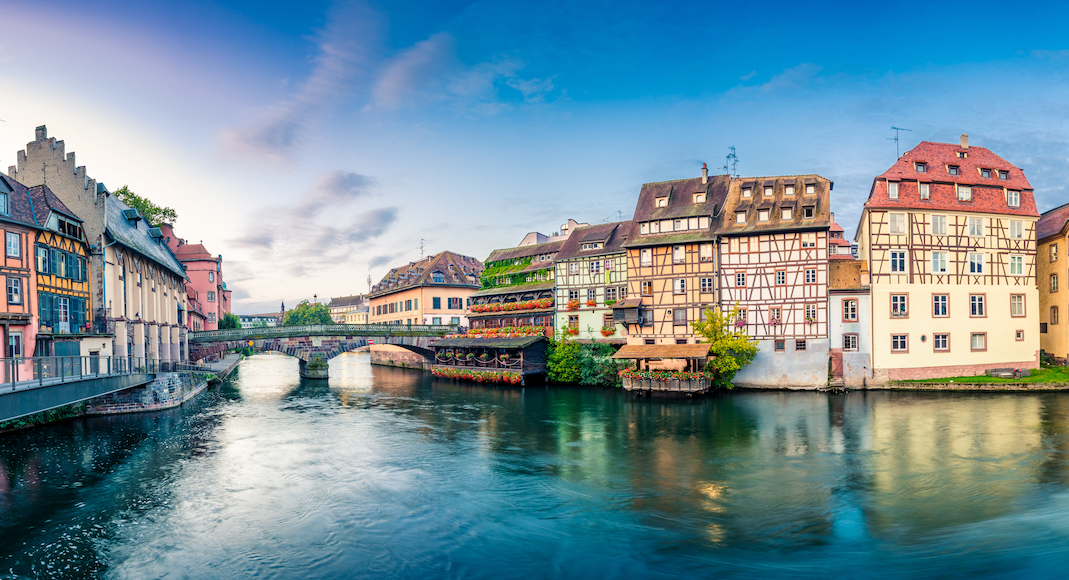 One of the fun things about staying in Paris is that, whenever you get bored of the city, you’re only a short train ride away from something completely different. Here are seven French cities that can be reached from Paris in less than two hours by train (in this case, Rail Europe) — perfect for a long weekend.

It’s just a quick jaunt from France’s capital to its culinary capital, the city of Lyon. Many of France’s most famous chefs, alive and dead, cut their teeth in Lyon, and the evidence is everywhere. If you’re able, shell out the big bucks at L’Auberge du Pont de Collonges, colloquially referred to simply as Paul Bocuse (for its founding master), or Les Trois Dômes. But it would be a crime if you didn’t also take a traditional Lyonnais meal at one of the dozens of bouchons around town. What to do when you’re done eating? Take in an opera, or perhaps some independent local theater with an avant-garde flair at Espace 44, Les Ateliers, or Théâtre de la Croix-Rousse. The city’s Roman history can be felt today at the real Roman amphitheatre at Fourvière, which is still used for a yearly summer festival, Les Nuits de Fourvière. The Musée de l’Imprimerie celebrates the city’s history as one of the earliest printing meccas, while remnants of the city’s massive silk industry like Trésor de Soie and Maison Combier are ideal for picking up high quality French silks for both you and those back home.

For a hipster trip: Lille

Once the capital of Flanders, now the World Design Capital, the city of Lille only became a part of France in 1667, but it has forged its own identity among the cities of France. Only half an hour from Belgium, the Flemish influence on Lille is still strong, something you can see if you stroll through Le Vieux Lille, taking in the historic French and Flemish architecture, now converted into modern shops and housing. The demographic skews towards the young, the international, and the hipster, thanks to the city’s reputation as a college town with a hungry job market and a high quality of life. Historically a market town, Lille is home to some excellent shopping, so head to the Marché de Wazemmes or visit in time for the annual La Grande Braderie to pick up souvenirs, or just a really good deal. More interested in looking, not buying? No problem, since Lille’s Palais des Beaux-Arts has France’s largest art collection after the Louvre.

For sommeliers in training: Bordeaux

The undisputed wine capital of the world, Bordeaux is the number-one place an aspiring sommelier should have on their travel itinerary. What’s that strange, almost cartoonish building on the river, you ask? Well, it happens to be the most exhaustive wine museum in the world, the Cité du Vin, whose constantly shifting appearance is meant to evoke the idea of “wine swirling in a glass.” A vineyard trip, preferably one arranged by the Bordeaux Tourism Bureau, is a must. But there is more than wine to experience in the city, which has in recent years gone through extensive renovation to return to its pre-Revolutionary glory. The Tour Pey Berland has some spectacular views of the city, but none are quite as impressive as the sight of the Place de la Bourse, an 18th-century architectural masterpiece, served up on a silver platter of a reflecting pool like the last course of a decadent Bordelais meal.

For the art lover: Rennes

A trip to Brittany will most likely land you in Rennes, known for its stunning cathedral and charming medieval architecture. Picassos, Rubens, and Botticellis fill the city’s Musée des Beaux-Arts, but its real artistic gem has more to do with flowers than art: the Parc du Thabor, a vast public garden done in both French and English styles. The best time to visit is in July, when the annual Tombées de la Nuit festival happens. One of France’s more adventurous arts festivals, the event fully takes over the city for a few weekends, with art installations, live music events, and sometimes, giant beached whales.

For the photographer: Strasbourg

There are few cities in France more reliably picturesque than Strasbourg. Whether dusted with snow or trimmed with spring flowers, the gorgeous half-timbered historic buildings of the Alsatian town look straight out of a fairytale. In a way, Strasbourg feels slightly out of time and place, probably because it has sat on the border of France and Germany for so long, a city that took on new, sometimes incongruous aspects at every turn of history. Among these, the Strasbourg Cathedral, which houses any number of curiosities, like its massive astronomical clock, whose mechanical procession of apostles and other figures everyday at noon contain some of the oldest automatons in recorded history. After a trip to church, a tasting test of the region’s local beers will be in order, with popular snacks like tarte flambée and bretzels to soak up the booze on your way to visit the European Parliament.

For the architecture lover: Dijon

More than just a mustard utopia, Dijon is the heart of the Burgundy region, and a town with some very deep roots. The city has some of the most well-preserved Gothic architecture in all of France, including the Musée des Beaux-Arts (fine arts) de Dijon at the Palais des Ducs de Bourgogne. There’s even the Museum of Burgundian Life, where highly realistic (if potentially creepy) scenes of everyday life in the 18th century are depicted, complete with life-sized mannequins in period attire. Or perhaps you want to do a little Burgundy vineyard tour. If you go in the fall, stick around for the annual International Gastronomic Fair in November. In addition to sampling wine and mustard (made with Dijon’s signature verjus, instead of vinegar), you’re going to want to get some seasonal gingerbread from Mulot et Petitjean, and try the region’s famous crème de cassis.

For a quick escape: Reims

The unofficial capital of the Champagne region, the city of Reims is only 45 minutes away from Paris by train. Perhaps spend a morning taking in the Reims Cathedral, a landmark with a twisting history, and the afternoon touring one of the many vineyards that surround the city. And of course you’ve been to a wine bar before, but have you ever been to a champagne bar? Sample Veuve Clicquot and Moët & Chandon in the region that produced them, perhaps even in the very same chalk cellars where they have been transformed from grapes into liquid gold.