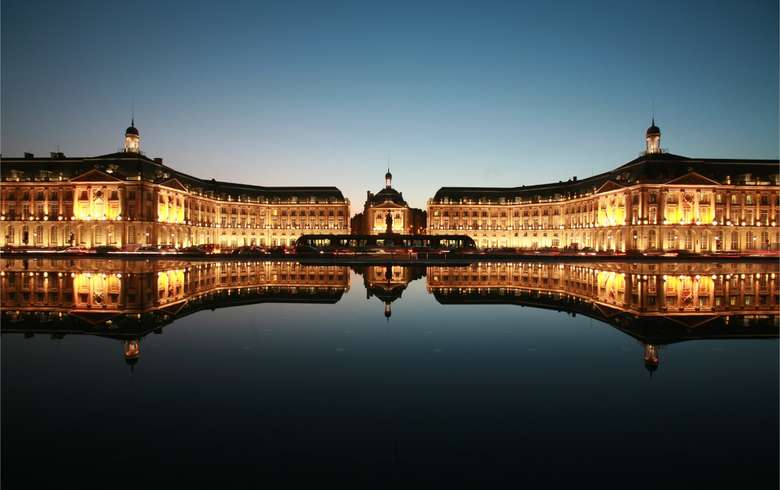 Bordeaux, the city once known as La Belle au Bois Dormant (“the Sleeping Beauty”) because of its laid-back reputation, has been revitalized by more than two decades of renovation into a lively travel hotspot. The city’s mayor, Alain Juppé, pedestrianized boulevards, restored neoclassical facades, and installed a high-tech public transit system, while a bevy of striking new buildings, such as the decanter-shaped Cité du Vin, rounded out the much-needed facelift.

Chosen as Lonely Planet’s Top City to Visit in 2017, Bordeaux has it all, from an enviable food and wine scene and modern museums, to elegant 18th-century architecture and winding medieval side streets. The city has come into its own and deserves to be seen.

As a primary point along the slave trade route, the port city of Bordeaux from the late 1600s to mid-1800s. This trade, along with selling wine, made Bordeaux its fortune which brought the city into its “Golden Age” in the 18th-century. Winding medieval streets were cleared to make way for grand squares, tree-lined avenues, and regal limestone buildings.

Two world wars arrested Bordeaux’s development, causing real decline in the post-war years. But in the 1990s, the city launched urban renewal projects, such as a tram system and landscaped quais to make the river more accessible. No longer a tired backwater city, Bordeaux became an elegant blend of old and new. At the heart of the UNESCO-listed city center, romantic parks and 18th-century warehouses now brim with chic bars and restaurants. The Garonne riverfront attracts visitors to monuments like the mighty Palais de la Bourse and shimmering Miroir d’Eau, and the new LGV Sud-Ouest line will cut travel time from Paris to just two hours, connecting Bordeaux to Europe’s high-speed train network. Here’s how to experience Bordeaux in all its splendor.

For rustic and hearty southwestern cuisine in a warm setting, head to the Bordelais institution La Tupina. The mainstay here is the fireplace, where soups simmer, tricandille (a grilled pork specialty) sizzles in the pan, and poultry and roast beef cook on the embers. – 6, rue Porte de la Monnaie, 33800

If you’re in Bordeaux, you came for the wine. Those in the know head to Le Bar à Vin. Housed in a beautiful 18th century hotel shaped like the bow of a ship, it’s the perfect setting to embark on an exploration of the entire Bordeaux spread — reds, dry and sweet whites, rosés, Clairets, even sparkling wines. What’s more, the bar is run by the Bordeaux Wine Council, so glasses here cost a fraction of what they do elsewhere. – 3 cours du 30 juillet, 33000

Sometimes you want the cream of the crop, and for that, there’s Le Millesime. Claiming to be the only bar in the city where one can order the premiers grands crus (highest class) wines by the glass, the bar specializes in wines like a 1995 Château d’Yquem. You may not know what that is, but it costs on average $313 for a bottle and they serve it by the glass. The bar’s vibe is made even better by DJs on weekend nights. – 4 rue du Puits Descujols, 33000

Bordeaux’s glamor lies also in its history. The iconic Place de La Bourse is the shining example of 18th-century extravagance under the reign of Louis XV. Just opposite is Miroir d’Eau, or water mirror, the most-photographed site in Bordeaux. – Quai du Maréchal Lyautey, 33000

From there, walk to the nearby Cathédrale Saint-Andre, Bordeaux’s most beautiful religious monument. A towering Gothic cathedral dating back to the 11th century, 13-year-old Eleanor of Aquitaine married her first husband, King Louis VII of France, here in 1137 – Place Pey Berland, 33000

To see how far Bordeaux has come in recent years, visit La Cité du Vin, a stunning piece of contemporary architecture resembling a wine decanter on the banks of the Garonne. Something between a museum and a theme park, the mega-project cements Bordeaux’s position as the world capital of wine, and covers everything from grape varieties to the ancient wine trade to 21st-century wine trends. A glass of wine, or grape juice for the kids, rounds out the tour. – 134 Quai de Bacalan, 33300

The visit is not complete without a trip to the terre itself. This small-group, Saint-Emilion and Pomerol day trip from Bordeaux takes visitors to two regions north of Bordeaux — Saint-Emilion and Pomerol — to visit three wine estates and a UNESCO-listed medieval village, with two tasting sessions during the day. The 8-hour tour departs in the morning from Place des Quincones in Central Bordeaux. Book the tour here.