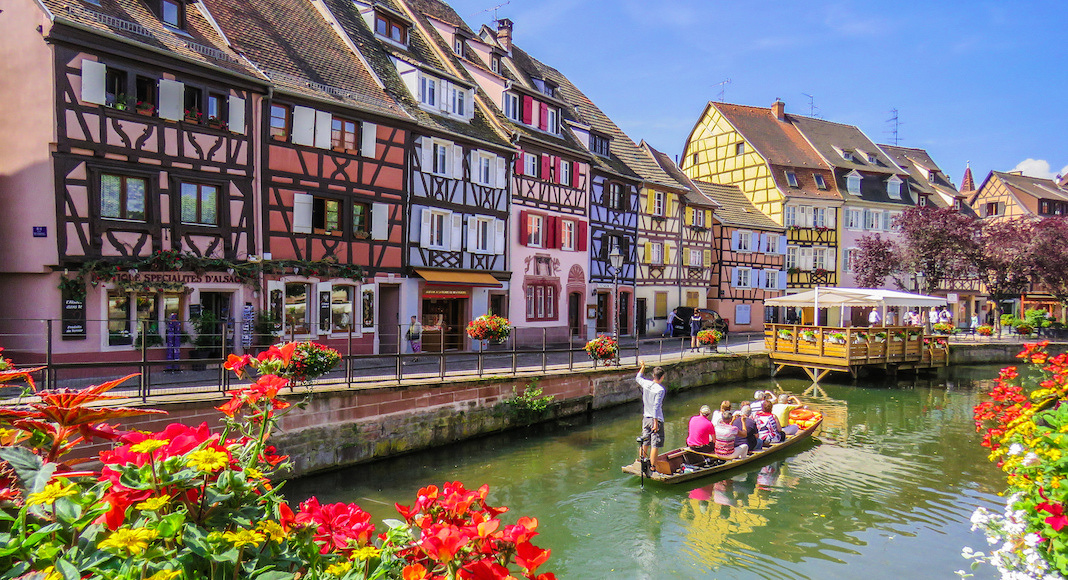 Most of the fairy tales we’ve grown up with stem from French legends—Cinderella, Sleeping Beauty, Little Red Riding Hood… And it’s not surprising, once you see the kind of Epcot-level magical towns that still exist all over France. Just goes to show your fairytale fantasy of France could be a reality in these seven tiny towns.

Located just a few miles from the French-German border, Colmar looks like something plucked from the imaginations of the Brothers Grimm. The half-timbered medieval buildings, cobblestoned streets, and Gothic churches will make you feel like you’re strolling through the opening number of Beauty and the Beast. The village even has a section dotted with canals called “La Petite Venise.” Considered the capital of the Alsatian Wine Route, this is a perfect spot to find a quaint pub, order a glass of Riesling, and enjoy the spectacular view.

Imagine an island rising from the sea, a tiered wedding cake of spires and winding walled roads connected to the mainland only by a frail wisp of a causeway. This is the unspeakable majesty of Mont Saint-Michel. The island commune in Normandy is home to only 44 people, but 3 million visit each year to see the castle that has served at times as monastic abbey, prison, and fortress.

One of the oldest medieval towns on the French Riviera, Saint-Paul-de-Vence is a haven of lush greenery and ivy-draped houses. The seaside town is known for its art galleries like the Fondation Maeght and studios where you can watch contemporary artists at work.

Brightly colored buildings, clear blue canals, and châteaus that will have you dreaming of princes and beasts. What more could you want from the perfect getaway that is Annecy? The alpine town in southeastern France is known as the “Venice of the Alps” for its canals, which pour into the Lac d’Annecy. Legend has it that if you kiss your lover on the uber-romantic Pont des Amours, you will seal your fates together until death. But for those traveling solo (or unsure about “death do us part”), there are countless other beautiful things to see, like the restaurants and cafes that spill onto the canaux as though they were the boulevards of Paris.

The ancient walled city of Carcassonne is the most-visited tourist attraction in France after the Eiffel Tower, and it’s easy to see why. The medieval fortress, added to the UNESCO World Heritage list in 1997, is surrounded by high stone walls and dotted with turrets, towers and drawbridges. It was allegedly the inspiration for Walt Disney’s Sleeping Beauty castle, and you might recognize a lot of the architecture from the animated film.

Skipping now to the Côte d’Azur, the stunning hilltop views from the small town of Èze will make you glad you chose this quiet gem over more touristy hubs like Nice and Cannes. Stone houses cut into the sides of the mountain, covered in fuchsia bougainvillea, create a unique landscape filled with adorable cobblestoned side streets and cacti gardens.

If you’re ready to head out of the castle and “into the woods,” you’ll want to try the fortified town of Vouvant. Surrounded by forest on all sides, most of the town looks like it hasn’t been updated since it was built in the 11th century. It even has its own fairy tale about the Mélusine Tower, which legend says was built by the fairy Mélusine so that the knight she married might become known as a powerful lord throughout the land.

One of the most well-preserved towns in Brittany, Vitré has always been a wealthy city with an important place in French history. The slate turrets of its many castles (including the Château de Vitré) overlook Gothic streets of half-timbered houses, like Rue de la Poterie, which contains a number of bizarre porch houses built on stilts.

For a winter wonderland that will transport you straight to Santa’s workshop in the North Pole, head to Chamonix-Mont-Blanc, a ski resort town near the border of Switzerland and Italy. Surrounded by snowy Alps all year long, you can take the world’s highest cable car to a terrasse from which you cab see the entire valley laid out in panoramic view. Fun fact: Chamonix hosted the first Winter Olympic Games in 1924.