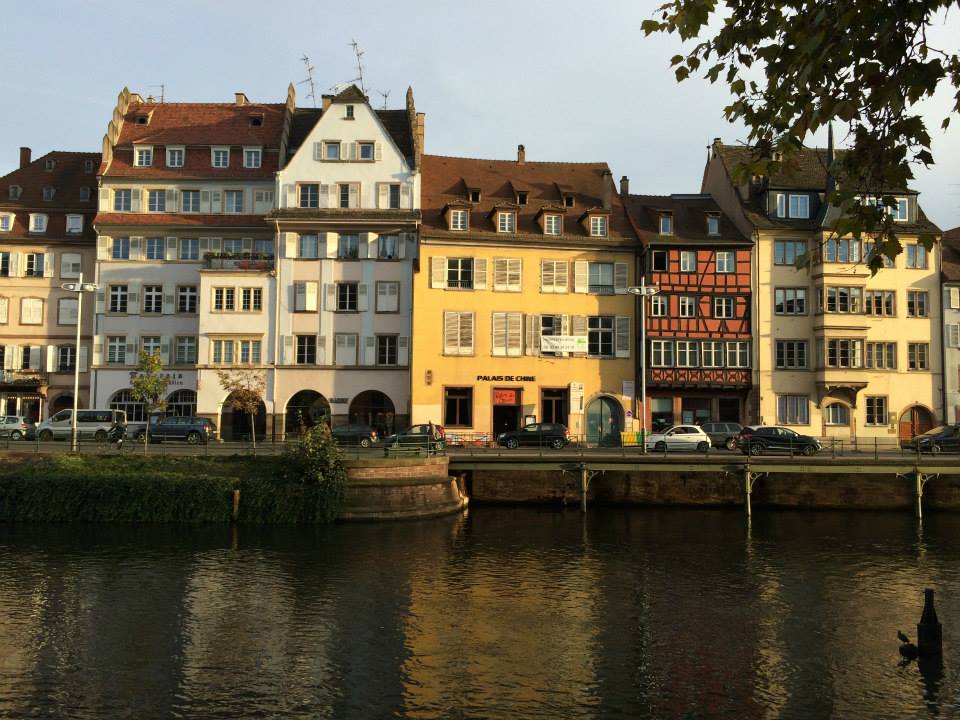 Strasbourg’s defiantly Germanic namesake somehow nestles snugly into the cozy, rainy valleys of eastern France. A satisfying blend of these two opposing cultures, Strasbourg walks the tightrope between the laid-back manner of the French and the punctual people of Germany.

Capital of the multi-syllabic Alsace-Champagne-Ardenne-Lorraine region, Strasbourg’s chameleonic history gave birth to a language – Alsatian – that reflects its disputed past. Founded in 12 BC, Strasbourg was initially known as Argentoratum. First ruled by the Celts, the region was decidedly Gallo-Roman in origin for many years. However in the early 5th century, the Alemanni and other Germanic tribes invaded, occupied, and settled the area, renaming it Strasbourg.

After remaining under German jurisdiction for centuries, Strasbourg declared itself a free republic in the 1300s. The city became a Protestant hot spot during the Reformation and witnessed the creation of Johannes Gutenberg printing press, invented in Strasbourg in 1440. The city seemed decidedly German…

…until Louis XIV came along and, looking to increase the size of his kingdom, annexed Strasbourg. By the use of excessive force, the ‘burg became the ‘bourg on September 30th, 1681. Strasbourg’s region changed nationalities four more times, causing some citizens to possess two passports in their lifetime. For a more in-depth and moving picture of Strasbourg’s history, head over to the Musée Historique de Strasbourg (2 Rue du Vieux Marché aux Poissons) for an interactive exhibit available in multiple languages.

By far the most breathtaking sight in the city is the fabled cathedral. No matter where you end up in Strasbourg, you can likely spot the Cathédrale de Notre Dame’s tall north tower, an excellent guidepost for finding your way around amongst the bilingual signposts. With construction of the foundations undertaken in 1015, the building recently fêted its 1000th birthday.

Provided you have no fear of heights, small spaces, or an impressive leg workout, climb to the very top of the church for spectacular panoramic views of the city. Scan the detailed sandstone for various creatures and characters invisible to those with both feet planted on the plaza’s stones far below.

A glimpse inside the cathedral cannot be overlooked but perhaps not for religious reasons, for within the cathedral’s belly ticks a curious astronomical clock. Just before noon, the cathedral closes to the public and opens only to ticketholders sneaking a peek at the historical timepiece, constructed in 1843 and outfitted with multiple automata and sound effects.

From there, the best way to see the city is by foot. Follow the river around the Grande Ile and take a peek at the Eglise St. Thomas (11 Rue Martin Luther), the museum-filled Palais Rohan (2 Place du Château), and the many bridges connecting the historical center to the rest of the metropolis. Eventually, the canals will bring you to Petite France, arguably Strasbourg’s biggest tourist attraction. Freckled with half-timber houses and cobblestone streets, the area hides tasty restaurants and excellent photo opportunities.

While in the region of Alsace, ordering choucroute is essential. Composed of sauerkraut and an assortment of meats (sausages, ham, and bacon), it’s tangy but satisfying. If opposed to meat, one restaurant of repute serves it with fish. The Maison Kammerzell (16 Place de la Cathédrale), built in the 1400s, offers three levels of exquisite dining opportunities right next to the Cathedral. While a pricy choice, it’s worth the splurge on their three fish sauerkraut. Oh, and be sure to try an Alsatian wine – Gewürztraminer or pinot noir – with your meal, served in the traditional green-tipped glasses.

Cabbage is not Alsace’s only claim to fame, however. The tarte flambée, or Flammekueche, requires sampling during a trip to Stras. Find the best deal at Au Brasseur (22 rue des Veaux), one of the few restaurants with non-stop service at odd hours of the day. Renowned for brewing their own beer, their varied menu touts multiple tartes flambées (including vegetarian options) and prices that won’t break the bank. Dine between 5pm and 6:30pm to take advantage of their “Happy Flam’s” deal: 3 euros per tarte.

For other regional specialties, La Corde à Linge (2 Place Benjamin Zix) is not to be missed and be sure to sit outside on the terrace. While here, try a Picon bière (an almost-shandy made with beer and orange bitters) with a plateful of spätzle. Word to the wise – their portions are generous and can certainly be split between two mouths.

As to desserts, Strasbourg boasts an excellent patisserie that also serves a tasty lunchtime meal. Christian (10 rue Mercière), located just in front of the Cathedral, serves confections so attractive one hardly dares eat them…and their various hot chocolates are sure to please. For a more traditional treat, stop by Woerle boulangerie (29a rue des Imprimeurs) for some kougelhopf, pain d’épices, and tarte au fromage blanc.

For those long rays of afternoon sunlight, it would be foolish not to check out the various barge-restaurants located along the Quai des Bateliers. Grab a drink outside, stay for a meal, or even try your hand at dancing the night away on the Barco Latino, le Rafiot, or Café Atlantico.

While Strasbourg benefits from an excellent train station and tramway service, if looking to see the region without a permanently furrowed brow, rent a car from the various services at the Gare de Strasbourg. Drive the Route des Vins and discover not only excellent wines, but irresistible small towns ideal for a weekend getaway. Be sure to visit Riquewihr, a 16th century town largely untouched by WWII, and Ribeauvillé, known for its summer wine festival.

If renting a car is out of the question, hop on the commuter train to Colmar. The 30-minute trip will drop you into a multicolored city with various museums, including one dedicated to Frédéric Bartholdi, the sculptor of the Statue of Liberty. Be sure to walk through “Little Venice” and view the small waterways crossing the old city streets.