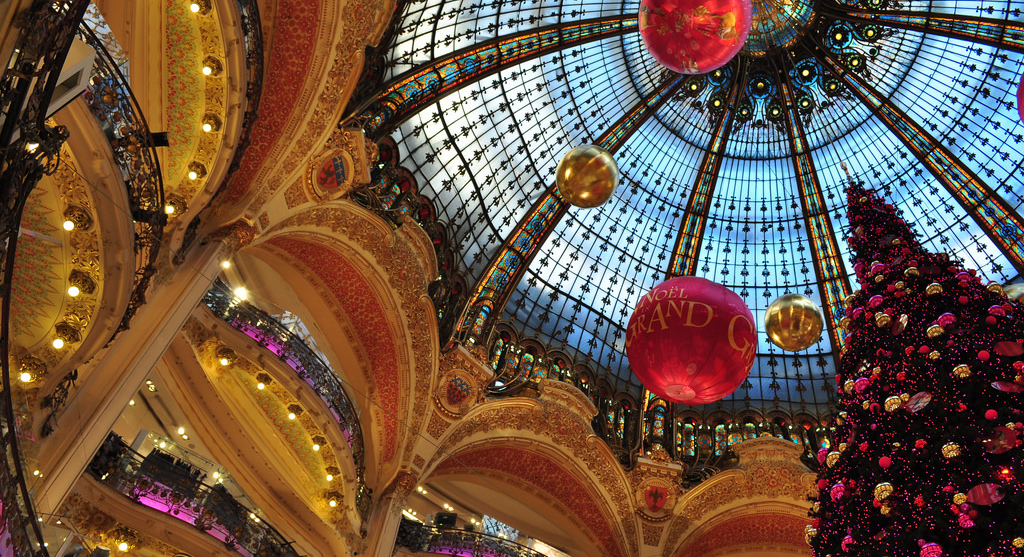 14 Things to Do in Paris this December

Check out our updated list of things to do in December 2019 here. There’s even more suggestions of how to enjoy Paris in December!

This year you’ll have your pick of four skating rinks to choose from in Paris. You can skate for free at Les Halles (December 8 to January 6) and in the Tuileries (November 24 to December 6). For 7€ to 12€ you can skate on top of la Grande Arche at La Défense, 110 meters up in the air (open December 8 to January 6, skate rental is 3€). Finally, head over to the Grand Palais’s giant indoor rink (December 16 to January 9) for a skating experience that starts at 17€. (For something truly special, go between 9pm and 2am for a nightclub-style skate.)

2. Check out the Michael Jackson Exhibit, “On the Wall”

From late November to February 14, 2019, the Grand Palais is hosting a retrospective of Michael Jackson’s career to honor the 10th anniversary of his death. The chronological showcase follows MJ’s career from his young days as a part of Jackson 5, to his climb to fame as an international pop star, to his death in 2009. Tickets for this exhibit are only €12 for full price and €9 for reduced price. (We recommend buying tickets online so you don’t have to wait in line to go in.)

The number one spot for viewing holiday lights in the City of Light is on the famous Champs-Elysées. Strung up the trees and down the street in luminous, multi-colored bulbs, it’s a real sight to see. Other spots for holiday lights include Faubourg Saint-Honoré, Avenue Montaigne, Saint-Germain-des-Prés, Bercy Village (walk through the Cour Saint-Emilion for the best view), and Place Vendôme, which is decorated with Christmas trees. New this year, head to Boulevard Haussmann and download the #ONLYHAUSSMANN app to test out and play with the colors of the holiday lights strewn across the building facades.

For the best window displays, the first stop should be Galeries Lafayette. Outside you’ll find their maybe-better-than-Saks-Fifth-Avenue animatronic windows, and inside you’ll find their massive annual Christmas tree under the coupole. Then head to Printemps nearby, through Place Vendôme, toward the Seine for BHV Marais, and finally to the Rive Gauche for Le Bon Marché’s holiday displays.

4. Get tickets to Jean-Paul Gaultier’s “Freakshow”

Famous fashion designer Jean-Paul Gaultier brings his creations and signature flair to the Folies Bergere stage with his cabaret-fashion show “Freakshow.” The show has been widely praised for its creativity, vibrant choreography, and fantastic outfits. It’s only on stage until December 30, so you’ll want to get your tickets now before it’s too late.

Vin chaud is hot wine — or mulled wine, as we call it in the United States — and it’s delicious. A classic winter treat to warm you up both inside and out, you can drink vin chaud at many places in the city for just a few euros. The place you’ll definitely be able to find vin chaud is in the holiday markets. Get yourself a glass for a few euros and peruse the stalls because, hey, it’s France, it’s fine to wander the streets with a to-go cup of hot wine! That’s the true European experience.

6. Walk through the Festival of Lights at Jardin des Plantes

For the first time ever, the Jardin des Plantes is getting in the holiday spirit with an impressive festival of lights. Open until January 15, 2019, this exhibit is open between 6pm and 11pm for anyone who wants to walk through a menagerie of giant animals illuminated from the inside. Snakes wrap around trees, flamingos stand in flocks beside the pathway, turtles wave their fins and hippos shake their heads in the air. Get tickets here.

The Kiev Opera Ballet Theatre returns to Paris for the first time since 1964 to perform the Christmas classic, The Nutcracker. A legendary piece by Tchaikovsky, this is a perfect performance for people of any age looking to really feel that holiday spirit. From December 23 to January 6, this ballet will be performed daily in the Théâtre des Champs-Elysées. Get your tickets here (tickets for children under 12 are significantly cheaper, so it really is a perfect family activity!).

Many people in France are at churches and cathedrals for religious reasons around the holidays, but you can certainly be there to appreciate a little classical music in a beautiful setting. Cathédrale Notre-Dame de Paris will host a Christmas concert (Dec. 18) and a night of Gregorian chants (Dec. 28). Vivaldi’s The Four Seasons (Dec. 5), Händel’s Messiah (Dec. 14), and a night of Christmas classics (Dec. 6) will be performed at La Madeleine. For a full list of classical music events happening in Paris in December, click here.

Though it’s no Strasbourg, the Parisian holiday markets are impressive. In the Tuileries, at Hôtel de Ville, along La Défense, below Notre Dame, in Saint-Germain-des-Prés, at Beaubourg, at Gare de l’Est, in the 15th arrondissement, at les Halles, at the Féeries d’Auteuil, and more, the Christmas markets abound with gifts, edible treats, and goodies that you’ll gift to yourself. Of course, if you want to get off the beaten path, there are other holiday markets to check out like the three put on by Le Hasard Ludique, #afro, #ethique and #madein18e, the Anglophone market at St. George’s Anglican Church, or a Nordic holiday market at La Recyclerie. Obviously, some will be more crowded than others, but avoid peak hours and you’re sure to delight in the tradition.

10. Check out a few art exhibits

You’ll probably want to warm up inside after all that walking through holiday markets and to see the light and window displays, so why not check out a few exhibits. Before Picasso became a cubist master, he had his lesser-known blue and red periods, which are currently on display in the “Picasso. Bleu et rose” exhibit at the Musée d’Orsay. In the Musée du Luxembourg, one of the greats of the Art Nouveau movement, Alphonse Mucha, is featured in an exhibit tracing his career as a painter, a sculptor, a photographer, and a decorator. At the Fondation Louis Vuitton you can peruse the widely acclaimed Jean-Michel Basquiet exhibit. Basquiet, born in New York, is one of the most significant painters of century, famous for depicting African American culture.

11. Get raclette at Il Cottage

Several diverse spaces make up this mountain-themed, restaurant-bar-hangout spot called Il Cottage. Have dinner or a pizza by the fire at the restaurant, order a glass of wine at the outdoor food truck (which includes a heated, covered space to sit down), or head to the heated terrasse for a happy hour or chill night with friends. Perhaps one of the most unique aspects about this space is the way they transition from summer vibes to a winter mood: when the cold rolls in, bring on the yurt, giant stuffed polar bear, skis and snowboards, and cold-weather food like fondue and raclette. – 1 Boulevard Lannes, Paris 75116

The Olympics were just earlier this year, but it’s left a hole in our hearts that can only be filled by good, old-fashion handball. From November 29 to December 16, the Women’s European Handball Championship will be taking place in France, with five matches taking place in Paris (get tickets to those five matches here). In addition to playing in Paris, the teams from 16 countries will play each other in Nantes, Nancy, Montbeliard, and Brest. The best news? The US isn’t competing, so cheering for France will be guilt-free. See the full schedule and find out more here.

13. Listen to cool music at Africolor (Until December 18)

Back and for its 30th year, Africolor puts “African music” in the spotlight. The organization themselves put “African music” in quotes, because the festival is founded on the idea that there’s one family of “African music” that contains characteristics like polyrhythmic sounds, lack of meter, and particular vocal qualities. All of the music that grounds itself in the qualities of “African music” are highlighted in this festival, whether they be from the Caribbean, the Indian Ocean, Brazil, Mali, or anywhere in between. Three performances in December will take place in Paris, while the rest will happen in the nearby suburbs. The schedule of performances is available here.

14. Have a fancy night out at Cinderella

Cinderella is one of the quintessential ballets to see. From November 26 to January 2, the Opéra Bastille will present the famous fairytale ballet, with music by Serguei Prokofiev, and directed and choreographed by Rudolf Noureev. Treat yourself to a fancy holiday outing with dinner and a night at the opera. Get your tickets here now, and be sure to check out their list of discounts and special ticket rates here.