Witch season is upon us (and some may say it never ends, a subject The New York Times recently delved into in an article, “When Did Everybody Become A Witch?”) But Paris has a long history of fascination with the occult, particularly in its Belle Époque heyday, and there are still a few places in the city rife with witchiness and wonder. Here are some of our favorites.

La Maison de la Radiesthésie, or “House of Divination,” is the oldest (and one of the last) esoteric stores in Paris. You can buy wands, pendulums, and divination rods, starting in a reasonable 10€ range, and working up into the designer realm. — 22 Rue Godot de Mauroy, 75009

And of course, there’s nothing better, when you’re in the mood, than a good ol’ fashioned haunted house. Le Manoir de Paris has been putting up its trademark “Legends of Paris” show for about a decade, featuring all kinds of creepy and gruesome characters from Paris’s history. Keep an eye out for special events like their annual Halloween show, and a performance called “Dark Night” that occurs every Friday the 13th. — 18 Rue de Paradis, 75010 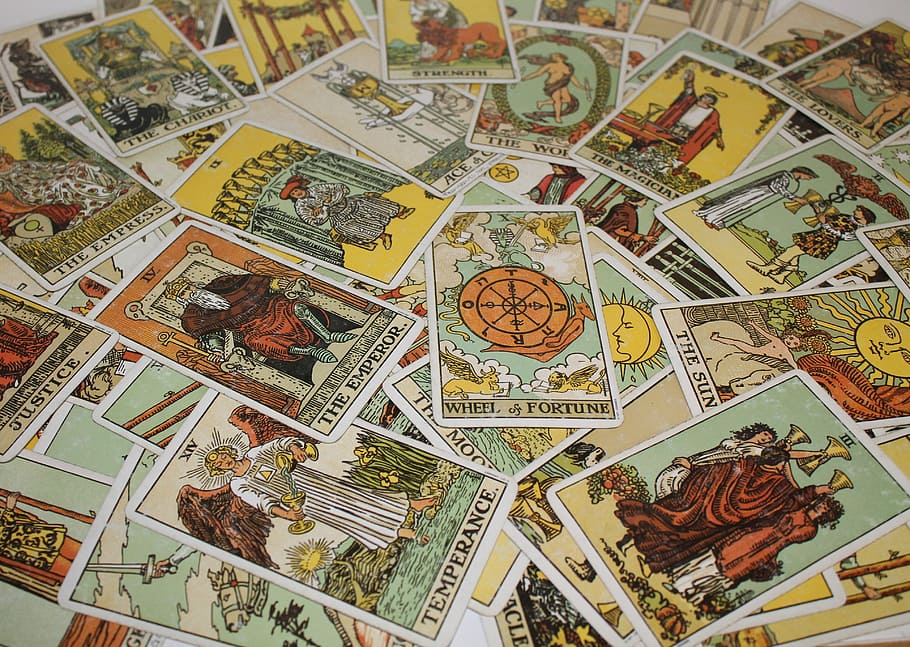 A bookstore that refers to itself as a “Librairie Ésotérique,” Arc en Ciel is a place for anyone who needs an non-ironic crystal ball or tarot cards. Among the books, find anything on topics ranging from reiki and aromatherapy to yoga and plant care. They host workshops, seminars, and meet-ups for those inclined towards the spiritual and the occult. — 3 Rue Jean-Macé, 75011

Brésilophile in Passage Jouffroy is a great place to find any kind of rare or exotic crystals you need to perform whatever witchcraft you’ve learned from your reading at Arc en Ciel. Loose beads, precious stones, and even an esoteric crystal collection should cover anything you’re looking for, from rose quartz to tourmaline. — 40 Passage Jouffroy, 75009 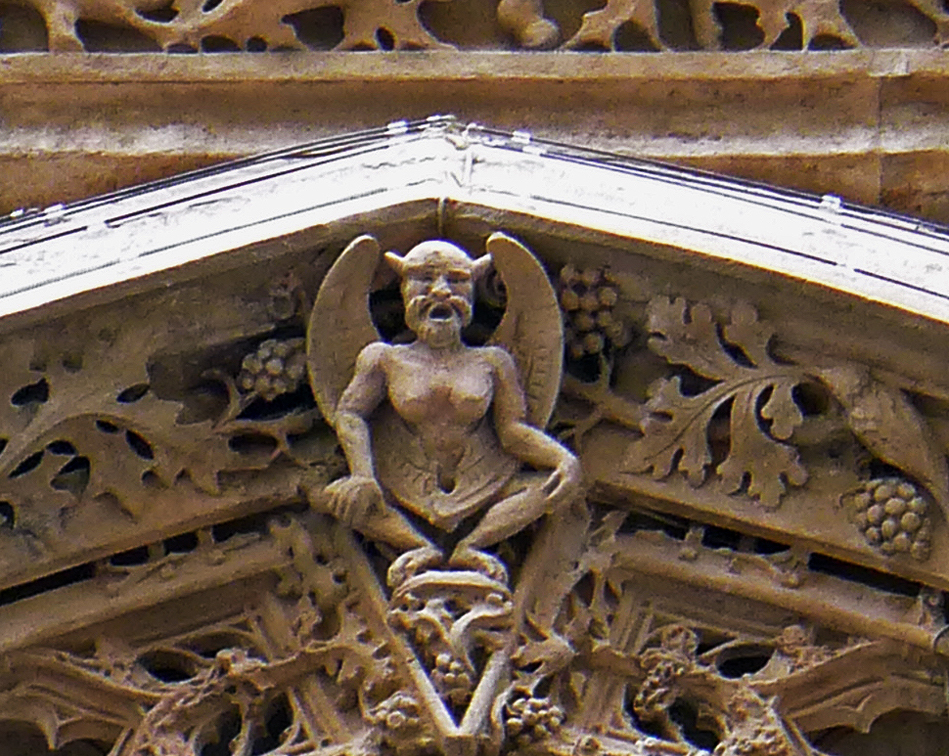 You might recognize the Church of Saint-Merri, because it sits right beside the Stravinsky fountain, and one of the more famous murals of the Marais. But this medieval church got some surprising sprucing up in the mid-1800s, when a Baphomet was carved above the entranceway. The demonic figure is heavily used in Satanism, and among the Knights Templar, and its accompaniment by a prominently-placed stained glass depiction of a pentagram makes this one curious church. — 76 Rue de la Verrerie, 75004

For one-of-a-kind trinkets, statement pieces, and magic charms, try the office of Xenia Rybina, a Parisian witch, illustrator, and fashion designer come to France by way of Russia. “Everything is witchcraft around [us]…” Rybina says in an interview with Messy Nessy Chic at her home/workshop in Paris, which she lovingly refers to as her “coven.” And with a snake named Seraphim and a cat named Lucifer, it’s easy to believe that everything is witchcraft around Xenia Rybina, whose berets embroidered with eyes and tiny, exquisite spider dolls have an effect at once whimsical and uncanny. — Xenia’s work will soon be available in her e-shop. In the meantime, she’s selling items via Instagram (DM her for prices).

Hidden in a backstreet of Montmartre, in front of the Hotel Particulier Montmartre (one of the most exclusive boutique hotels in the city), is a lumpy hunk of rock called the Rocher de la Sorcière, or Witch’s Rock. The rock, and the entire passage, was named for the old woman who lived in the house, called la soucière, or “the dowser.” (In case you’re wondering, a dowser is someone who uses a divination rod.) No one quite knows where it came from, but some believe it might still have some powerful magic inside. — Passage de la Sorcière, 75018 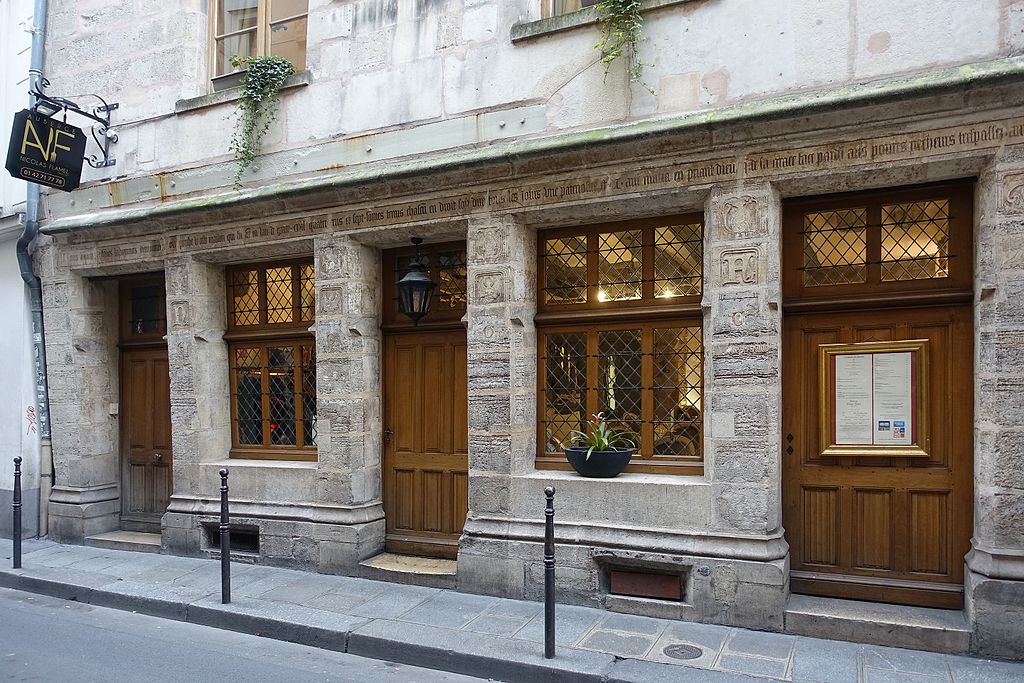 Though the interior has been refurbished into a modern restaurant, the exterior of the Auberge Nicolas Flamel is the same simple stone facade that was built to be an inn in 1407 by Nicolas Flamel and his wife. This makes it the oldest stone building in Paris, a pretty impressive feat in such a well-preserved city. If the name Nicolas Flamel rings a bell, you might recognize it from Harry Potter and the Sorcerer’s Stone. Both in the book and in real life, Flamel, probably the most recognizable name in the history of alchemy, was famous for allegedly creating a “Philospher’s stone,” which not only had powers such as transforming ordinary metals into gold but gave it’s owner immortality into perpetuity. — 51 Rue de Montmorency, 75003