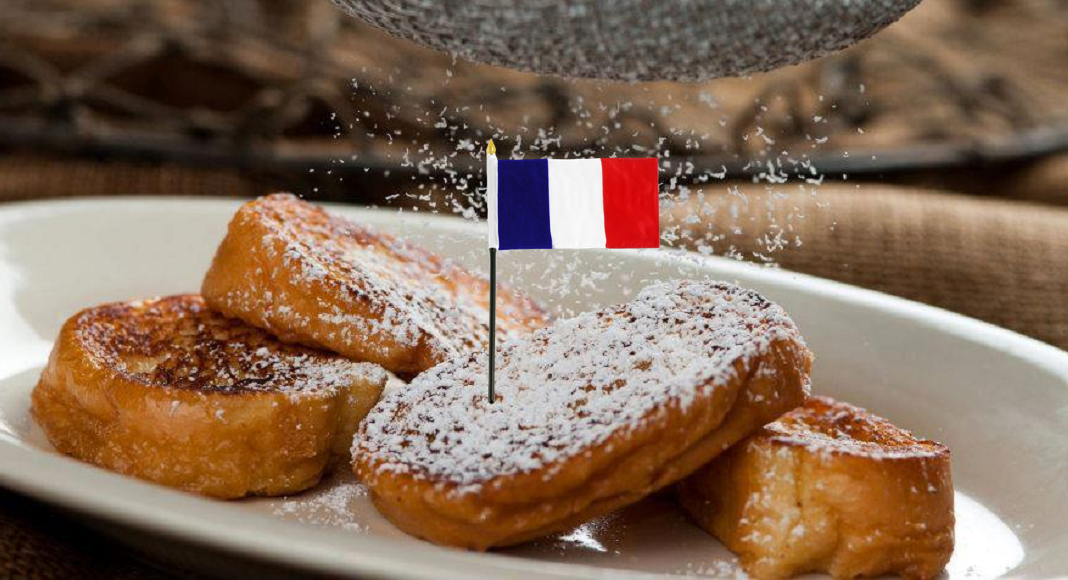 We’ve all heard of French toast. This delicious treat of bread (maybe even stale bread) that’s been transformed into a smooth and tasty breakfast dish with a simple blend of eggs, milk, and sugar.

In France, French toast is called “pain perdu” (lost bread) because you use stale bread to make it. In the United States, this same breakfast treat is known as “French toast.”  But is French toast really French, and, if not, why do we call it French toast?

In the collective imagination, French toast comes from a desire to not waste food, simply for economic reasons, but also because throwing away bread, with its religious connotations, was socially unacceptable. Experts agree that French toast dates back to ancient Rome. A similar recipe can be found in the book of Apicius from the 5th century BC. The Romans dipped slices of bread in milk (and sometimes eggs) before frying them, and called it “Pan Dulcis.”

We find the trace of the same recipe in the 15th century at the court of Henri V where the “lost bread,” as it was then called, was a hit. It was not until the 17th century that the term “French Toast” appeared in England (in 1660, to be precise, in a book called The Accomplisht Cook, according to The Oxford English Dictionary). This would be in line with one of the theories developed about French fries which is that the name “French” does not designate from the country of origin of the dish, but is instead in reference to the verb “to French” which means “to slice” in Old Irish. Hence, “French toast” as in “sliced toast.”

As for how Old Irish ended up in the United States, after the Great Famine (1845-1851), Irish settlers traveling to the United States and Canada brought the term in their suitcases. The phrase “French toast” first appeared in The Encyclopedia of American Food and Drink in 1871. Although, this explanation seems less likely since similar recipes were also called “Egg toast,” “Spanish toast,” and even “German toast.”

This explanation would also then contradict the legend that French toast was invented in 1724 by a certain Joseph French in Albany, New York, and whose poor grammar made him forget the apostrophe-“s.”

The most convincing explanation is that French toast would have been called “French” because calling it French made the dish seem fancier and allow chefs to add one or two dollars to its price. “Traditionally in the United States, we have an admiration for French cuisine, which we consider to be elaborate and gastronomic. And that’s probably why this dish was named that way. It’s just marketing,” explained Stephen Block, editor-in-chief of the Kitchen Project, a site specializing in the study of the origins of recipes. “The name sounds good and the French adjective gives it a high-quality connotation. There’s no chance that ‘Lost Bread’ could have worked. And since the dish was successful and the recipe was easy, the name spread.”

This confirms the idea already proven by the origin of “French” in French doors that, in the minds of the English at the time and the Americans afterwards, if something was French, it had to be good. In any case, French toast is now much more popular in the United States than it is in France (go try to find some in a café in France, we dare you!). French toast is even entitled to its own national day, November 28.