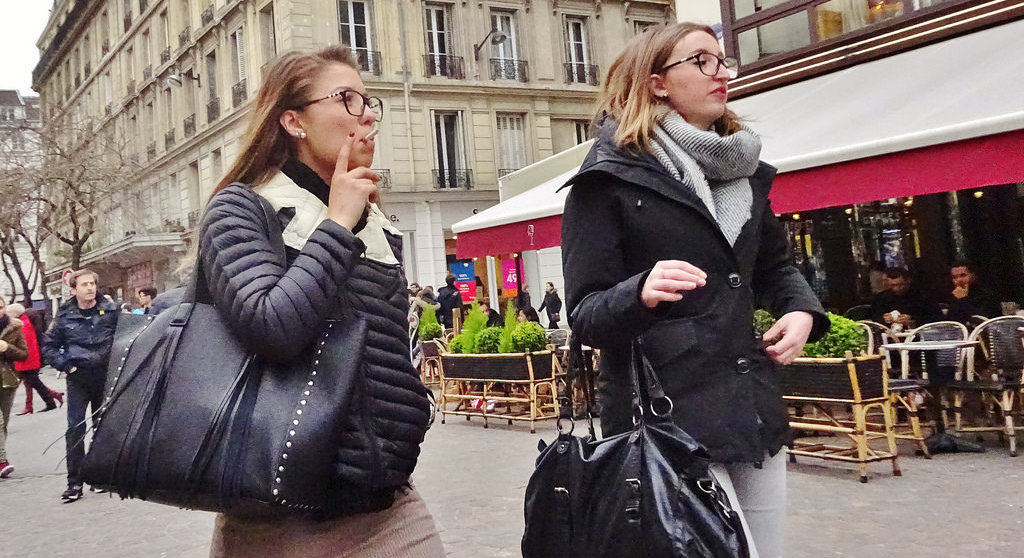 When you visit Paris, you’re forced to smoke. No one will be shoving a cigarette between your lips, but you’re breathing enough polluted air that you might as well be smoking.

A study released Friday by the NGO European Transport and Environment Association (T&E) showed that staying in Europe’s major cities just for just four days would have the equivalent effect on your health as smoking one to four cigarettes, depending on the city.

In Paris, for a four-day stopover in the city, breathing the air is as bad for your health as smoking two cigarettes.

The parallel between air pollution and smoking cigarettes is based on the research of Berkeley Earth, an international climate association research. T&E combined that data with real time air quality and tourism figures to provide an estimate of the pollution risks tourists face in European cities.

“According to Berkeley Earth, the most harmful pollution consists of small particulate matter, 2.5 microns in size or less. These particles are small enough to work their way deep into the lungs and into the bloodstream, where they trigger heart attacks, stroke, lung cancer and asthma,” writes France 24. “It shows that breathing 22 micrograms of fine particles has the same health effects as smoking a cigarette.”

Breathing the air in Paris for a year has the equivalent harmful effects of smoking 183 cigarettes, or slightly over 9 packs.

Often actively choosing to go places on foot, eat on terrasses, and participate in outdoor activities, tourists in Paris are breathing very polluted air without knowing it. “Right now, tourists, including kids, are more or less forced to smoke, in terms of the health impacts,” says T&E air quality and diesel coordinator Jens Müller. “When air pollution is bad, we are told to avoid eating or exercising outside. But walking around cities and eating on restaurant terraces is what city [vacations] are all about.”

Air pollution is a serious issue in Europe. Individual countries all over the continent are facing legal backlash for poor air quality. Romania and Belgium are going to court for rigging air pollution monitoring systems, while the UK, France, Germany, Italy, Hungary, and Romania face billions in fines from the EU’s governing body for breaching the bloc’s air pollution standards.

According the the EU Environment Commission, 400,000 premature deaths per year are linked to polluted air.

France, for its part, has been making efforts to become a more eco-friendly, greener country. Since January 2017, thin plastic bags have been banned in French supermarkets. In 2020, France will implement a law ensuring all plastic cups, cutlery, and plates are compostable and made from biologically-sourced materials. The mayor of Paris, Anne Hidalgo, has been making major pushes to get her city to go green, including by rebuilding urban infrastructure to favor pedestrians and bikers. Paris aims to be free of diesel cars by 2024 and gas cars by 2030.