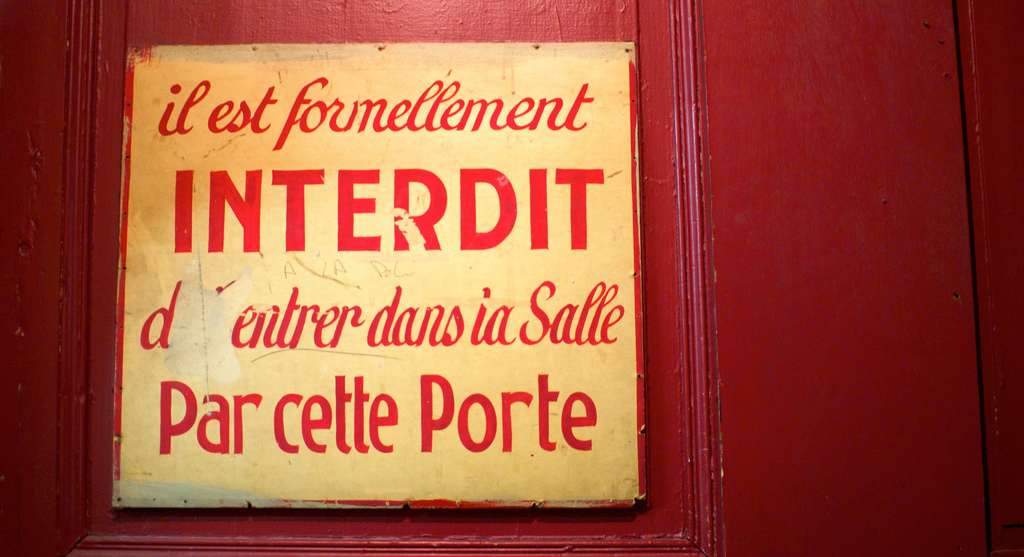 10 Things France Has Banned or Wants to Ban

The French are known to love rules. Some are unspoken: Always say, “Bonjour Madame.” Never ask for ketchup at a restaurant.

But others — in fact, many others — are clearly delineated. For such a liberated country, the French sure have banned a lot of things. Some of these bans are good, like no work emails on the weekends. Some are more controversial, like the ban on full-face veils.

Here are 10 things that France has banned or may soon ban:

Last May, a bill passed by parliament in 2015 finally came into effect, banning models with an unhealthily low body mass index. The ban was enacted in order to dissuade models from trying to attain “unrealistic” body standards, and to reduce the rate of anorexia, which affects 30,000-40,000 French women, according to BBC. Employers of super skinny models could face up to six years in prison and a 75,000 euro fine.

For fashion brands thinking they can skirt the super skinny models ban with a simple photoshop job, think again. In October of last year, France also made it illegal for companies to digitally enhance images of models, unless they clearly indicate that the photo has been edited.

2. Responding to work emails on weekends

Did you get the memo? Well, if it was sent over the weekend, a new French law states you’re not required to answer it until Monday.

The law passed in 2016 and took effect in the beginning of 2017. It ensures workers at companies greater than 50 people the “right to disconnect,” meaning employers are not allowed to punish workers who don’t respond to emails after hours.

France wants you to picnic responsibly. No plastic cups, plates, or cutlery — and no food waste!

In 2016, France passed a law requiring all plastic cutlery to be made of compostable material starting in 2022. They also banned supermarkets from throwing away unsold food, with all unsold food sent to food waste charities.

Former US President Ronald Reagan may have once called ketchup a vegetable. But in France, ketchup isn’t even considered healthy enough to serve in large quantities in school cafeterias. In 2011, France passed a law that banned spreading the viscous, red vegetable on everything except, ironically enough, french fries.

Perhaps the most ignominious ban on this list, in 2011 France became the second European country after Belgium to ban the full-face veil, or niqab, in all public spaces. This decision set off a fierce debate across France, and gave fuel to the far right, including the at-the-time recently appointed leader of the Front National, Marine Le Pen.

It also paved the way for municipal bans on swimwear for Muslim women, called “burkini bans,” in 2016.

What’s the best way to get teens to cooperate? Take their phone away, the French seem to think.

In December, NPR reported that France plans to ban mobile phones in school for all students 15 and younger, beginning this fall. According to NPR, phones are already banned in the classroom. The new rule would also ban phone use outside of it too, such as on the playground or in the cafeteria. Phones would need to be kept in the student’s backpack at all times, only to be used for educational purposes or in emergency situations.

According to Metro UK, France’s finance minister Bruno Le Maire is looking to pass new regulations that would limit cryptocurrency use and potentially even lead to a ban on bitcoin and its ilk. The regulations would be implemented in an attempt to address “speculation and possible financial manipulation” by cryptocurrency traders.

The ban on hiring family members will affect an estimated one in six ministers and MPs, according to The Local.

Telling someone they “throw like a girl” will soon be a good way to get thrown a fat fine in France.

In a November speech, President Emmanuel Macron announced that using “gender-based insults” will soon be punishable by law. This announcement came as Macron delivered a speech about gender-based violence, which affects at least one in three European women, according to the European Union Agency for Fundamental Rights.

“Hashtag” is just one of more than 5,000 English words that are banned in official French documents, schools, and media outlets in an effort to preserve the French language. In 2013, the government instead suggested French tweeters use the word mot-dièse, which means “sharp word” in English.

Ironically, #mot-diese doesn’t even work on social media because a hashtag can’t include a dash in it.