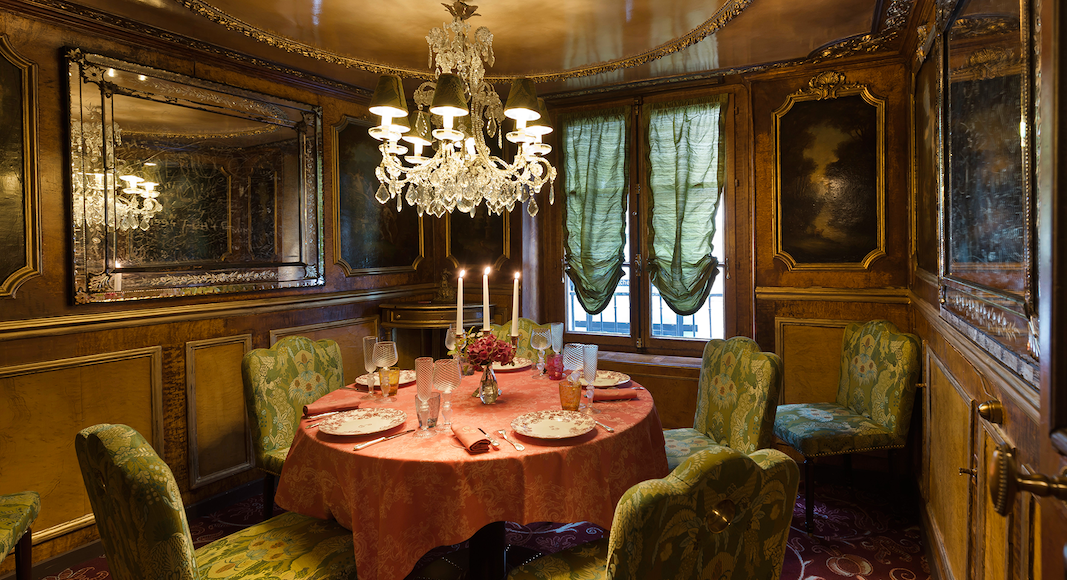 In typical Parisian manner, a good restaurant is often marked by curious history, a bit of luck, and the ultimate charm — the kind of place that seems like where politicians would bring their mistresses.

The Left Bank’s famed Lapérouse, opened in 1766, was once just that, a three-story establishment offering yummy wine and private salons where senators would bring their cocottes during its 18th- and 19th-century heydays (where those supposedly tested out the quality of their diamonds by scratching them on the mirrors). Lapérouse was recently closed for a four-month renovation by French designer Laura Gonzalez, but the establishment is now ready to relive its best days and make new history.

In the 1990s, Lapérouse gained its reputation as a fashion destination, featuring late-nighters like John Galliano, Kate Moss and their whole gang. But before that, the literary scene, including the likes of Émile Zola, Alexandre Dumas, Colette, Ernest Hemingway and Victor Hugo fancied the restaurant as well.

The origins of the restaurant, however, are much less chic, though certainly special nonetheless: a king’s lemonade maker bought the private mansion on 51 Quai des Grands Augustins, across the street from the Seine, to convert it into a wine shop. Offering high-quality wine, his location already became quickly popular by the end of the 18th century. Under the direction Jules Lapérouse, who bought the space in the mid-1800s, that the restaurant reached a new level of culinary excellence, service, and prestige. Paris’s beau monde turned the restaurant’s salons into their own literary salons frequented by regular patrons.

Of the restaurant, Marcel Proust wrote:

“On some days, instead of staying at home, he would have lunch in a nearby restaurant whose good food he had once enjoyed and where he now only went for one of those reasons both mystical and bizarre, which we call ‘romantic’; it is because this restaurant (which still exists) had the same name as the street on which Odette lived: Lapérouse.” (“In Search of Lost Time,” 1913)

We can recognize Lapérouse in endless literary works by Balzac as well.  It is also featured in Woody Allen‘s “Midnight in Paris.” As empires moved on and the Third Republic began, and then the Occupation, the low-ceiling establishment only continued to flourish. The low-ceiling even prompted the expression “se taper la cloche” (to strike one’s bell) since many men hit their top hat with the door’s frame. Through the years, the patrons continued to come. (Rumor has it that Serge Gainsbourg actually met Jane Birkin at Lapérouse, too.) One can only imagine the number of love stories that began, and possibly ended, there at the bar!

The sleeping beauty of a restaurant was in much need of a rest, and the necessary upgrade has revived its regal atmosphere. The restaurant’s murals have been restored to their original quality and the tabletops have been reimagined by Dior Maison creative director, Cordelia de Castellane.

And so, just like that, Lapérouse is ready to welcome, once again, the world of fashion, literature, and all in between.

The restaurant has also partnered with Berluti CEO and LVMH director Antoine Arnault to launch a rollout of affordable Café Lapérouse locations throughout the world, including one in the Hôtel de la Marine in Paris followed by other international locations. Time will show whether these additions will respect the history of the original location or rather focus on a contemporary marketing strategy.

Regardless of what happens at other locations, the one-and-only original Lapérouse in le quartier latin is ready to welcome the nostalgic kind, the new nomads, and all those willing to dwell in its history and enjoy a good French meal (three-starred, nonetheless.) The cherry on top? One of Paris’ best pastry chef’s Christophe Michalak is in charge of the desserts.