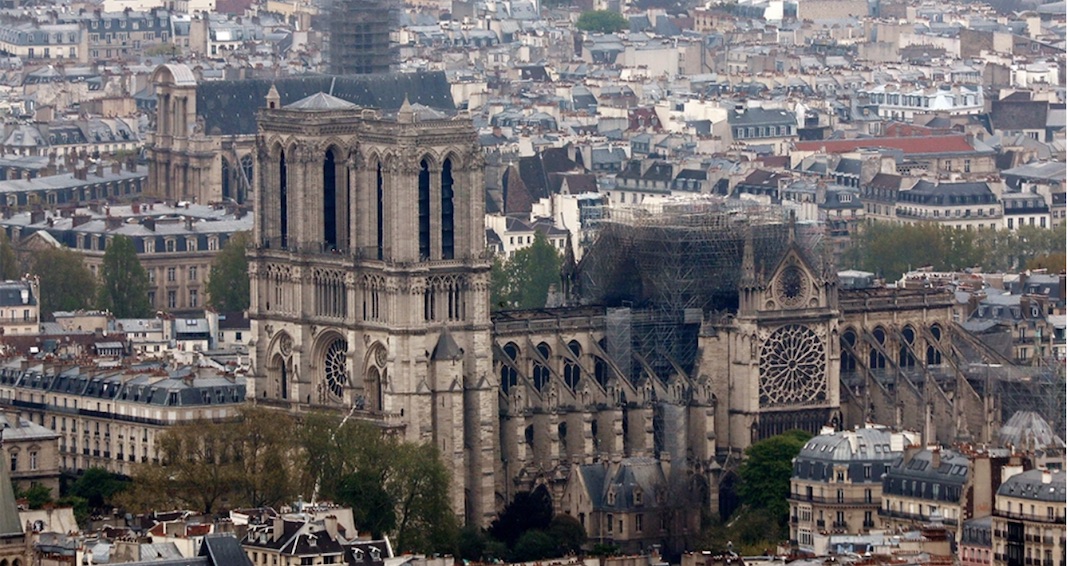 1. The creator was humble

Bishop Maurice de Sully, who started the construction in 1163, was the son of a laborer and a lumberjack. Raised among the monks near Sully, he was sent to Paris to continue his studies, then joined the prestigious Notre-Dame chapter, before being elected bishop by his peers. One day, when his mother came to visit him dressed in fancy clothes, he told her to dress like the peasant woman she truly was.

2. Four churches are below it

The latest archaeological hypotheses estimate that no less than four different religious buildings have succeeded each other below the current cathedral, all built on the same site on Ile de la Cité. There was a 4th-century Early Christian church, a Merovingian basilica, a Carolingian cathedral and a Romanesque church, which was demolished as the current cathedral was built, with the sacred stones sometimes being cut out or used for the foundations.

3. It’s not all right angles

The Notre-Dame choir, located so that it’s in the direction of east in line with the rising sun, does not align perfectly with the central nave, its structure being very slightly offset on the left. According to tradition this is an old custom symbolizing Christ’s collapsed head on the cross.

The oldest statue is the Virgin and Child in Majesty on the tympanum of the St. Anne portal, to the right of the façade, carrying her son on her knees. It’s a masterpiece of Romanesque art, probably dating from the mid-12th century, which belonged to the old cathedral and which was reused by stonemasons on this portal. The statue miraculously survived the French Revolution unharmed.

5. It was a record-setter

When the nave was completed at the end of the 12th century, Notre-Dame de Paris was the largest Christian building in the Western world and remained so throughout the first half of the 13th century, until other cathedrals were built, such as those in Chartres and Reims.

Twenty-one hectares (nearly 52 acres) of oaks were used to create one of the most impressive structures of the 13th century, nicknamed “the forest,” which ultimately was destroyed in the fire. Each beam came from a different tree; 1,300 oaks were felled, some dating back to the 9th century.

7. It hosted some religious tomfoolery

You may be familiar with the Fête des fous romanticized by Victor Hugo (and seen on screen in Disney’s The Hunchback of Notre Dame). In actuality this celebration was held within the church, rather than in the city streets: it was a reversal of power organized by the young clerics, from December 28 to January 6, dates that correspond to the calendar change. The master of the feast sits next to the bishop, leads songs, and parodies the hierarchy. The festivities went as far as dancing, eating on the altar and burning old soap in thuribles (metal censors that hold incense during services). Tolerated, organized, and then suppressed, the festival stopped in the 16th century.

8. It was nearly destroyed by the French — on purpose

During the French Revolution, the building was nothing more than a shadow of itself: treasure looted, statues destroyed, spire collapsed… The French even considering knocking it down and selling the stones! It was not until Victor Hugo’s famous novel in 1831, Notre-Dame de Paris (or The Hunchback of Notre Dame, in English) combined with the newfound appreciation for French heritage, that the project for a major restoration was launched.

9.  The architect is hidden there

Eugène Viollet-le-Duc, the famous architect who restored and embellished the cathedral in the mid-19th century, was represented in the group of apostles, located at the foot of the new spire he had built. He is known as St Thomas, patron saint of architects. His was the only one turned around, as if he were contemplating his work.

10. The most precious relics were held at the top

The central spire, which was destroyed in the fire, at one point housed three priceless relics: a fragment of the crown of Christ (the crown of thorns), a relic of Saint Denis, the first bishop of Paris, and another of Saint Genevieve, patron saint of the capital, whose abbey was for a long time one of the most famous in the city. The crown of thorns survived, and it’s unclear what happened to the relics. According to a New York Times article, the relics of the two patron saints were still kept in the spire at the time of the fire.

This article was originally written in French by Marc Fourny and published on Le Point.