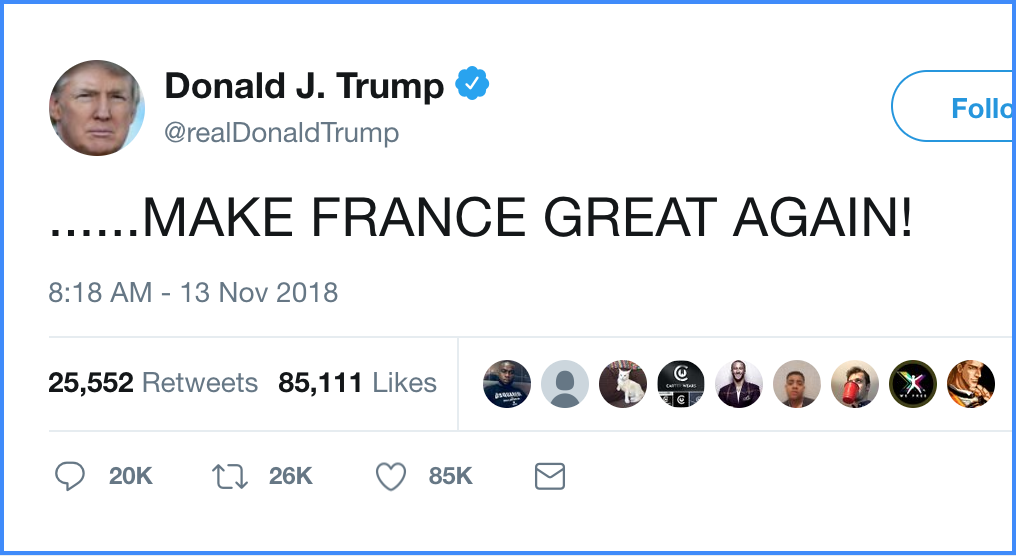 After spending a weekend in France to commemorate the centennial anniversary of the end of World War I, Trump took to Twitter to criticize Macron early Tuesday morning. The American president has undergone several days of criticism for controversial decisions and faux-pas, ranging from firing off a tweet criticizing Macron the moment he touched down on French soil on Friday, to not attending a commemorative ceremony at an American cemetery on Saturday because it was raining.

Emmanuel Macron suggests building its own army to protect Europe against the U.S., China and Russia. But it was Germany in World Wars One & Two - How did that work out for France? They were starting to learn German in Paris before the U.S. came along. Pay for NATO or not!

By saying that the French were starting to learn German during the Nazi Occupation of Paris, Trump is insinuating that the French were surrendering to the Germans before American troops arrive. The tweet is particularly insulting due to its timing — he chose to take a dig at Germany and France’s behavior during World War II just as leaders around the world are finishing commemorations for the anniversary of the end of World War I, one of the most gruesome and bloody conflicts in modern history.

The tweet that followed the first on Monday morning appeared much more trivial, addressing tariffs on American wine going into France. (It’s worth noting that Trump owns several vineyards in the U.S.)

Ten minutes later, Trump hit back again at Macron, first on his low approval rating and then declaring that there is no country more nationalist than France. He then re-appropriated his own nationalist slogan, Make America Great Again, into one for France.

The problem is that Emmanuel suffers from a very low Approval Rating in France, 26%, and an unemployment rate of almost 10%. He was just trying to get onto another subject. By the way, there is no country more Nationalist than France, very proud people-and rightfully so!........

Calling France a nationalist country is a direct response to remarks made by Macron cautioning against nationalism, in an interview with CNN that aired on Sunday, November 11, and again that same day at a ceremony commemorating the end of World War I. It’s hard not to infer that the French president was referencing Trump when he denounced those who embrace nationalism and put “our interests first,” adding that “our demons are resurfacing.”

Patriotism is the exact opposite of nationalism. Nationalism is a betrayal of patriotism. By putting our own interests first, with no regard for others, we erase the very thing that a nation holds dearest, and the thing that keeps it alive: its moral values. https://t.co/w9AltyvMDw

Old demons are rising again. New ideologies are manipulating religions, and history is threatening to repeat its tragedies. Let us vow once more as nations to ensure peace is the utmost priority, above all else, because we know what it cost. https://t.co/skJ6K5SDO1

As political leaders here today on 11 November, we must reassert before our peoples our greatest responsibility, which is to pass on to our children a world that previous generations dreamt of. https://t.co/aeU2BalgwY

According to The Guardian, the office of the French president said it had no comment on the tweets, and that “Macron had made his points about a European army and a European defense very clear to Trump during talks in Paris.”

The American president finished his France-related tirade by addressing the widespread criticism he received for not taking a trip to an American World War I cemetery and memorial in Belleau, about 50 miles northeast of Paris, on Saturday because of the rain.

The White House statement released on Saturday said, “The President and First Lady’s trip to Aisne-Marne American Cemetery and Memorial has been canceled due to scheduling and logistical difficulties caused by the weather.” Trump sent an American delegation to the ceremony in his place, including his chief of staff, retired Marine Corps Gen. John Kelly.

By the way, when the helicopter couldn’t fly to the first cemetery in France because of almost zero visibility, I suggested driving. Secret Service said NO, too far from airport & big Paris shutdown. Speech next day at American Cemetery in pouring rain! Little reported-Fake News!

Meanwhile, despite the rain, other world leaders invited to France for the commemorations all traveled to their own ceremonies near Paris. Canadian Prime Minister Justin Trudeau traveled 118 miles outside the capital to attend a ceremony at a cemetery in Vimy, France. German Chancellor Angela Merkel and Macron both attended a ceremony at the Clairiere of Rethondes in Compiegne memorial, also known as Glade of the Armistice memorial, about 40 miles north of Paris.

Trump received widespread criticism, in particular from American and British politicians. Ben Rhodes, who worked as deputy national security adviser for strategic communications under President Barack Obama, tweeted that the White House’s excuse about the rain didn’t hold up: “I helped plan all of President Obama’s trips for 8 years. There is always a rain option. Always.”

Many on Twitter shared a video of Prime Minister Trudeau at a commemoration ceremony in 2017, saying the rain shouldn’t be considered that much of a discomfort relative to what soldiers in World War I endured.

"As we sit here in the rain, thinking how uncomfortable we must be these minutes as our suits get wet and our hair gets wet and our shoes get wet, I think it's all the more fitting that we remember on that day, in Dieppe, the rain wasn't rain, it was bullets," Justin Trudeau pic.twitter.com/zeqrpceZOI

The French army had less restraint than the French president in responding to Trump’s decision not to attend a ceremony in the rain. On Monday, the official French army twitter account tweeted the following:

The entire weekend began on a sour note, with Trump tweeting a criticism of Macron upon touchdown in France. He was responding  to a comment from Macron that France and Europe would need to strengthen themselves against attacks. Some believe Trump’s words were an important rebuke of Macron’s words, while others believe that Trump had actually conflated the French presidents expressed desire to strengthen Europe’s military forces — which is something Trump himself has voiced a desire for — and his expressed intention to better protect France from cyber attacks from Russia, China, and the United States.

President Macron of France has just suggested that Europe build its own military in order to protect itself from the U.S., China and Russia. Very insulting, but perhaps Europe should first pay its fair share of NATO, which the U.S. subsidizes greatly!

The two presidents have long had a tenuous relationship, often wavering between being each others’ friend and critic (between bromance and frenemies, if we may). Macron started a Make Our Planet Great Again website and rebuked Trump in front of the American congress, and Trump regularly declares that Paris hasn’t been the same since the November 2015 terrorist attacks.