One Hundred Years After World War One, France is Committed to Honoring the Fallen

“Hell cannot be so terrible as this. Humanity is mad; it must be mad to do what it is doing. An artery of French blood was spilt on February 21st and it flows incessantly in large spurts.” (Anonymous French Soldier)

To understand the horrors of World War One (WWI), there is no greater teacher than the ominous first-person accounts by the soldiers who endured the gruesome war. The battle of Verdun alone took the lives of 360,000 French soldats. As we near Armistice Day on November 11th, 2018, a day that ended what the British author H.G wells would title his book in 1914, “The War That Will End War,” France remembers and honors the 1.4 million human beings who perished during The Great War with 718 commemorative events, and 4,000 more projects received the official “Centenaire” label.

When we look at the colossal amount of French lives lost in La Grande Guerre — half of the French men born in 1894, age 20 in 1914, were gone by the war’s end in 1918 — it’s not surprising to learn that the French government and NGOs alike have invested large amounts of time and money into this year’s World War One Centennial events. Hundreds of honorary celebrations, expositions, and spectacles have either taken place or are scheduled for a later date. On Armistice Day, there will be over fifty events across the country. All the major battlefields including Verdun and La Somme will hold commemorations for the fallen. Bells of peace will chime throughout La France as church services are held, paying homage to the men, women, and children who passed away.

While the Centennial events in France primarily salute their own, they do not fall short in paying respect to the Allies who fought side by side with them, including Americans. In the United States, four million American families sent their sons and daughters to serve in The Great War. 116,516 American soldiers died in combat or from disease. 350,00 African Americans served in WWI, and, for the first time, women joined the ranks of the American armed forces. Currently, at Le musée de La Grande Guerre in the town of Meaux, just thirty minutes outside of Paris, you can view an excellent exhibition called, “Wake Up America.” The exhibition features rare posters used by the U.S. government as propaganda to mobilize the population and join the war efforts.

The Harlem Hell Fighters, the 369th African American regiment in WWI, fought alongside the French as equals. The Hell Fighters, who never lost a man to the enemy, shook up the music scene in France with their ragtime rhythms and swinging numbers. They aided in the country’s introduction to jazz, and were a lasting musical influence well into France’s Les Années Folles. The WWI Centennial celebrations in France have already held numerous jazz concerts in Nantes and throughout the country, paying homage to these extraordinary soldiers, many of whom were also musicians. One of many upcoming concerts is on October 27 at the Festival Jazz Amarinois.

War is often told and recounted through the lens and words of the male experience. Women’s voices are muted or forgotten altogether. From 2014 to 2018, Les Mission Centenaire en La France has held nearly 400 events about women’s involvement in WWI. French women played a critical role during The Great War when they were forced to take on the roles of their husbands, brothers, and sons, who left to fight on the Western Front. While millions of femmes were already in the workforce before WWI, the conflict brought new economic opportunities for them. Women worked for the military as drivers, telephone operators, and office workers. The women hired to work in factories — les munitionettes — endured brutal conditions while they worked with toxic chemicals, deadly machinery, and explosives. The inclusion of women’s contributions to the war efforts in France’s Centennial line-up is a good starting point in having these unsung heroes venerated. At Le musée de La Grande Guerre, there’s a compelling exposition dedicated to the women who served during The Great War. 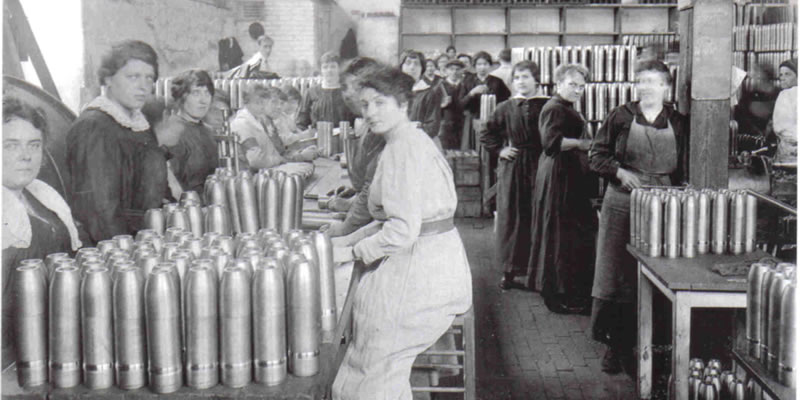 At the 11th hour of the 11th day of the 11th month in 1918, World War I came to an end.  An armistice between the Allies and Germany, at long last, called for a ceasefire, which officially concluded with the signing of the Treaty of Versailles on June 28, 1919. In January 1919, nearly thirty nations participated in the Paris Peace Conference. While complicated with individual country’s demands, on a global scale, the goal was simple and clear: never again to re-live the horrors of a World War.

One hundred years later, France will hold the Paris Peace Forum from November 11th to the 13th. Conceived as a response to growing tensions in the contemporary world, this global platform for governance projects is based on the conviction that, “lasting peace can only be achieved through transnational cooperation”. (Read more about the Paris Peace Forum and how you can get involved here.)

To take part in the World War One Centennial celebrations in France, visit one of the many battlefields, attend a church observance on November 11th, explore The Great War expositions at one of the military museums, or commemorate with live music, theatre, and dance. Additionally, the national French television channel, France 2, will air the exceptional WWI documentary “Apocalypse, la Première Guerre mondiale” on November 11th. With nearly 800 events taking place this year in France for the World War One Centennial commemorations, the French government, NGOs and affiliated organizations alike are serious and committed to honoring the 1.4 million French who lost their lives in The Great War, as well as their Allied sisters and brothers.

France has put precedence on continuing the dialogue about the pursuit of global peace by holding the Paris Peace Forum again, one hundred years after the first. As French president Emmanuel Macron expressed in a speech about the Paris Peace Forum, la paix is in danger. As we commemorate this year and remember the horrors brought on by WWI, eventually leading to World War II, France will be initiating a global conversation where peace is at the forefront, with the hope that World Wars of any kind will never happen again.