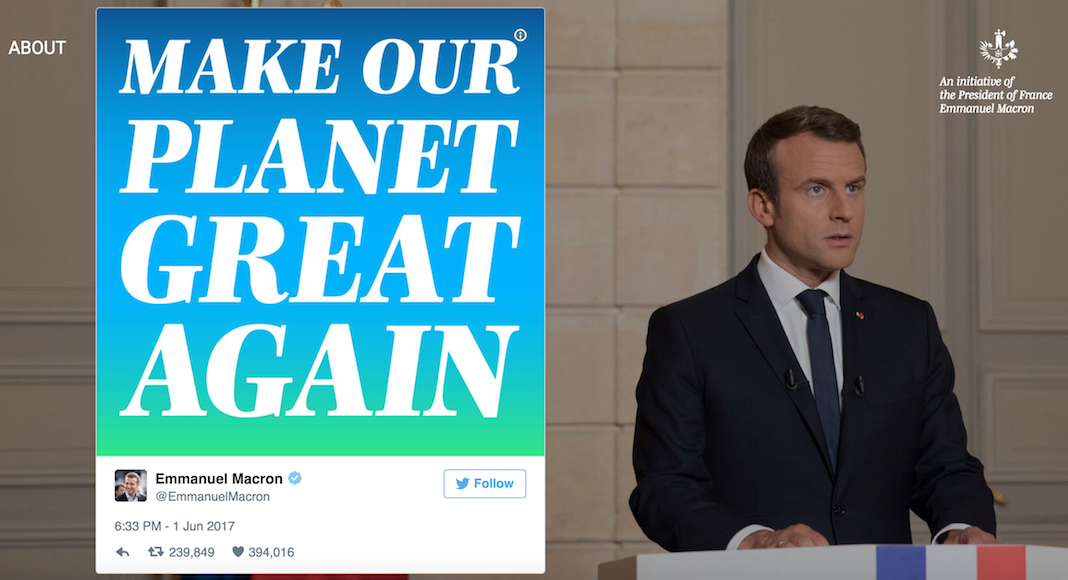 Though there’s no actual war between France and the USA on the horizon (thank god), there’s definitely going to be a Twitter war.

On Thursday, French President Emmanuel Macron launched the website “Make Our Planet Great Again” as a direct response to American President Donald Trump’s decision to leave the Paris Climate Accords. The name of the site is a clever re-appropriation of Trump’s own catchphrase, “Make America Great Again.”

The website highlights the importance of climate change, the Paris Climate Accords, and what the climate accords are trying to do. Language used on the site and the framing of the issues clearly intends to put France at the forefront of fight against climate change: “France has always led fights for human rights. Today, more than ever, we are determined to lead (and win!) this battle on climate change.”

At the bottom of the site is a large green bar “I want to make our planet great again.” If you click on it, after several logistical and opinion-based questions, the words, “Your new homeland” appear, with a message detailing why you should come to France, and a button that says, “I’m coming to France.”

Clicking the button does not (to the dismay of many) immediately transport you to France. It takes you to another page with information about how France intends to place those interested in coming to France to fight climate change, and what France is doing as a nation. There’s a contact form to fill out if you want to be reached about going to France. 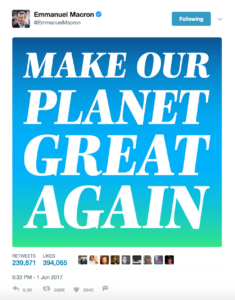 Macron has already invited American scientists, engineers, and responsible citizens to come fight climate change in France twice before. Several days ago, Macron’s team in the Elysée Palace released an edited video by the White House, originally about why leaving the climate accords was a good idea. The updated video declared that it was a bad idea, inserting facts about job creation and the environment.

Aware that not everyone can come to France, Macron offers a simple, sure-to-poke-the-sleeping-Trump, Twitter-based alternative:

“Our planet is about to be great again.
You want to be part of this story.
So share yours.
Tweet #MakeOutPlanetGreatAgain”