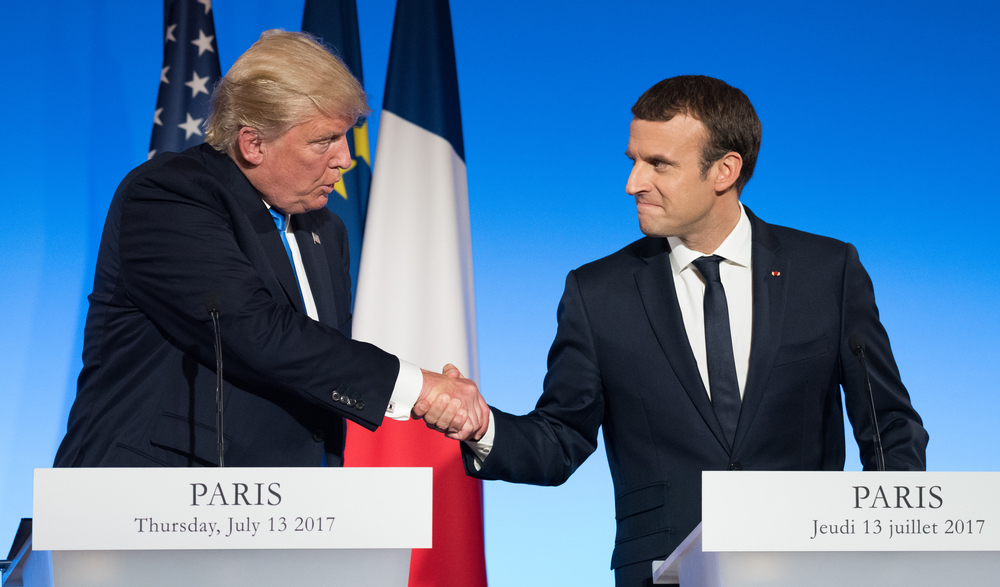 The Trump-Macron Bromance Has a Lot of Hand-holding

There’s been a running joke for a while that French president Emmanuel Macron has a bromance with Donald Trump. It began shortly after the two shared a testosterone-fueled six-second handshake, when Macron invited Trump to France for Bastille Day in July. Ever since then, Trump has been singing the French president’s praises.

Now, during the first official state visit of Trump’s presidency, the bromance is on full display.

I've seen Michael Bay movies that have less action than this handshake pic.twitter.com/hM0OIliwMo

Those who benefit the most from this bromance are late-night American talk show hosts, who are loving it.

Jimmy Kimmel featured a clip of Trump and Macron doing the typical French double-kiss, and then Trump going in for third kiss. “He gave him the full Stormy Daniels there,” said Kimmel.

The two presidents did share a very strange handshake that turned from a normal handshake into one of those arm-wrestling positioned handshakes and a man-hug, most likely also due to a desire to out-do each other, as a CNN journalist explains.

Jimmy Fallon focused on state dinner etiquette, and how Trump’s would be less than passible. “The main course was rack of lamb. But after Trump grabbed the rack, his lawyer had to pay it $130,000,” teased Fallon.

From the same interaction where Trump triple-kissed Macron, Fallon pointed out a weird back-of-the-hand-in-the-palm handshake. “Can anyone in the White House look up how to handshake on YouTube?”

When Stephen Colbert introduced Macron, he pointed out the president’s youth, referring to him as “French president and home-wrecking masseur.”

Colbert cracked jokes about the moment when Trump flicked something off of Macron’s coat jacket that he said was a bit of dandruff. “Macron is still standing next to you smiling after hanging out with you for two days. That’s not dandruff, that’s cocaine,” exclaimed Colbert.

Trevor Noah especially enjoyed an instance of Trump leading Macron away from the press by the hand.

The Daily Show went as far as to make a short black and white film called, “L’Affaire des Mains” (begins at 6:15 in the video).

And while The Washington Post is not a late-night show, the elevator music behind their compilation video makes this footage a joy to watch.