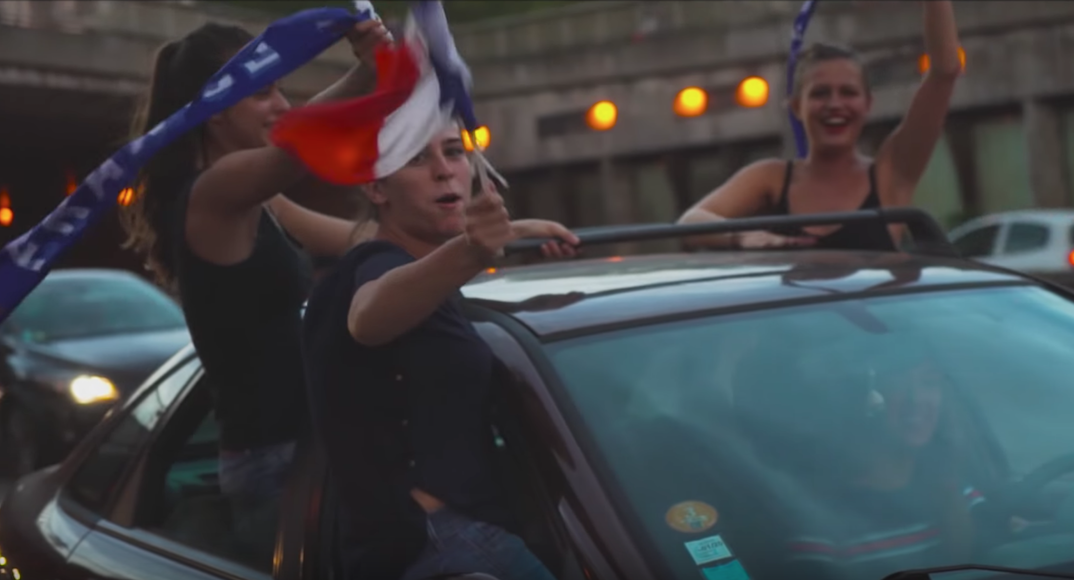 There’s the top 10 songs in France according to Billboard and the top 100 according to Spotify… and then there’s the actual top 10 songs of the summer. The ones that get played the most on the radio, in clubs, in your friend’s car on the way to the beach, on repeat on your iPhone until you know all the words by heart. Here are the 10 songs of France’s summer that you should’ve already been listening to.

Laced with footage of Les Bleus’ victory tour, French citizens celebrating in the streets, and VEGEDREAM riding around town, this song is one big ode to France’s World Cup win. Vegedream is one of Les Bleus’ favorite artists, and, yes, we also read his name as “veggie-dream.””Ramenez la coupe à la maison” means “bring the Cup home,” and it’s repeated throughout the chorus between chants of “allez les bleus, allez.” All 23 members of the French World Cup squad get shout-outs in the verses, plus coach Didier Deschamps.

Just like Frenchly told you, French female rappers are on the rise. This song features rapper Aya Nakamura telling off an old fleeting love interest for trash-talking her behind her back. The song has underlying African rhythms mixed with hip-hop sounds that take it from an anthem for dismissing scrubs from your life to a danceable hit.

A song seemingly without a genre — rapping over an acoustic guitar, a vaguely Josh-Groban-sounding chorus over some techno beats — is indeed a song of the summer. Musical great Maître GIMS is back again with a moody song about how people are boxed into being one thing and can’t be anything else, and how he, Maître GIMS, is quite a complicated man.

What begins as a sort of operatic Italian song quickly turns into a dark pop-electro song with an almost Yiddish vibe (almost). NAESTRO sings the operatic parts while other rappers and musicians fill in the rest. All together, this song about the pain of losing a woman, and begging her to come back to you, is perfect for singing loudly and over-dramatically to/at your friends.

Surprise! Did you know that David Guetta is French? The music producer worked with Dutch electronic-dance duo Showtek to create this house hit about love and the dancehall feverish demand to prove it.

Well what do you know, more French music in English. French DJ Kungs and DJ GOLDN teamed up to create this dance hit about the timeless subject of being there for the girl you love. It’s all in English, so Americans will feel right at home singing this hit.

Full of African beats as is becoming typical of much modern French rap, “Pourquoi Chérie,” meaning “why darling” is, depending on your perspective, a sweet song telling a girlfriend you can work through the issues in your relationship or a song that gaslights women. Either way, it’s an earworm that’ll make you want to get up and dance.

KeBlack raps over African drum rhythms about the woes of a man in a relationship with a woman who wants to move forward in the relationship and get married while he is “complètement sonné” (essentially, taking it slow, stalling, chilled out, indifferent). The music video is absolutely worth a watch if only to see what happens at the end when the girlfriend asks KeBLack “are you going to marry me or die?”

Definitely the best music video of the hits on the list. Never has soccer looked as fun as it does in “Ofondéfilé ( world cup 2018 ).” The cymbals, African drums (see a pattern yet?), and synthesizer all together will make you want to jump up and down and shake as much of your body that you can at once. Just like Charles V. says, “let me dance / it’s gonna heat up.”

The title of this slow jam, “91’s” is a callback to where duo PNL hail from — the French suburb of Essonne, postal code 91. The entire song is about their rise to fame in the industry, the lyrics a strange mix of bitterness, bragging, and rebellion. PNL has not officially put the song on YouTube, so if this video gets taken down, listen to “91’s” on Spotify here.