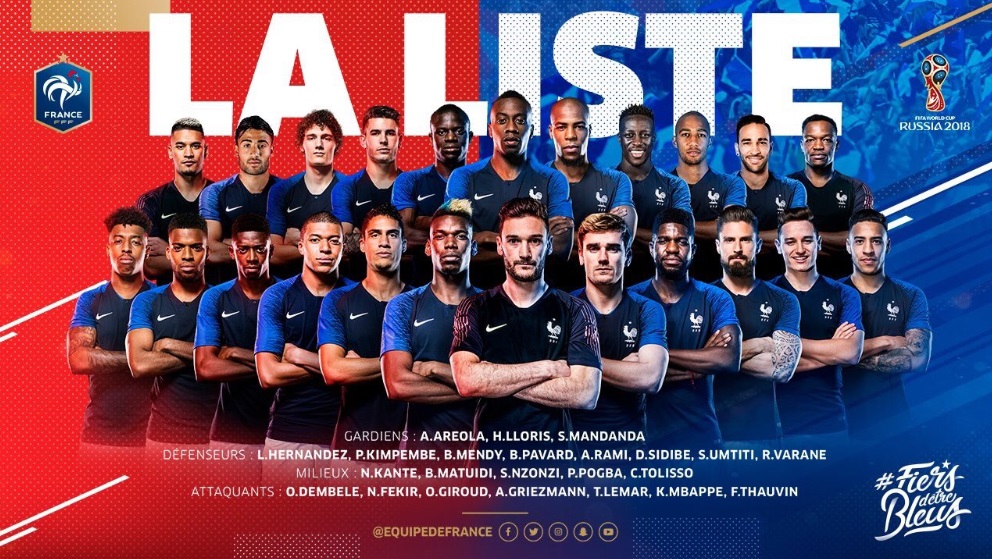 You may be able to name off every single player on France’s World Cup team headed for Russia this summer, but do you know anything about them? Can you spar with a football fan about them, or at least parrot a few factoids? Let us enlighten you…

Deschamps will be seeking his second World Cup title; he led the national team to win the 1998 World Cup (he also won the Champions League—twice). He’s been leading the French team since 2012, helping them reach the quarter-finals of World Cup 2014 and the finals of the Euro Cup 2016. His critics say that his coaching style is boring: he has a bunch of technical players, but they don’t play a technical game.

Steve Mandanda (Marseille)
Mandanda has played 10 seasons for Marseille and has been in three Euro Cups and one World Cup. Living in Lloris’s shadow, he’s always the sub for goalie even though he’s basically at the same level of play as Lloris. Most recently, he allowed three goals in the Liga 1 championship game which gave opponent Atletico Madrid the title.

Alphonse Areola (Paris Saint-Germain)
Another replacement for Lloris, Areola’s great season with Ligue 1-winning PSG would indicate that he’s worthy of going in the game. Though he’s had streaks of success and of failure, he’s overall been getting better and better.
Not fun fact: Legendary goalie Gianluigi Buffon might be joining PSG, which means Areola would be benched. Depending on the news about Buffon, Areola could be in a good or bad mood during matches.

Djibril Sidibe (Monaco)
Right-back defender Sidibe is one of the best players in his position, and he was expected to play all World Cup games… but a knee injury on suffered on April 15 could affect that. He just returned to training on May 8 after refusing the recommended surgery, which certainly would have kept him off the field.

Benjamin Pavard (Stuttgart)
At 22, this center-back is considered one of the best players in the German league Bundesliga, and one of the most highly-rated in Europe. Though he may not have turned heads a year ago, he’s played the full 90 minutes in all of Stuttgart’s games this year. Coach Deschamps chose him for the team because Pavard can play right-back and center-back.

Raphael Varane (Real Madrid)
Center-back Varane is so talented, he’s been called the best defender in the world by several ex-players and managers. He’s the youngest defender to ever win three Champions League titles. He’ll definitely be starting, most likely playing with Umtiti since he (Varane) right-footed and Umtiti is left-footed, but he’ll need to be more aggressive if he really wants to make his mark at the Cup.

Samuel Umtiti (Barcelona)
Umtiti has been an asset to Barcelona. Their center-back, he’s always a serious player who’s committed to getting the job done. In the 25 games he’s played for Barcelona this season, he’s racked up seven yellow cards. He’ll definitely play, most likely using his left foot to complement Varane’s right.

Presnel Kimpembe (Paris Saint-Germain)
A 22-year-old left-footed center-back, Kimpembe’s presence at the World Cup will be just his second international match. He started playing for PSG four years ago and only became a game-regular this season. He’s young and looks it but plays hard like an experienced player. His style is aggressive, earning him 10 yellow cards and two red cards in 28 games.
Fun fact: He became widely known after playing really well in a Champions League game against Lionel Messi.

Adil Rami (Marseille)
An imposing center-back, Rami has been making big money moves playing for teams in Italy, Spain, and France for over a decade. It was uncertain if he’d make the World Cup squad or not, since he’s good but not at the same level of the other defenders that are World Cup-good. He’s right-footed, which will work well with left-footed center-backs Umtiti and Kimpembe.

Benjamin Mendy (Manchester City)
Playing back-left, Mendy wasn’t expected to make the roster for the Cup. Out of the game with an injury from basically September to May, his performance ability is a big question mark.

Lucas Hernandez (Atletico Madrid)
Age 22, Hernandez was chosen for the team because he can play left-back and center-back. Even though he’s played for the French national team twice this year, he’s overall a question mark in the minds of many fans.

Paul Pogba (Manchester United)
After a season spent on the field and on the bench with Manchester United, midfielder Pogba is not a certain bet. He’s one of the most talented players with good technique, speed, and the ability to shoot, but he never seems to be giving his best performance. However, he’s said recently he wants to put in full effort and really be the leader of the Cup team.

Blaise Matuidi (Juventus)
Every team needs a midfielder with passion and energy, and Matuidi fits the bill perfectly. He’s got energy, endless energy. There’s a joke that he has four or five lungs because when everyone else is tired, he’s still running. He makes up for lack of technique with strategic aggression.

Corentin Tolisso (Bayern Munich)
It’s unlikely this midfielder will start since he’s not much a star player, but Tolisso more than makes up for that by being an all-around good player (“un joueur complet”).

N’Golo Kante (Chelsea)
With three seasons for Chelsea under his belt, midfielder Kante will no doubt get some serious play time during the Cup. He’s consistent, he’s tireless, and he’s versatile whether it’s protecting defense of pushing forward. This past season he improved immensely in his passing and ball control.

Steven Nzonzi (Sevilla)
Midfielder Nzonzi is a surprise on the Cup team. (Adrian Rabiot was expected to have his spot.) At a press conference, the coach said Nzonzi was nothing special but he’s reliable, hard-working, and tall (6’5”). (FYI, a really tall player is called “un joueur de l’onde,” or a shadow player.)

Kylian Mbappe (Paris Saint-Germain)
At just 19, Mbappe is a star for PSG. He’s faster than everyone and very technical—he’s the new Zidane. He made a 180€ million move from Monaco to PSG putting a lot of pressure on him from the get-go and wow has he delivered, scoring 17 times and raking in 13 assists in just 35 appearances. He’s almost certain to be a starting forward in the Cup. If you remember anyone, remember him.

Olivier Giroud (Chelsea)
A forward for Chelsea, Olivier Giroud is one of the best, even though the fans may not always agree. He gets criticized a lot because he’s tall and muscley, but slow. He’s not technical at all, yet he scores (especially in the FA Cup—21 goals for 26 Cup appearances), because he’s got a strong mind for the game. He’s the only true center-forward so he’s likely to start.
Fun fact: He’s the best scorer that plays for France on the current roster.

Antoine Griezmann (Atletico Madrid)
He just beat Marseille with his team in the Europa League championship, but France can’t stay mad: they need Griezmann. From 2009 (when he started at age 18) to 2014, he scored 46 goals in 180 appearances. At Euro Cup 2016, he was voted the best player in the tournament, and was 3rd place for the Bal’Or that same year. With 19 goals in 30 La Liga games and experience as a main striker, attacking midfielder, and a winger, Griezmann is one to count on and performance worth watching.
Fun fact: During the Euro Cup 2016, there was a hashtag solely dedicated to his butt #LesFessesdeGriezmann. (And no, he’s not single.)
Fun fact to parrot but not understand: He’s left-footed but can finish with either foot, both inside and outside the box.

45% - Antoine Griezmann has been directly involved in 45% of the 93 goals (29 goals, 13 assists) that Atlético Madrid have scored in all competitions this season. Essential. pic.twitter.com/JY5X7isZfd

Ousmane Dembele (Barcelona)
Forward Dembele is very talented. His style is technical with lots of different moves that he’s constantly attempting to execute. No one has doubts that Dembele will start and is meant to be on the team.

Florian Thauvin (Marseille)
A forward, Thauvin is amazing for the level he’s currently playing at—a national level—but fans are concerned if he can handle the higher level of international play.
Fun fact: Thauvin has scored 22 of Marseille’s 80 goals this season

Thomas Lemar (Monaco)
Last year, forward Lemar was supposed to be transferred to Liverpool for around 100€ million, but Monaco wouldn’t let him go. The disappointment of staying with Monaco caused Lemar to lose his mojo, but he’s played well with the French team in the past so it’s not too worrisome. He’s the only specialist left-winger among the forwards.

Nabil Fekir (Lyon)
Forward Fekir is similar to Thauvin in that he’s amazing for his level of play (national) but fans are unsure if he can handle the skill and pressure of an international game. A captain and leader on the Lyon team, Fekir is really technical and good shooter with a great left foot. It was a bit of surprise he was on the team, but the choice seems good.

**Adrien Rabiot, bitter he was not selected for the starting 23, has rejected the offer to be on the reserve team.