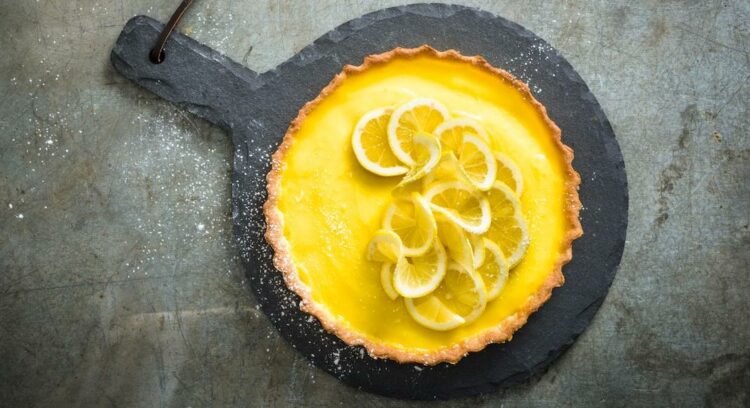 French desserts go in and out of style as often as crop tops, Kanye, and ketamine. Macarons, kouign-amanns, and eclairs filled with everything from matcha to passionfruit have all had their time in the spotlight. But there’s something to be said for the mainstays of French pastry, the classics that satisfy again and again because they’re so fundamental that every pastry chef in town can make one with their hands tied behind their back.

With holidays and winter approaching (and citrus season in the wings), it’s time we turn our attention to the tarte au citron. This simple lemon curd tart, often topped with toasted meringue, is always the life of the party. She’s bright, she’s zingy, and she has a Ted Lasso-ian ability to turn any and all frowns upside down. And she’s easy to find, if you know where to look.

Are we surprised to find Dominique Ansel kicking off this list? Of course not. The Soho staple serves a luscious Lemon & Sea Salt Meringue Tart, with homemade lemon curd, lemon confit, and fresh lime zest topped with light and airy sea salt French meringue, in a vanilla sablé tart shell.

Salon Sucré in the Lower East Side is the project of chef Simon Herfray, a combination French dessert bar and patisserie where pastries are paired with wine for an overall decadent experience. (The Salon’s offshoot, Atelier Sucré, recently made our list of best pastry classes in NYC.) Their lemon tart is a juicy combination of lemon curd, pâte sablée, and lemon mousse, and is recommended to be paired with Domaine de la Colline (Chinon) or Château Potensac (Bordeaux).

Though Eclair Bakery is known for its eclairs, Stéphane Pourrez’s Midtown bakery doesn’t skimp out on the other French goodies. Their Lemon Meringue Tart is a delight with a light lemon cream and a sweet crust, perfect for a mid-afternoon pick-me-up on the days you’re forced to go into the office.

The bistro-meets-steakhouse in the Ludlow Hotel, Dirty French has been serving French classics to the LES crowd since 2014. Among their offerings is a Citrus Tart made with preserved lemon, almonds, and toasted meringue, with flakes of salt to brighten and enhance the citrus flavors on this multi-dimensional dessert.

Patisserie Chanson brings European coffee shop vibes and world class pastry quality to the Flatiron District. Their Lemon Tart, topped with seasonal fruits, is a welcome rejuvenator after an afternoon of shopping around Madison Square Park. (For a similar flavor profile, they also have a Lemon Yuzu Eclair with a meringue garnish.)

Not all tartes au citron need necessarily be made from citron. At Bien Cuit’s several locations, a Calamansi Meringue Tart uses a rare type of lime from the Philippines to make a creamy, citrusy filling that tastes like a mixture of lemon, lime, and orange.

Charlotte Patisserie’s two locations, in Greenpoint and Cobbe Hill, serve local charm with overseas delicacies to either end of Brooklyn. Go for brunch on a budget, and have a slice of Lemon Meringue Tart with an Aperol Spritz on the side.

For something a little unorthodox, try the dessert bar Patisserie Tomoko in Williamsburg, which combines French and Japanese baking influences to create unique desserts. Exhibit A, their Yuzu Mousse with a cookie base—though not exactly a traditional tarte au citron, this light and airy mousse flavored with yuzu is a delightful riff on the classic.

Bed-Stuy might not be your first thought when it comes to finding a traditional French bakery, but Bonjour Brooklyn Bakery has ventured into the depths of the borough to bring exquisite French patisserie to all. Their individually portioned lemon tarts in high, thick pastry crusts are topped with gorgeous toasted bits of meringue.