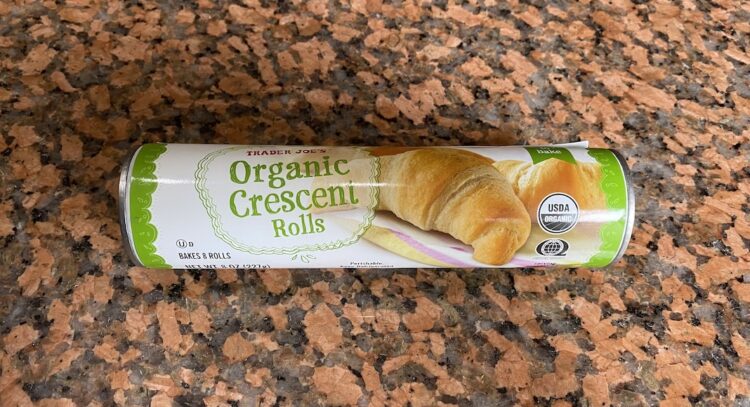 At the nameless boulangerie I lived next to for a blessed year in the 11th arrondissement, I could buy what I believed then to be the best croissant in Paris for 90 centimes. But now that I’m back in Brooklyn, it’s harder to come by a good croissant that won’t break my budget, or punish my feet by forcing me to walk for an hour and then spend another hour in line. So I wanted to see if I could recreate some of my favorite French viennoiseries using store-bought dough for a quick and easy breakfast to make for family over the holidays.

For my first batch, I decided to go basic, with Pillsbury Crescent Rolls. But the texture was off—too doughy, expanding and sticking in my mouth like the Pillsbury Doughboy was trying to choke me out as atonement for the horrors I had inflicted on the ideals of French cuisine.

Next, I tried Trader Joe’s Crescent Rolls, which were marginally better than the Pillsbury ones, but still not great.

Finally, I switched to store-bought puff pastry. The results were noticeably improved, and the closest, finally, that I could get to real croissants using a pre-made, readily-available product.

Making a normal croissant with puff pastry is as easy as (buying a grocery store) cake. Preheat the oven to the suggested heat (the brand I used, Pepperidge Farm, called for 400°) and set the puff pastry on the counter to thaw. If it’s folded, the top fold will thaw first, so be sure to unfold it after about ten minutes so the dough reaches an even texture. Once thawed (but not squishy), slice the puff pastry into evenly-sized triangles. Roll these up into little croissant shapes, and space them evenly on a sheet pan covered in parchment paper. Bake as directed, approximately 15 minutes, or until golden.

Note: You can make a very un-French croissant by adding a bit of seasoning to your triangles before rolling them up. I would recommend the Everything But the Bagel seasoning from Trader Joe’s, or a bit of za’atar (inspired by the fabulous za’atar croissants at Nick + Sons Bakery in Brooklyn).

A classic of savory viennoiserie, the jambon fromage croissant is an ideal breakfast, light lunch, or afternoon snack. You’ll need prosciutto and shredded cheese. The most traditional would be emmental (Swiss cheese) or gruyère, but I used a combination of both for mine. Cut your puff pastry into triangles, and before you roll them, lay a single strip of prosciutto on top, and sprinkle some cheese. Roll up and bake as directed. They might not look that pretty, but they taste good and will quickly fill up the cousins, aunts and uncles on their trips back and forth to the coffee pot.

The absolute best way to get pain au chocolat at home is to get a box of Trader Joe’s frozen Chocolate Croissants, which need to proof overnight before you bake them in the morning. However, not everyone lives close to a TJ’s, so you can make a puff pastry version without much fuss. For this recipe, you’ll need to cut your puff pastry into a rectangle, not a triangle. Get some baking chocolate and cut out two long, thin strips of chocolate, equivalent in length to the width of your puff pastry. Lay the first strip of chocolate along the edge of the puff pastry, and roll the dough once to cover it. Lay the second strip of chocolate against this first roll, and keep rolling until you’re out of dough. Place your chocolate croissant on the parchment paper with the final flap tucked firmly underneath, and bake as directed. Again, this may look more like a roll than a delicate croissant, but, trust me, no one cares over a holiday weekend–they just want food and, more importantly, the conversation.

A chausson aux pommes is like an apple turnover, but instead of using apples, you use applesauce. The name means “apple slipper,” because, apparently, French people put applesauce in their slippers? Who knows. Either way, you’re going to cut your puff pastry into a long oval and dollop about three tablespoons of applesauce on one side. Fold the other half over it and seal shut, scoring the edges. Bake as directed. Don’t worry if some of the applesauce leaks out, because it will caramelize the edges as they rise and seal shut.

The Kouign-Amann was a little-known sweet from the Brittany region of France until Dominique Ansel rebranded it as the DKA and converted all of New York into its new fan base. It’s essentially croissant dough that has been folded and covered in sugar and baked in a muffin tin to create a hard, caramelized bottom. To make this with pastry dough, cut your puff pastry into squares. Fold the corners of the squares to meet in the middle, like you’re making a paper fortune teller. Sprinkle your squares generously on both sides with sugar. Butter a muffin tin. Tuck each square into its own muffin compartment, and bake as directed.

An alternative recipe involves Trader Joe’s frozen Mini Croissants. These are, in my opinion, the best croissants you can make at home, and require no rising time. I actually attempted to use these to make ham and cheese croissants, but they come frozen and pre-rolled, and waiting for them to thaw enough to unroll them and add the ham and cheese inevitably affected the texture of the end result. But! They can be used to make wonderful Kouign-Amann. They won’t look as good as the puff pastry version, but they will taste better. Butter your muffin tin, and sprinkle sugar in the bottom of each muffin compartment. Slice the mini croissants into smaller chunks, and arrange them in the muffin tins close together. Sprinkle with sugar. Bake as directed. (You can also cut the mini croissants in half if using a mini muffin tray, like I did. They will look less like a classic Kouign-Amann, but they’ll taste great nonetheless.)