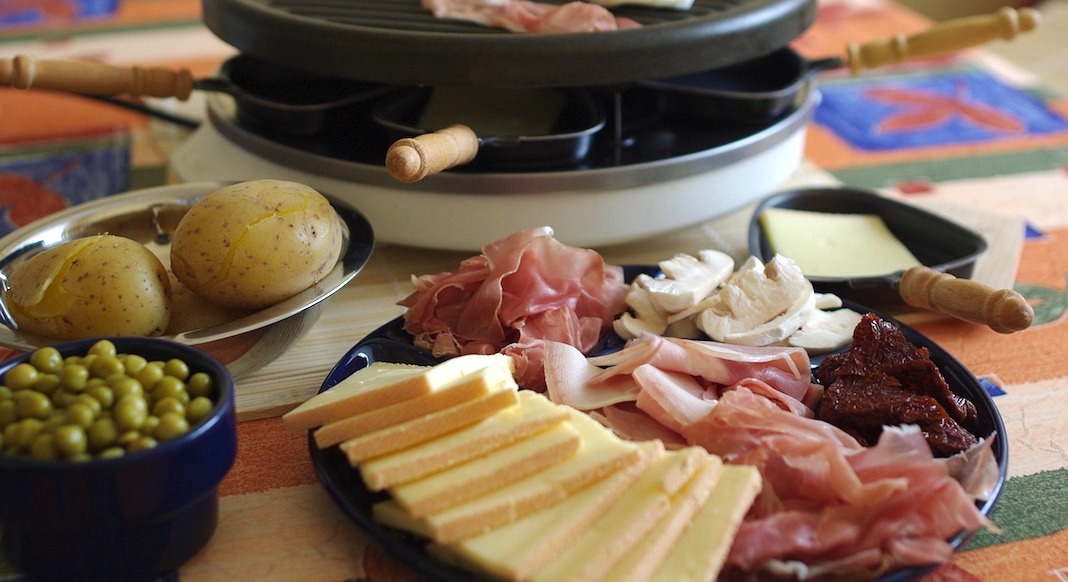 Where to Find Raclette in NYC

Like most trendy food, raclette began as a simple peasant tradition in the mountains somewhere. The Alps, specifically, where shepherds would huddle around a warm fire and eat boiled potatoes and cornichons covered in melted cheese. The wheel of cow’s milk cheese would be melted over the fire and scraped over the food, which is where you get the name for raclette cheese, from the French word racler, meaning “to scrape.” Now the Swiss dish is made all around the world and eaten in just about every format you can think of. So if you’re a chilly New Yorker looking to put on a few insulating pounds before hibernation, this is where you can find the best of the best in New York City. (Or, if you want to attend the largest raclette party in the U.S., hosted by French Morning in New York City, you can check out that event here.)

The upscale Midtown Swiss restaurant Mont Blanc 52 takes the peasant food of raclette and turns it into a swanky experience, made with boiled potatoes, veg, and thinly sliced air-dried meat called viande des grisons. You can order it for two people for $54, three for $81, or five at a whopping $135. — 344 W 52nd St, New York, NY 10019

PMF, a cozy little bistro in Alphabet City with a comprehensive wine bar and a relaxed vibe that is truly French, serves all of the Gallic classics. But instead of the popular “Taco Tuesdays” you’ll find at your local dive, PMF has Tuesday Raclette, with an individual special for $24.95 and a group deal that comes with two complimentary bottles of wine if you bring more than four people. Also try their raclette burger, loaded up with the dish’s namesake cheese. — 103 Avenue B, New York, NY 10009

It’s the number one New York spot to get this Swiss specialty. Raclette, in the East Village, serves five different types of the dish. The Savoyarde, named for the region in which raclette was created, is the most basic option, and only $14. But you can also spring for the Mediterranean, Parisian, Swiss, and New York varieties. But don’t try to just pop in at a moment’s notice–the bistro is small and very popular, and you’ll be waiting a long time if you forget to make a reservation beforehand. — 511 E 12th St, New York, NY 10009

For something a little non-traditional, try a raclette sandwich at the Baked Cheese Haus in Bryant Park, with delicious options like the Alpine Brat or Jambon Cru for as little as $11. Pair it with their Hot Apple Cider Chai for a festive twist. Founded in — where else —Wisconsin, these clever cheeseheads are known for their Holiday Market pop-ups everywhere from Chicago’s Christkindlmarket to Philadelphia’s Christmas Village in Love Park. — 900 6th Ave, New York, NY 10118

Though you won’t find it on their website, the charming Swiss restaurant Café Select serves a sausage-heavy version of the dish in their hidden back room through the kitchen, known as the Après-ski Fondue Chalet. You can have it as an appetizer, order “Raclette à Discretion,” or get a personal grill installed in your table for a 4-person, build-your-own raclette experience. — 212 Lafayette St., New York, NY 10012

Sunday In Brooklyn is the kind of marble-table, high-beamed brunch spot that defines Williamsburg in its quest to build the most Instagrammable eateries anywhere. And it just got a little hipper for the holidays, because nothing says “Christmas meets Bedford” like a holiday pop-up bar called Snowday In Brooklyn. The decorations are self-described “delightfully over-the-top,” and the selection of holiday beverages is divided into a beer list, a wine list, a naughty list, and a nice list. The best part? They also have tableside raclette with a flair — topped with bacon, sour cream, and hot sauce. — 68 South 2nd St., Brooklyn, NY 11249

Try a little DIY raclette for those on a budget. The East Village staple Ideal Cheese Shop stocks three different kinds of the cheese, ranging in price from $18 to $30. And you’ll get a lot more bang for your buck then you would at a restaurant. Just add potatoes, cornichons, and meat and you’re all set for a cozy indoor adventure. — 942 1st Avenue, New York, NY 10022

Looking for something special to give your favorite foodie this Christmas? Hoboken’s Cheese + Wine sells a French Gift Box that includes a half pound of raclette, a half pound of Abbaye de Belloc cow’s cheese, cornichons, mini toasts, and truffle mousse. Uncork a bottle of hearty red wine and you’ll have an excellent spread for your next holiday party. — 720 Monroe Street, Hoboken, NJ 07030