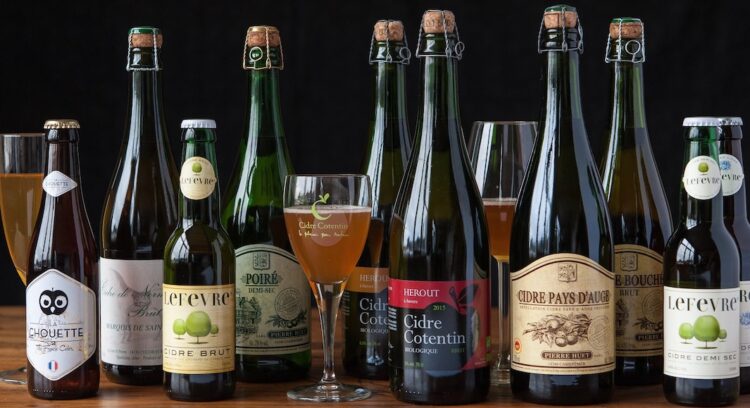 It’s that time of year: Your least favorite friend couple is posting on Insta all about their apple picking adventure, replete with sunny skies, blushed apples, Bean boots and natty outfits; your aunts are fighting over who makes the best apple pie (neither, they’re both dry); and you can’t visit your local farmer’s market without feeling like you’re being bombarded by overpriced apple juice and apples that look like they got good doses of steroids.

But there’s one good thing about apple season: cider. Yes, the adult kind. And we’re not talking that sickly-sweet, headache-in-a-bottle stuff you drank in college. (Looking at you, Angry Orchard.) We’re talking grown up craft cider, treated with the same care and attention as your annoying ex-boyfriend’s favorite small batch IPA.

While France is generally considered the world capital of wine, few people know that the country produces some of the best hard apple cider in the world. The apple-loving northwest region of Normandy is famous for its mostly-local production of cider. French cider is hard to find in the States, where domestic apple products dominate the market, but that doesn’t mean it’s not worth seeking out.

French cidre tends to be lighter, sweeter, and lower ABV than comparable ciders in the US or UK. A process called keeving is used to slow down fermentation and produce a sweeter, more flavorful cider. There are two main types: cidre brut, which is drier (though still sweet) with an ABV around 4.5%; and cidre doux, which is sweet, as the name suggests, and can be as low as 2 or 3% ABV. These ciders are typically served alongside galettes bretonnes, or buckwheat crepes (not to be confused with fruit galettes, a kind of rustic pie). Bonus: these crepes are gluten free!( As is cider!)

Fans of something stronger might be familiar with Calvados, an apple brandy or eau-de-vie, also originating from Normandy, with an ABV of 40%. It’s excellent by itself as an after-dinner digestif and makes a fabulous seasonal cocktail as well. (The Breton version from the neighboring region of Brittany is called Lambig.) Another lesser-known beverage is Pommeau de Normandie, an apéritif made from apple brandy and unfermented apple juice, clocking in between 16 and 18% ABV.

Cider doesn’t even always need to be made from apples! A variation of cidre called poiré uses pears, another seasonal and local staple of northwestern France, producing a light beverage at barely 2% alcohol by volume.

For those looking to mix up flavors beyond a traditional glass of cider, you can try a Kir Breton. Sometimes referred to as a Kir Normand, this beverage is a twist on the traditional French drink Kir, which consists of a glass of white wine topped with crème de cassis. In a Kir Breton, cider mixed with Calvados is subbed in for white wine and makes a drink that is equal parts sweet, tart, and bubbly.

While there are countless places to try all of these drinks in Normandy and Brittany, it might not be so easy to rent a car and get out into the trenches of rural France if you are visiting Paris. Luckily, there are some great places in Paris where you can sample an authentic glass of French cidre. With a craft cider culture brewing in the City of Lights over the past few years, a taste of Normandy is barely a metro ride away.

Breizh Café, named for the Breton word for Brittany, is a hugely successful chain of rustic-chic galette restaurants found throughout France. Created by Brittany native Bertrand Larcher, these restaurants combine traditional Breton cuisine with Japanese influences, which explains their motto: “La Crêpe Autrement” (“The Crepe Done Differently”). While all of their Paris locations carry Breton cider, their Montorgueil location in the 2nd arrondissement has a speakeasy beneath the restaurant with a dazzling cocktail list in addition to their more traditional offerings.

The burgeoning Parisian craft cider culture owes a lot to Benoît Marinos, founder of La Cidrerie. Disappointed at the lack of cider offerings and respect for local production he found in France, Marinos decided to study at a school for cidricoles (cider makers) in Normandy, before returning to Paris to open his cider mecca. With 80 ciders and 20 poirés available, you’d be hard pressed to find a more extensive cider collection anywhere in the world. Stop in for a sampling and some tapas at one of their two locations, in the Marais or in Batignolles.

For a hip cidery with a sense of humor, turn to Brutus. With two locations, one in Batignolles and one in Gaîté, this galette shop for “cidrologues & crêpophiles” (“cider experts and crepe lovers”) is keeping both ends of Paris well fed and refreshed. They have 25 organic ciders on rotation from Normandy, Brittany, and the Basque region, and make specialty cocktails using cider and poiré. An emphasis on seasonality and high quality means that you can enjoy products so fresh, you’ll feel like you picked the apples yourself (and then posted about it on socials).

So often do we speak of galettes when talking about food from Brittany, that we almost forget the region’s other famous specialty: oysters. The Galette Café, in the 7th arrondissement, serves up cider, oysters, and both sweet and savory crepes in a modern industrial setting. Enjoy a deliciously sweet Pommeau or Kir Breton to balance out the briny oysters.

Another Breton-style crêperie, La Cidrerie du Marais, is a low key, no frills spot for a ham, egg, and cheese galette accompanied by a glass of cider. Perhaps you could even skip dinner in favor of a salted caramel dessert galette, a common Brittany dessert.