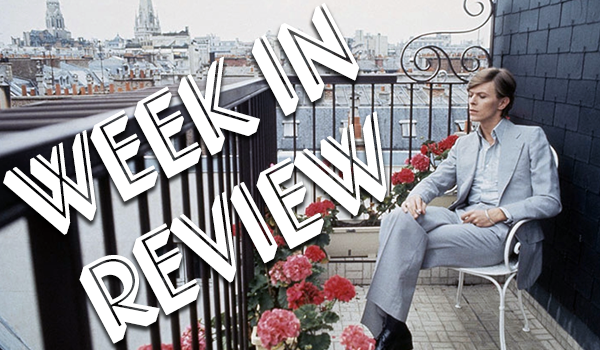 On Monday, France awoke to the news that David Bowie—the only Englishman to be more French than any fifty randomly selection French people—had died at the age of 69. Luckily, he made time to record a French version of “Heroes” during his stay on our planet.

Jean-Marie Le Pen, former head of the Front National, is suing one of Madonna’s ex-boyfriends for taking a selfie with him while he was sleeping on a plane, which lead directly, of course, to the defeat of the FN at the polls.

Meanwhile, in Marseille, a teenager attacked a 35-year-old Jewish teacher with a machete. He later told police that he had done it in the name of Daesh For American gun rights advocates: the teacher survived the attacked, which would’ve been much more unlikely had he used a gun. That’s the difference.

Tuesday, just in case you needed more proof that violent extremists are mostly people working out their religion-induced sexually frustrations, it turns out the man who tried to attack a Paris police station last week had been arrested in (where else?) Cologne, Germany in 2014 for groping women at a nightclub. His suicide vest, by the way, was fake—Freud, take it away!

We learned more about Marie-Antoinette’s love affair with Swedish count Axel de Fersen than we needed to know, including that some of Louis XVI’s issue were not, strictly speaking, his. Still not as interesting as President Warren G. Harding’s hardcore love letters, though.

Meanwhile, France, that supposed socialist daydream, sentenced trade unionists to nine months of jail time for kidnapping their bosses at a Goodyear tire factory, even though the company and both managers  declined pressing charges.

Two schoolchildren on a ski trip were killed in an avalanche on Les Deux Alpes in Isère, and at least three more were injured. A Ukrainian man who was not with the school was also killed. The ski run had been closed, but it is unclear if the slope was still marked.

Workers with Eurotounnel started flooding the area in Calais that’s become known as the Jungle refugee camp, and government officials have said they intend to knock down part of the camp, with the displaced displaced persons being relocated to converted shipping containers.

In much happier news, Le Carillon, one of the restaurants in the 10th arrondissement targeted in the November 13th terror attacks, reopened only two months after 15 were killed there. Le Petit Cambodge, which still hasn’t reopened, joined their neighbors for a drink.

Please, for the love of god, make sure your coat has completely cleared the Métro doors.

Thursday, a 73-year-old city councilor in Créteil was found dead in his apartment after failing to show up to synagogue, the latest in an apparent rising trend in anti-Semitic attacks in France recently, including a machete attack in Marseille.

After news of police raids on three Renault sites, the company’s share prices dropped 20%, rebounding by half following following reassurance from the French government that there is Volkswagen-level fraudulence being investigated.

Charlie Hebdo didn’t not get in trouble for an editorial cartoon.

Someone received an unpleasant surprise in their galette des rois:

Friday, David Bowie’s Blackstar was at the top of SNEP’s album charts and is on track to summit the charts in both the U.K. and the U.S., where it will mark Bowie’s first-ever #1 album (The Next Day made it as far as #2 in the U.S. two years ago).

And just to have one more thing to worry about over the weekend: two French senators penned a 50-page report about how, among other things, terrorists might hide out in the Métro disguised as homeless people in order to carry out attacks. Because we’re talking about France, the senators propose eliminating the homeless problem in the Métro system, which leaves terrorists with only one option: blending in with everybody else. In case jihadists posing as homeless people in order to blow things up doesn’t scare you, here’s a list of other things terrorists might disguise themselves as: