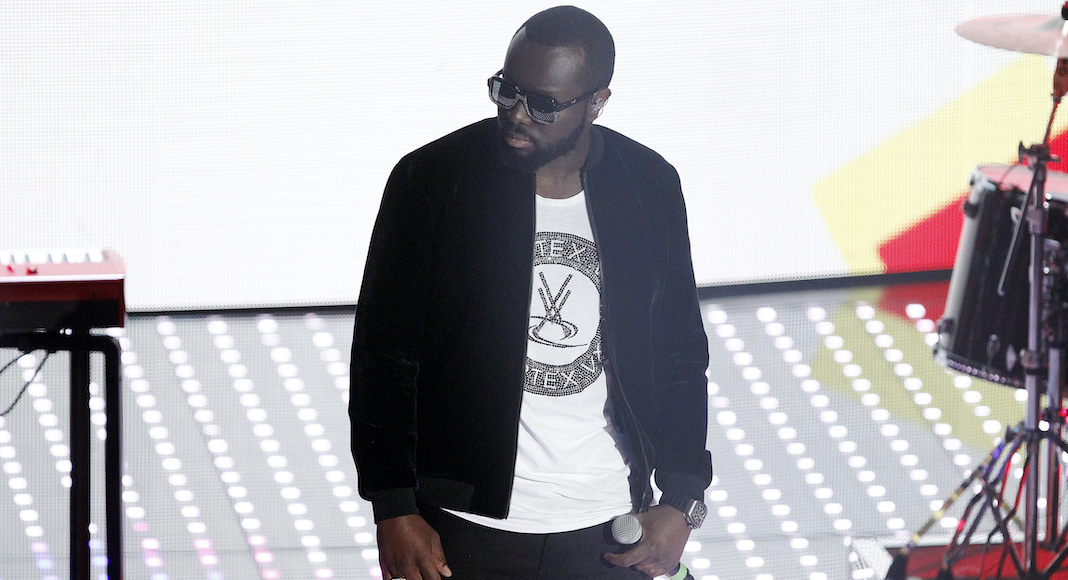 “It’s very hard to pigeonhole me,” narrates Maître GIMS at the opening of his new documentary, GIMS: On the Record.

And he’s right. The French-Congolese rapper is a mega star as well as physical proof of the evolution of French pop music over the last couple of decades. He’s the most-played artist on French radio, having sold more than 5 million albums. His influences span everything from reggaeton to manga. And you never quite know what he’s going to do next.

In 2019, GIMS became the first African, the first rapper, and the first urban singer to perform at the Stade de France outside Paris, in a sold-out show of 72,000 people. But in the months leading up to this historic event, GIMS let a Netflix crew take a trip back through his personal history.

GIMS was born in 1986 in Kinshasa, Zaire (now the Democratic Republic of Congo), as Gandhi Bilel Djuna. GIMS’s parents moved to Paris when he was a toddler, to escape the wrath of Joseph-Désiré Mobutu, then the dictator of Zaire. The politician was notorious for seeking vengeance on his enemies, and GIMS’s father, the popular African singer Djanana Djuna, had released a song critical of Mobutu. GIMS spent most of his childhood in welfare homes and squats, coming back from school some days to find that his “home,” with no hot water or shower, had been raided by police, and that they had to find a new place to stay. At 15, after his parents’ divorce, he dropped out of school, and spent his days wandering the streets of Paris, sleeping in stairwells and on metro cars. It was around this time that GIMS met rappers Maska, Lefa, and Barack Adama, with whom he formed the group Sexion d’Assaut, generally considered to be the group responsible for the rap revival in France, circa 2010.

Part of GIMS’s charm at the start was his “grosse voix,” or “big voice,” and his choice to sing in addition to rapping, which had been considered “feminine” by hardcore rappers of the time. But adding sung choruses, in addition to showcasing his dynamic vocal range, allowed him to produce songs that were more accessible to people who didn’t consider themselves rap fans.

“He has a lot of things that people usually don’t like, but people love him,” says his wife, DemDem, with whom he lives in Marrakech with his young children. More than once throughout the documentary he is compared to French soccer celebrity Zenedine Zidane, with commenters weighing in on the surprising success of GIMS’s over-the-top image in France, a country that usually prefers its celebs to keep a low profile, like the famously reserved Zidane.

GIMS is depicted throughout the documentary as a king constantly striving to maintain his crown, a prolific writer who never has a moment when he isn’t thinking about his music. GIMS is number one and feels the pressure to stay there, even as his own brother, Dadju, manages to continually follow him up the charts.

But GIMS understands that flashing bling is only a part of the role of the uppercrust. “You can show off, but after, you give back. You can’t just make people dream. You need to give people opportunities, reach out.” In the documentary, he visits his hometown, and the neighborhood of his infancy, the Yolo quarter in Kinshasa, where you see him promising to do a free concert to wildly adoring fans. And he follows through, later singing to a rapt audience of his countrymen and -women, in what looks like a stage plopped in the middle of a parking lot.

Later on, GIMS and other members of Sexion d’Assaut talk about how converting to Islam acted as an antidote to some of the more negative avenues and attitudes that rappers often get pulled towards, and how, for GIMS, it created a framework for him to be a better father. But he admits that there was a dark side as well, and talks about the ease with which new converts can be “weaponized” if they don’t take the right precautions. Even with that mindset, however, GIMS has had to publicly disavow the increasingly frequent acts of terrorism in France and North Africa, carried out by Muslim extremists.

“The Congolese singer is more than a musician. He’s a politician. Music there is so important that a singer is an ambassador, a representative of the country. People ask more of him.”

Many celebrities try to cast themselves as humble servants to the public, people who are “just like you and me.” But GIMS represents a mold for ethical celebrity founded on an apparently contradictory African attitude: flaunt your wealth, but don’t forget to share it. Remind your fans that they are not like you, but with a little bit of help, someday they could be.