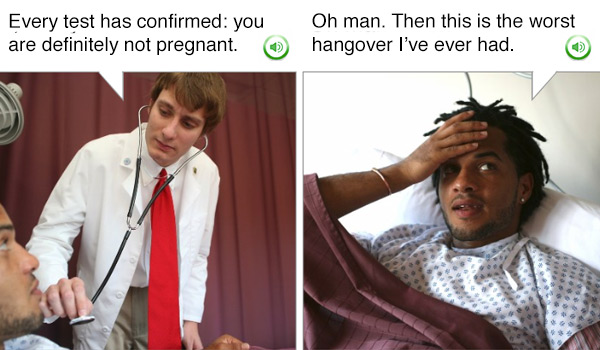 Pregnant in Paris: Breaking the News to the World, Your Bosses, and the Public Administration

French Morning’s English Edition has an announcement: we’re pregnant in Paris! Well, this writer is, anyway. Month by month, you can follow my trek through the quirks, surprises, and reliefs of having a baby in the land of all things unpasteurized. Take a look at our last installment if you missed it. This month, it’s all about the big announcement and delving into the world of red tape, baby edition. We’d love to hear about your own experience!

Quinze semaines: Breaking the News to the World, Your Boss, and the Public Administration

This is a universal truth: by the end of the third month of pregnancy, nausea tends to subside for many women. Gone are the days of feeling like you have a perpetual, never-ending hangover. You wake up in the morning, turn up the music, and revel in the joy of feeling hungry for breakfast. Life becomes like a Special K commercial—soft white light and form-fitting tank top included.

I was warned, again and again, that even after the constant nausea disappeared, I might remain sensitive to some smells. I stepped on the métro, inhaling what were anything but pleasant scents and feeling oddly proud of myself for the lack of gag reflex. As Line 4 came to a halt at my stop, I took the stairs two by two, a spring in my step. Ah, fresh air. And then I felt it. It was no longer a gag reflex, no longer a pang of nausea. This was something else entirely: sheer, utter disgust and annoyance. The culprit? Cigarettes.

At once, I became my mother, coughing loudly at the slightest whiff of smoke, my face contorted like someone had just insulted my most profound beliefs. As a Paris dweller used to complaining about everything and anything, smokers jumped to the top of my list. They are everywhere: during one twenty-five minute walk to work at eight in the morning, I counted thirteen. Fancy a lunch break at a heated terrace? That would be like begging for a toddler-level fit. From one day to the next, strolling around Paris feels like walking right smack into a wall of smoke that I had hardly noticed in the past. Silver lining? There’s a new power-walker in town. Just don’t ask me to hang out with you while you take a smoke break.

Smell sensitivity aside, pregnancy in France means entering a whole new realm of administrative paperwork. You think filing your taxes in the United States is complicated? Try having a baby in France. Truth be told, it’s for a good cause. If I had to file the same amount of paperwork and pay a frighteningly high amount to give birth in a hospital, not only would I be complaining but it would also mean I was living in a different country. Signing up to give birth in a public hospital in Paris means getting some of the best pre- and post-natal care in the world, for little more than a handful of euros (and generally high income tax). The lines to sign up at some of the top Paris hospitals may be longer than the ones in front of a casting call for The Voice, but as with anything in France, it’s first and foremost a question of being organized. Grab a pretty notebook, use the perfectly good excuse to purchase a nice pen, and you’re ready to tackle the red tape.

I was bracing for a new level of hassle to get a spot at Necker, one of France’s top public hospitals and specialized in pediatric care. Necker is at the forefront of genetic research in pediatrics, which sounded pretty nice overall, and they have everything pretty well-covered in terms of equipment and staff should anything at all happen to the mothers or babies during delivery. Did I mention the waiting area chairs are Eames-designed and multicolored? I was prepared to use sweat and tears to put my foot in the door–yet it turned out that calling early enough, at around 12 weeks, was enough to get my first appointment with a midwife. I know something had to be lurking in the shadows.

It started with the slip of paper you use to declare your pregnancy to various government agencies, to ensure you get reimbursed for the specific prenatal care a future mother needs. A white slip, blue slip, pink slip: each to be sent to a different branch of the health care system. Since then, my life has been a non-stop relay between the post office and my copy machine at work to send in the right forms, at the right time. Mothers in Paris tell me it only gets worse when you start the process to sign up your yet-unborn child for daycare. That’s where the sweat and tears really, actually come in, they say. My notebook tells me I have another ten weeks to go before I have to start thinking about it.

Once the white, blue, and pink forms are sent, in comes another major step in the adventure of pregnancy in France: telling the boss. There comes a day when you have to walk into work and make the announcement everyone has been gossiping about ever since you started the never-ending dance of copy machine to post office to doctor’s office. Often, office bets are balanced between whether you’re interviewing somewhere else or pregnant–and being over 25 and married makes many lean in favor of the pregnancy vote.

The day of the announcement has to be well-timed in France. In the United States, in some companies, giving birth means you’re out of the office barely long enough to set your automatic email reply. In France, it means leaving work for a minimum of sixteen weeks: something companies need to anticipate and plan carefully so the transition out of the office and back is as smooth as possible. In short, announcing a pregnancy isn’t like asking for a week off to hang out on a beach in the south of France. Beneath the congratulations, your hierarchy will be doing the mental math on when you’re leaving, when you’ll be back, who can take over your projects, how much hiring a temp to replace you would cost, if the department has enough budget… you get the idea. That’s why timing is key: I waited until I felt like my bosses were in optimal moods, had an available slot in their schedule, and wouldn’t be caught off-guard (well, not too much). Success!

Now that my colleagues can say they knew it all along (even if they hadn’t), I don’t have to lie about my “food” baby and feel a little better about indulging in that apple at snack time. You read that right: indulging in an apple. If you read the previous installment of Pregnant in Paris, you might remember that the phrase “eating for two” is like mentioning the devil. Every extra kilo beyond the one-a-month rule will be hard to shed off, we hear. Even better? Being told not to eat fruit outside of meals to keep weight and sugar in check–and that’s without any blood sugar or weight-gain issues of any sort. Back away from the grapes, ma’am.

Next time: garcon ou fille? I’ll take a head-first dive into French baby names, why Otis isn’t an option, and more adventures in the land of la grossesse. Stay tuned!