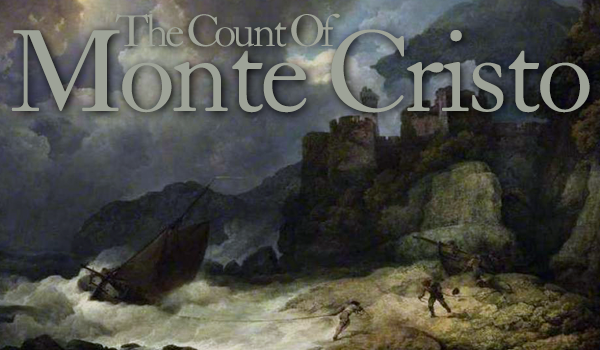 The Count Of Monte Cristo, Part 1

Welcome, bienvenue, come in: this is the first installment of Mort de Lire, a review series aimed at getting readers up to speed with all the French classics they tell everyone they’ve read, even when they have decidedly  not read them. Literary enabling? Perhaps. If used for their intended purposes, these articles will surely eat slowly away at your soul until you actually read the books in question.
First, the background:  The Count Of Monte Cristo  was written by Alexandre Dumas (Père, this edition says; his son also wrote books as Alexandre Dumas,  fils) and released in 1844 as a serial, the same year  Charles Dickens published  Martin Chuzzlewit,  Honoré de Balzac  debuted  Les Paysans, and Karl Marx came out with  On The Jewish Question, in ascending order of make-believe. Paul Verlaine, Anatole France, and Friedrich Nietzsche were all born in that year, although most likely to different parents.
The book takes its name from an actual island in the Mediterranean between the island of Elba and the Italian coast. It is a rocky island with little on it. The book is also the namesake of a famous brand of Cuban (and Dominican) cigars: the Montecristo. As with Romeo e Julietas, the cigar gets its name, according to myth, from the men who used to roll the cigars in Cuba. To pass the time before earbuds and podcasts, books would be read to the rollers. When they heard The Count Of Monte Cristo, they listened intently all the way to the end. And then they asked to hear it again, on and on into history. That’s why the cigars bear the name of the book.
Second, why you should actually read this book: unlike Dickens, whose serialized works smack of a lack of planning and, to be honest, a writer who is being paid by the word, Dumas does not bandy about with unnecessary characters and plot lines. Far in advance of Anton Chekov’s birth, Dumas was already observing the rule of Chekov’s Gun: if you show a gun in the first act, it must be fired in the third. Nothing goes to waste in this book, not a description, not a word of dialogue. It is, like any good plan—whether it’s for revenge or escape—machined within a micron of its life; it is made entirely of literary Lego blocks.
And if you should doubt the capabilities of Monsieur Dumas, Monte Cristo wasn’t the only book he produced in 1884—he also released another serial that year: The Three Musketeers.
Here we are: your last chance to avoid a catastrophic mistake. You cannot know what evils will be visited upon you in the future for one single, seemingly insignificant sin now. The Count would warn you himself, if you would be good enough to listen.

Listen:
Edmond Dantès is a young man, already first mate of the merchant ship Pharaon, based in Marseilles. He is “tall, slim, with fine dark eyes and ebony-black hair” and the “calm and resolve peculiar to men who have been accustomed from childhood to wrestle with danger.” His captain is dead, and Dantès is named his successor when the ship comes into port. His employee, Monsieur Morrel, is glad to have him back safely and even gladder to make him captain, even at so young an age. Not everyone is so happy at Dantès’ youthful good fortune, though—the ship’s supercargo (that is, the man charge with taking account of the goods going in and out of the ship) thinks Captain Dantès unlikely to keep him on. That supercargo, Danglars, our first villain, mentions to Morrel that upon the captain’s death, Dantès took possession of a letter, made an unscheduled stop at Elba, and returned to the ship carrying yet another letter.
The year, by the way, is 1815. Any French historians reading this can probably feel the hair on the nape of their necks prick up—but then, they’ve probably already read the book. Depending on your grasp of high school-level world history, you may, at the very least, have suspicions: Elba… wasn’t that the island where…
Yes, now that you mention it. Yes, it was.
Satisfied with Dantès’ answer regarding the captain’s death, Morrel releases him to return home to his aging father. Dantès discovers his père has been living in penury during his absence, having paid a debt his son owed to their downstairs neighbor out of what little money he was given to live on. The debtor, a tailor named Caderousse, visits the Dantès family, all goodwill and glee that his debt was repaid, but full of baleful, bad news: Edmond’s fiancée, the lovely Catalan Mercédès (equipped with a V8, for sure), is a beautiful girl, and her cousin has been doggedly at her side in his absence. That’s our second villain accounted for.
Edmond sets off to find Mercédès, who he has not seen for months, and discovers her still as true and faithful as when he left. Her cousin Fernand has mistaken his absence for something more like death, confessing his love for Mercédès while she rebuked him as her closest and best friend, her only brother in the world. When he runs from her house, all flight and no fight, Fernand comes upon Caderousse and Danglars, sitting at a public house and waiting to see if, at least in one way, Fate has dealt Edmond a bad hand with Mercédès.
And there sit our three villains: Caderousse, steeped in alcohol; Fernand, burning with jealousy; and Danglars, a man adept at running numbers.

This is your last warning. You have not yet sinned against The Count Of Monte Cristo. You have simply clicked “Free Sample” and read, at best, the first three chapters. You know less than if you watched the trailer for the 2002 adaptation—one of thirteen films based on this book, to say nothing of the seven television adaptations, including one starring famous Russian actor Gérard Depardieu.
Still there? You will be interested to know that, like yourself, the next chapter is concerned with “The Plot.”

Join us next week for the second installment of <