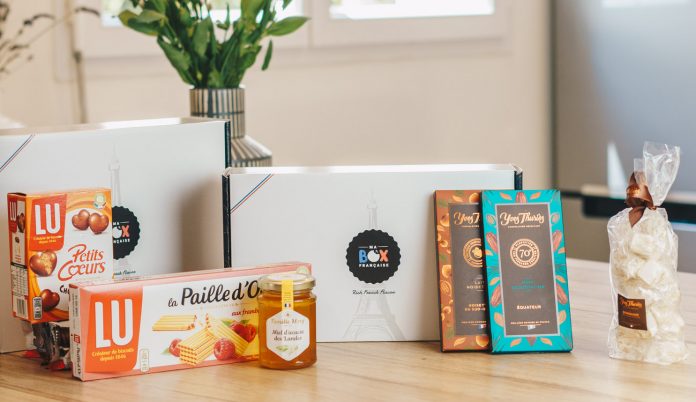 Originally from Nice, Merry Gelinard spent more than two years studying in Los Angeles. There she discovered what many expats experience: “the lack of French products, from the most classic – those that I wasn’t really interested in when I was in France, when they were widely available – to the most gourmet.”

At the time, in 2015, she discovered Miam Miam Box, a monthly delivery service for French sweets, and subscribed to it for a few months. Back in France after her studies, the young Gelinard, now 27 years old, decided to take up the torch again: “the couple behind Miam Miam Box split up and the project stopped while there was still demand,” she explains. “I wanted to link what I consider to be my two countries, France and the United States. Before arriving in the latter, I found the idea of creating a company inconceivable. I thought the experience was difficult, if not impossible.” The United States proved her wrong: “All my friends were self-employed entrepreneurs. I realized that when you want to, you can; and that you have to surround yourself with the right people.”

Ma Box Française will be launched in September, with a monthly subscription between $49 and $75 for a package of six to eight products. Delivery (free for those with subscriptions) will be provided throughout the United States. Several options will be offered: a classic box, a gourmet box, customizable boxes (“think birthday and baby showers”), and an online grocery store with the possibility to buy individual products. “There will be no delivery in France,” says the young entrepreneur, who is targeting a clientele composed of “expatriates nostalgic for the flavors of their childhood,” and “American friends who like French products not found in the United States.” For the gourmet box, Gelinard has signed partnerships with Maille, Arostéguy (a grocery store in the Basque country), Yves Thuriès (a French chocolate maker), La Toque Cuivrée (a Bordeaux cannelés producer), and Famille Mary (a French beekeeper). As for the classic box, it will be composed of products hand-selected by Gelinard at wholesale prices. “You’ll find LU, Bonne Maman, BN, and Haribo products,” says Gelinard, adding that the list is not exhaustive.

Her market research has led her to identify two direct competitors: Yummy Bazaar and Le Panier Français. In order to stand out, she wants “to be able to do B2B, i.e. to sell my products to other companies and thus find my boxes in different grocery stores across the United States.” In the long term, she also wants to “offer French cosmetics for sale, organic and eco-responsible products.”