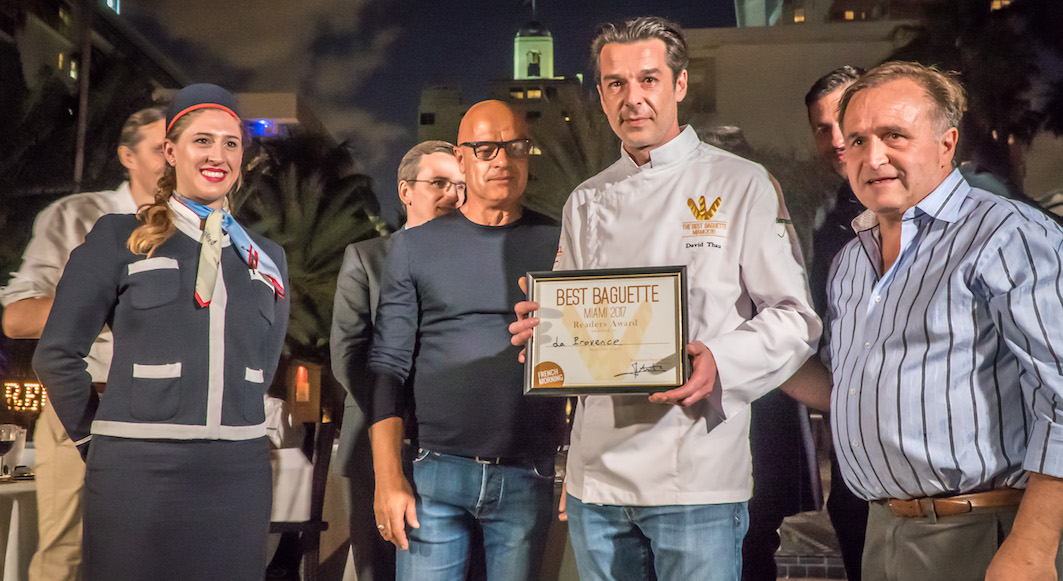 The foodies in the room couldn’t get enough of the fantasy they were living at Baguette Battle Miami.

Back for its second edition, the final round of Best Baguette Miami played out at the National Hotel in Miami Beach on Thursday night. More than 200 guests flocked to the event to taste the breads of the five bakeries—as nominated by the readers of French Morning—competing for the Grand Prix. Each bread’s appearance, taste, and texture were under close scrutiny by the esteemed jury and the public.

The members of the jury were in total agreement about the high level of talent at the competition. Jury member Frederic Joulin, director of the Semilla Eatery & Bar in Miami Beach, commented on the fierce competition: “We were judging true artisan bakers, who worked hard to perfect their recipes, and who bake bread of a quality that’s on par with the biggest Parisian boulangeries.”

David Thau and his team at La Provence proved to be a real double-threat this year, taking home both the Grand Prix from the jury, and the Prix des lecteurs (Readers Prize). Thau was nearly bursting with joy when the results were announced. “It’s a beautiful recognition,” he remarked. “For the past two weeks, we’ve been refining and perfecting our recipes, and I’m so happy to see that our hard work paid off.”

The 2016 winner of Best Baguette Miami, La Parisienne was back again looking for a repeat win, but were ultimately dethroned. “It’s a real disappointment,” said head baker Embarek Alibey, who nevertheless was keeping things in perspective. “The most important thing is that we made our products just like we normally make them on a daily basis. Despite the loss, I’m incredibly proud of my team.”

After the audience tasted each bakery’s bread with cheese, charcuterie, and a glass of wine, they decided that the Italian boulangerie Rosetta Bakery in Miami Beach, founded in November 2015 by Tommaso Bulfon, would take home the Audience Prize.

Dario Cestaro said, “Italian bakers don’t blush in the face of the French,” and on Thursday night the son of the owner of Buon Pane Italiano was proven correct. The Italian bakery opened in Miami Beach in April 2015, and just two years later owner Walter Cestaro and his talented team cinched the Specialty Bread prize.

The Meilleur Ouvrier de France and owner of Chocolate Fashion Georges Berge left empty handed, but in good spirits: “It’s not too bad, because despite losing, I still had fun. I also won a lot of awards when I was younger, so I’m not chasing after gold medals as much anymore. You have to know when to step aside for the next generation.”