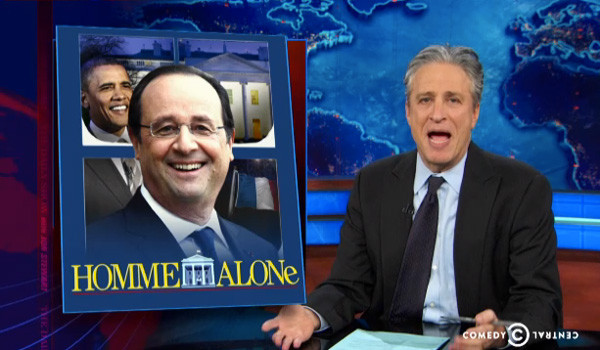 We here at French Morning love Jon Stewart and we like to think of him as a bit of a francophile too. With so many spot-on take-downs and musings over France and its media, how could he not be? So in honor of the comedy legend’s impending retirement, here’s a look back at 11 memorable Daily Show nods to Stewart’s amis across the Atlantic.

11. That time Jon Stewart asked Christine Lagarde to “fire a couple of bankers” for the US.

10. That time he made fun of the US media for obsessing over Hollande’s solo visit to the US. “Why isn’t the croque monsieur bringing his croque madame?”

7. That time Jon Stewart added the implausible hotness of bureaucrats’ female companions to his “list of things I don’t understand about France.” This 2012 clip starts with Greece, so be sure to watch until at least 02:49.

6. That time France kept the U out of the EU by uncharacteristically behaving “in a contrarian manor.”

5. That time Stewart mused that newly-launched 24-hour news channel France 24 would bring more than a little je ne sais quoi to the format (if only…).

3. That time he invited France over to “Camera 3” to discuss colonialism and the Statue of Liberty (“turned green instantly”).

2. That other Camera 3 encounter where he called France an “invader hater.”

1. That time he said that Ségolène Royale was just like Hillary Clinton but with a certain je ne sais quoi. “Je ne sais quoi being French for ‘way more chance of being elected president.'”

A Look at the Most Beautiful Villages in France