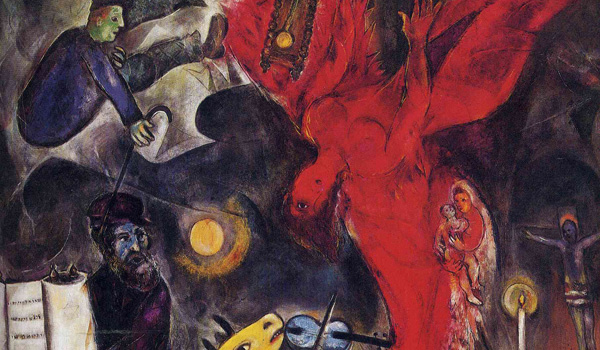 “Chagall: Love, War, and Exile” at the Jewish Museum

While the works of Marc Chagall (1887-1985) are widely shown in the great museums of the world, few exhibitions have focused on the years between 1930 and 1948, a time of war and dislocation.

Known for his exuberant, colorful fusion of Russian folk imagery and contemporary artistic styles, he reacted to the cataclysmic events with intensity, creating art that reflected both the dark mood of the times and his intense love for his wife, Bella, and after her death, for his new companion, Virginia Haggard McNeil. Organized by The Jewish Museum’s senior curator, Susan Tumarkin Goodman, the exhibition includes 31 paintings and 22 works on paper, as well as selected letters, poems, photos and ephemera.  The museum is also presenting a series of programs from October to November, featuring Bella Meyer, granddaughter of Marc Chagall, historian Kenneth Silver, and artists Amy Sillman and Peter Doig.

“In looking through the body of work created by Chagall,” Goodman says, “we find that work from the 1940s and 1950s intimately relates to the artist’s life and experiences. He responded to global events as well as his own personal losses. A period that has been relatively neglected and overlooked, it includes images with a complex metaphorical imagery. I believe that by reevaluating his art in the context of his life, we will come to a new understanding of the artist.”

Leaving the hardships of Soviet Russia behind, Chagall had moved to Paris in 1923 with his wife, Bella, and daughter, Ida, soon embracing French artistic traditions to create large, joyful paintings of floral bouquets. Combining the Russian Christian iconography with the new Cubism and Surrealism that he encountered in France, he attracted an increasingly admiring public. “The soil which had nourished the roots of my art was Vitebsk,” he said later, “but my art needed Paris— like a tree needs water—otherwise it would have withered.”

In the ‘30s, his style began to change in reaction to the rise of Hitler in Germany and his relocation to the United States in the ‘40s at the peak of his career. He had received the Carnegie Prize and had been honored with a retrospective exhibit in Basel. In New York, he had a major retrospective at the Museum of Modern Art in 1946. But success did not make him any less affected by the political climate and his geographic location. While he had used the image of Jesus and the crucifixion in his work in 1912, he did not return to it until 1938 at which point anti-Semitism was escalating throughout Germany and in Europe. His use of Christian iconography then became especially pronounced.

“The Jewish Jesus as employed by Chagall was an expression of Jewish suffering and persecution,” says Goodman. “He equated the martyrdom of Jesus on the cross with the contemporary plight of Jews. He continued to use the figure of Jesus for the rest of his life. After the war his depictions of Jesus is calm; the figure is at peace, he is melancholy but no longer in pain. It is understood that the crucified Jesus is the symbol for the martyred millions. His art began to reflect a more familiar Chagall as expressed in joy-filled paintings replete with intense color and levitating figures as the horrors of war receded.”

Organized in four sections, Time is a River, War and Exile, The Jewish Jesus, and The Colors of Love, the exhibition features works from collections in Europe, the United States, Israel and South America. They include the large easel painting, “The Fall of the Angel,” expressing his torment during the war;  the affectionate “Bella in Green,” the last traditional portrait of his wife, “The Juggler,” depicting the human condition with the head of a cockerel, body of a man, and wings of an angel, and Bella’s actual sketchbook, which can be viewed on touchscreens.
http://www.thejewishmuseum.org/ChagallLoveWarExileRelease