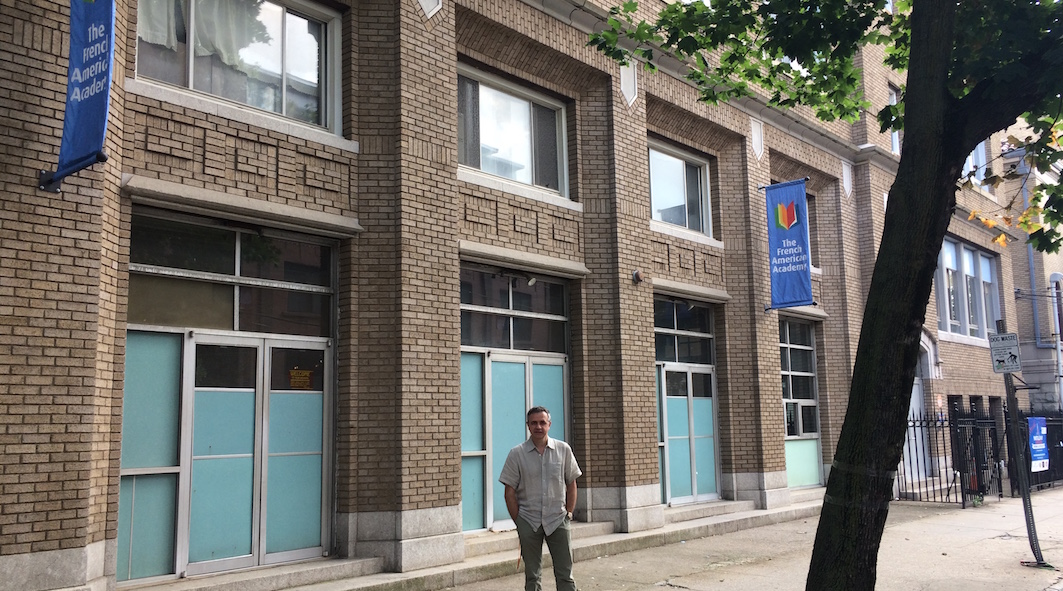 For le 14-juillet, Jean-François Gueguen will be doing what most of the French people in New Jersey are doing. “I’ll go to 60th street to FIAF’s Bastille Day. It’ll be two hours transit there and back. Or I’ll go to some small, local parties along the Hudson.“

Saturday, July 15, he won’t need to make the commute. The French American Academy (FAA), the school he founded with his wife Anne-Sophie, will be hosting the first Bastille Day in Jersey City. “The French population in Jersey City doesn’t get together, but that’s about to change. There are a lot of French people here,” he exclaimed. “It should connect the French community of New Jersey to one another. We don’t need to go to Manhattan or Brooklyn to celebrate le 14-juillet, we’re proud to be the French people of New Jersey.”

For Gueguen, the interest in the event reflects the city’s growing French community who were first attracted to Jersey City, like many others, by lower rents than those in Manhattan and Brooklyn, and the proximity to New York. The presence of FAA, an accredited bilingual school, isn’t just a coincidence. “Jersey City is in the process gaining more and more French people. It’s great for the school. But other than that, Jersey City has lots of charm. The businesses who were in southern Manhattan came here after 9/11 in search of a plan B. For the last 10 years, Downtown has been developing. It didn’t used to be beautiful or clean, and that’s totally changed.”

To be “representative of this growing community“, this first edition will meet on 3rd street, the same street as the French American Academy, several local restaurants and pastry shops like ChocoPain and Madame Claude. There will be plenty of room for several groups of musicians and Cancan dancers to enliven the party. Pétanque lovers will be able to show off their talents. On a little side street, organizers want to reproduce the Place du Tertre de Montmartre, with French painters who can sketch the portrait of the curious few. And of course, “all the alcohol will be French,” boasted Gueguen.

This first 14-Juillet will not be the grand fair of FIAF that takes over 60th, attracting thousands of curious people to Manhattan. “We’re keeping it simple,” said Gueguen. “If we have 1,000-2,000 people, that’d be great. We have room to grow!” The Frenchman hopes that New Yorkers will give into the temptation of seeing what this event is all about—they’re the only event on July 15 (FIAF is July 9, and Smith Street is July 16). “It’s less trendy than Manhattan, but Jersey City has all the charm.“