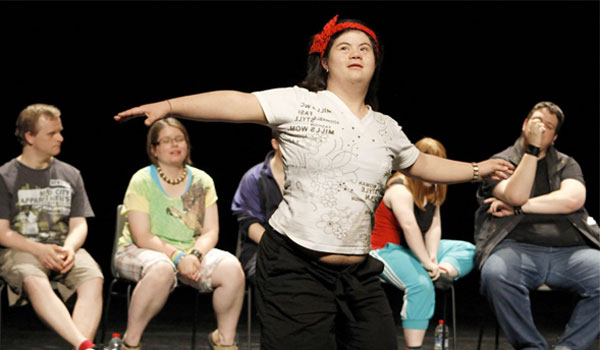 French conceptual performance artist, Jérôme Bel, has built his considerable reputation on stripping away all stage artifice to create more honest connections between audiences and performers and for productions that stretch the boundaries of the philosophical underpinnings of dance.

So it isn’t surprising that Zurich’s Theater Hora, Switzerland’s professional theater company comprised of actors with learning and mental disabilities, approached him a couple of years ago, hoping to collaborate. Founded in 1993, the troupe has presented about 50 theatrical productions, including plays inspired by Dante, Shakespeare, Joseph Conrad and John Steinbeck. It has also organized art exhibitions, music projects, like the Hora Band, and international theater festivals.

“They invited me,” Bel says in a recent phone conversation. “I would never have thought of working with mentally disabled actors. At first, I said no because I didn’t think it was for me. I have no expertise in disability. I also know this topic is very slippery. But I was curious about their work so I asked if they would send me DVDs of their performances. Watching them moved me a lot. I called back saying that I’d like to meet them. After a day in Zurich, I asked if I could work with them for five days. At the end of that period, I had decided to make a piece for and with them. They were very friendly, very professional and are trained intensively.”

The fruit of their collaboration, Disabled Theater, which was presented last year throughout Europe, including at the Avignon Festival and Centre Pompidou, will be performed November 12-17 at New York Live Arts. The show recounts the meeting and the working relationship between Bel and 11 actors. Freely and subjectively, they react to a series of proposals formulated in German Swiss by an interpreter present on the stage who then translates their answers.  “Frieze” art magazine praised the work’s  “simple, stripped down conceptual clarity” and its “90 minutes of uneasy, preconception-probing estrangement and empathy.”

As the actors aren’t conventionally articulate, making the piece wasn’t easy. Bel had to find non-traditional ways to communicate. “My artistic operation became very simple,” he says. “I’d ask questions and they’d answer. All the material of the performance comes from them. I love their freedom on stage. They do what they want; some of them change things every night. I couldn’t’ believe it. I was very worried in the beginning of the tour, but now I love that they do this. They are very in touch with their emotions. If they don’ t feel it, they don’t do it.  I have had to adapt to this parameter. They pushed me to limits I couldn’t have imagined before working with them.”

He learned a lot in the process. “They can’t really pretend,” he says. “As they are strongly connected to their feelings, their performances are always true. They can’t hide their feelings so on stage they accept them. This is very powerful because they are in the present, they don’t repeat again and again the same things. The audience sees this, sees real emotions, not people acting, but people being.”

Audiences never react indifferently, Bel says, “Some love it; some hate it. The reactions are very emotional.” He has encouraged his choreographic and theatrical colleagues to follow his lead and work with Hora Theater and other groups like it. He has even brought one of the Hora actors into another of his productions. How did he like the collaboration? “The pleasure was endless,” he says.