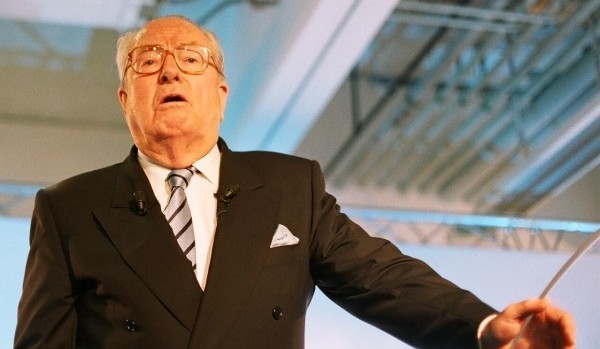 Jean-Marie Le Pen’s most recent offensive statement may have been the spark that finally sets him aflame. Last Friday on June 6th, Le Pen posted his weekly video blog on the conservative French political party National Front’s website. The video (which has since been taken down) showed Le Pen bashing several artists who have taken a stand against the political party, saying that they will not appear in cities that have FN mayors. In response to these artists’ opposition, Le Pen declared, “On fera une fournée la prochaine fois.”

The sentiment is bitter and full of malice. In meaning, Le Pen is threatening to put the artists in their place next time they dare to oppose National Front. Literally, however, the statement directly translates to “Next time, we’ll make a batch.” This allusion to roasting people alive is disturbing in and of itself (the word “un four” literally translates to “oven”), but the jab is especially sinister considering that it was directed at Patrick Bruel, a Jewish French singer and actor who voiced his opposition to the National Front along with Guy Bedos, Madonna, and Yannick Noah.

Jean-Marie Le Pen has nowhere to escape the heat as media and other politicians launch criticism his way. Vice President of the National Front Louis Aliot admitted that Le Pen’s statement was “politically stupid and appalling,” and Gilbert Collard, leader of the Rassemblement Bleu Marine (political party and think tank that supports current FN president, Marine Le Pen), said, “It’s bad form–inacceptable and intolerable . . . I’m tired of these plays on words that really bruise the soul. I would like to say to all who were hurt that I understand.”

It’s possible that Le Pen has permanently burned a bridge with his daughter, Marine Le Pen, who succeeded him as the president of the National Front. Marine Le Pen has denounced her father’s political misdemeanor: “I’m convinced that the meaning behind those words comes from a malicious interpretation,” she says. “If this controversy has upsides at all, it’s that it allows me to remind the public that the National Front strongly condemns any and all forms of antisemitism, of any nature whatsoever.” Jean-Marie Le Pen has drafted an open letter to his daughter, current president of FN, defending himself. Although he claims the letter is “a peace offering,” he has yet to apologize for his remarks, only rationalizing them by stressing that “imbeciles” have misinterpreted his words and that he has the right to criticize a Jewish man without being accused of antisemitism.

But Le Pen’s efforts to cool things down have been in vain, due to his lengthy track record of insidious comments. Just to name a few: Le Pen previously alluded to the Holocaust gas chambers by riffing on an opposing conservative politician Michel Durafour’s last name “Durafour crématoire” in 1988, and he has been accused of denying the Holocaust, saying that the gas chambers are “what one calls a detail” in the history of WWII. With these previous offenses, it would be fatal for Marine Le Pen to show any sympathy to her father. She’ll either have to choose her own career and political party or her relationship with her father to save from the blaze.

Old Vs. New: The Battle Between Taxi Drivers and Chauffeurs

Europeans are back at it doing what they do best: going on strike. Taxi drivers in 7 European cities threw a wrench in many Europeans’ travel plans on Wednesday when they simultaneously went on strike. People were left stranded in Paris, London, Amsterdam, Berlin, Madrid, Rome, and Barcelona as taxis refused to budge. The problem is an all too familiar case of modern innovation side-stepping traditional rules and regulations.

A 5-year-old start-up from California, Uber is a mobile app that allows users to order a private driver in real time. The app’s value reaches around 17 billion dollars, which makes this start-up a record-breaking success. And the success has steadily been taking business away from Europe’s taxis.

Wednesday’s taxi strike was fully due to Uber and other private chauffeur companies like it (VTCs–voitures de tourisme avec chauffeur) who aren’t subject to the same rules and regulations as taxis. Not only is there a limit to the number of taxi licenses available each year, these licenses can cost between €50,000 and €250,000–a price that VTC’s like Uber don’t have to pay.

Elected official Thomas Thévenoud has proposed an “open data” plan that will bring taxis up to speed technologically, allowing users to geographically pinpoint available taxis. General Secretary of the French Democratic Confederation of Labor Abdel Ghalfi says, “The Open Data system will be a national application managed by the government that will bring taxis closer to their clients.” Most taxi drivers view this plan as a step in the right direction, but want to ensure that this progress doesn’t mask the bigger problem of VTCs escaping legal fees and restrictions that apply to taxis.

The strike on Wednesday was well executed and definitely created waves, but it did have one counterproductive result: Uber’s business soared (in Paris, the company enjoyed 9 times is regular amount of business and in Barcelona, business multiplied by 12). Perhaps the taxi drivers need to find a slightly different way of voicing their opinion that doesn’t end up lining the pockets of their enemy.

Reward Comes in the Form of Paper

An apartment building in Aubervilliers, a suburb of Paris, was engulfed in flames last Saturday night. The arsonists–a 12year old boy accompanied by his 10 year old brother–admitted to setting fire to a stroller with matches. The deadly fire killed two tenants (one of whom was a pregnant woman) and seriously injured four, but the death toll would have been much higher if it hadn’t been for a Tunisian tenant named Mohssen. When he realized what was going on, Mohssen started going door-to-door to gather as many of his neighbors as he could. “I went down to the second floor and I heard my neighbors crying. I knocked on all of the doors to try to save as many as possible,” Mohssen said. Even though the hallways were pitch black and filled with panic, Mohssen became a veritable hero as he helped tenants down the fire escapes and even broke down a door of an appartment to rescue two girls who were cornered. Mohssen saved most of the building, and humbly said, “I did what I had to do.”

What makes 26 year old Mohssen’s gestures even more heroic is the fact that he is Tunisian–and doesn’t have immigration papers. Drawing attention to yourself is the kiss of death for someone without papers. But Mohssen took the risk anyway, and now it’s paying off. The prefect of Seine-Saint-Denis announced that he will study Mohssen’s file and accelerate the process of getting papers for the young Tunisian as well as other tenants “who acted with formidable bravery that night.” A very happy ending for Mohssen, who will get to start a new kind of life in exchange for saving the lives of others.

The French Court of Auditors published a concerning report on the general health of France’s DOM-TOMs (overseas departments and territories). 2.7 million inhabitants of these 13 regions are suffering horrible health conditions that citizens of mainland France don’t have to worry about: infant and maternal mortality rates are high (in 2012, DOMs saw 4.1-9.9 infant deaths per thousand births, while mainlaind France had only 3.3), chronic diseases like diabetes, and the spread of addicting behavior. The report also added, “Diseases that are rare on the mainland, like leptospirosis or rheumatic fever, have remained common in some areas of the DOMs. There are specific environmental risks, particularly chlordecone (a pesticide used in the bananeries in the Antilles) that have a strong impact on health. Moreover, economic instability further increases these populations’ vulnerability.”

An ineffective health plan for the DOM-TOMs was developed in 2009, but the health conditions in the DOM-TOMs are still horrifying compared to those of mainland France. The Court of Auditors’ report published Thursday demands the creation of a new health plan for the territories that has smaller number of more important priorities, a realistic timetable, and a practical budget. Maybe Obama will inspire a brand new line of “Sarko-care” for citizens of the French overseas territories…