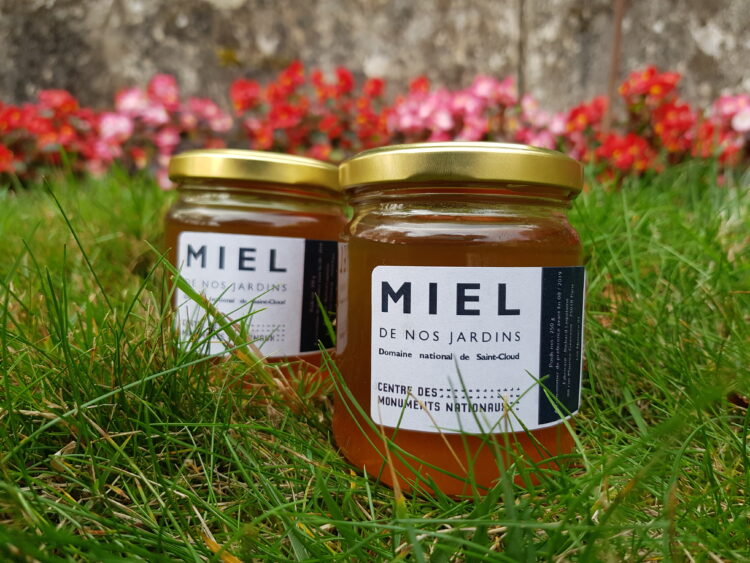 Home is Where the Honeybee Thrives: Beekeeping in France

After moving to France just over two years ago, I quickly came to realize that one of the many things I love about the place is the abundance of an incredible selection of chocolate, olive oil, and honey–three of my favorite foods. I was thrilled to discover that even my local Monoprix grocery has a larger selection of honey, much of it organic and artisanal, than any of my favorite gourmet stores in NYC. 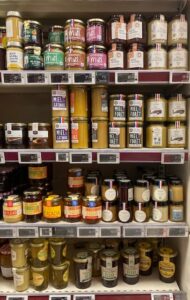 Foods that  are most commonly associated with France by Americans are fromage, vin, patisserie and baguette. But miel (honey)? Not so much.

Now that I live in Paris, I’m constantly reminded of the French love of bees and honey, which is interesting because, had I not moved here, I never would have guessed. On my daily bike ride around my neighborhood, when I cross the Parc Monceau, I pass signs among the planted gardens explaining the role of the melliferous (honey producing), and Polliniferous (pollen producing) plants. When I find myself near Les Halles, I usually take the time to pass the cool, old-fashioned beehive sculpture affixed  to the building on the corner of Rue Pierre Lescott and Rue Rambuteau.

All over Paris, clothing, fabric, housewares and linen shop windows are abuzz with bee and beehive motifs. And then there are the aforementioned bounteous  honey sections in just about every supermarket, fine food shop, and street market.

Bee products represent much more than just the coveted sweet condiment, they’re a cornerstone of French wellbeing. At least once a month, I get my honey at La Famille Mary, which boasts over one hundred different exceptional apiculture wellness products. My own daily routine includes their Elixir bien-etre (Wellness elixir), a honey-pollen mix with a touch of lemon extract.  I make sure to also keep myself stocked up on honey with propolis, an age-old French remedy for sore throats. 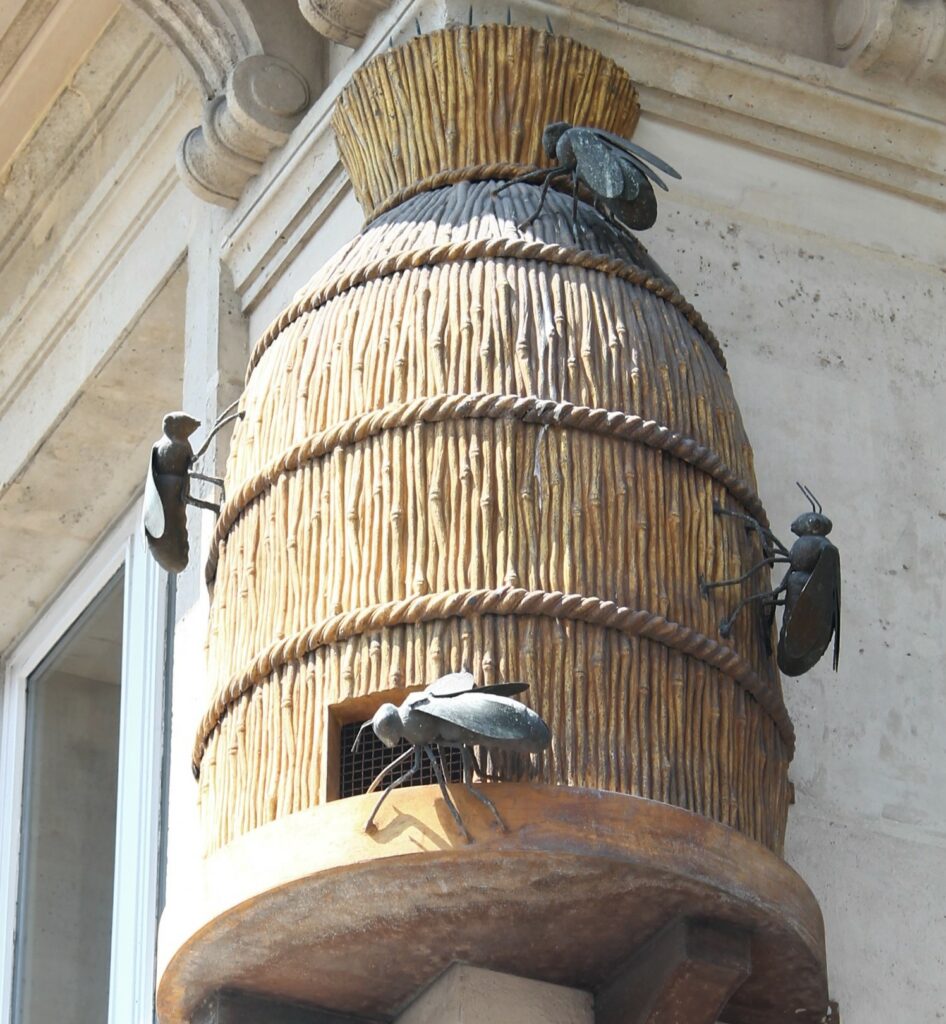 “France has one of the oldest and best managed honey industries in the world,” according to thehoneytraveler.com. The blog goes on to point out that “beekeeping by Gauls may have begun with the influence of Greeks in the late 5th and 6th Centuries B.C., or perhaps with the occupation of Rome in the 1st to 5th Centuries AD.”  Mead, honey and wax – all of which come from bees – were staples of Gaul homes.  The honey-dipped chopped and dried fruits popular in Roman Gaul could be considered a precursor to the modern day French confiserie.

Beekeeping know-how was continued through the Germanic invasions under the conquest by Clovis in the mid 5th Century. His father, Childeric the 1st, the first King of the Franks, was buried in a cloak embroidered with three hundred garnet inlaid golden bees, a symbol of immortality and resurrection, and the beginning of a long tradition of bees as royal emblems.

Childeric’s bees are believed to have inspired Napoléon Bonaparte, himself nicknamed “The Bee,” who dismissed  the lion and the cockerel in order to adopt the bee as the symbol of his royal court, used generously as a motif on imperial clothing, draperies, carpets, and furniture. He appreciated qualities associated with bees such as obedience to a ruler, organization, an orderly society, and tireless industrious diligence, all useful attributes for building a great empire.

Home is Where the Honey Is

Personal beekeeping is encouraged in France, with the Government offering generous subsidies to hobbyists and start-ups. There are over two hundred beekeeping schools, including one inside the Jardin du Luxembourg run by the Société Centrale d’Apiculture.  This affection for apiaries may be due to a wonderful combination of sustained French values of cultural heritage, the love of good food, and to the growing commitment to sustainability. As an agriculture-based economy, the French recognize that seventy-five percent of the global food supply relies on bees. The country’s sixty-eight thousand beekeepers (as of 2020), manage 1.3 million hives, two thousand of which are housed on Paris rooftops. These include renowned landmarks such as the Opera Garnier, La Monnae de Paris (The National Mint), The National Assembly, the Gare Austerlitz train station, the Musée d’Orsay , the famed Tour d’Argent restaurant, and Napoléon’s tomb, Les Invalides, among many others. It’s hoped around Paris that relatives of the one hundred and eighty thousand bees displaced by the terrible fire in the Notre Dame cathedral will return when it is reopens in 2024.

There’s been a confluence of favorable and, dare I say, rare factors for beekeeping in Paris: There’s the Mayor’s Bee Protection guidelines which outlaws the use of pesticides in any form throughout the city, the fact that the city is one to two degrees warmer than the countryside (protecting bees from the rages of winter), and, also, Paris is home to a wider variety of plant species per mile than are found in country-side beekeeping areas.   As a result, Parisian bees have a mortality rate four times lower than their country cousins. And they are over 30 times more productive. But despite this good news, the total yield of French honey dropped an alarming fifty percent in 2021, which has been attributed to climate change and invasive predatory species.

To counter the more discouraging threats facing our very essential apis allies, I was encouraged by two remarkable groups of people that I came across – a family and a government ministry – who embody a new growing breed of people tirelessly committed  to preserving and expanding honey production and bee appreciation into the future.

Chances are, if you’ve been to France you’ve visited the Notre-Dame cathedral, the Arc de Triomphe, the Panthéon, the Palais Royal, or any of the nearly one hundred historic monuments and Chateaux maintained and promoted by the Centre Nationaux des Monuments.  I first met Mme. Elodie Grilli, the organization’s dynamic Chief Tourism Development Officer, at a terrific Atout France tourism press event in NYC. When we re-met (remotely) recently, she and her team told me how they cooked up a truly inspiring program to create artisanal foods at national monuments in partnership with local producers. She said it all started with honey.

In 2015, while reviewing gift shop activity, Economic Development Director at the Centre Nationaux, Benedicte De Baritault, noticed something that started her thinking. She thought, “we have monuments with so much underutilized space – green space, gardens, forests, and fields, so we asked ourselves what else can we do to make use of it?”  She recalls suggesting, “why don’t we invite local beekeepers to set up apiaries on site to make honey and educate visitors about how honey is made, and the role of bees in the ecosystem.”  Mme. Grilli chimed in that, “the bees could be the lynchpin our green sensibility to enhance our social responsibility through the monuments.” Mme. De Baritault pointed out that “honey is a shelf stable product, easy to stock in our gift shops, travels well, making it a good souvenir for visitors.” 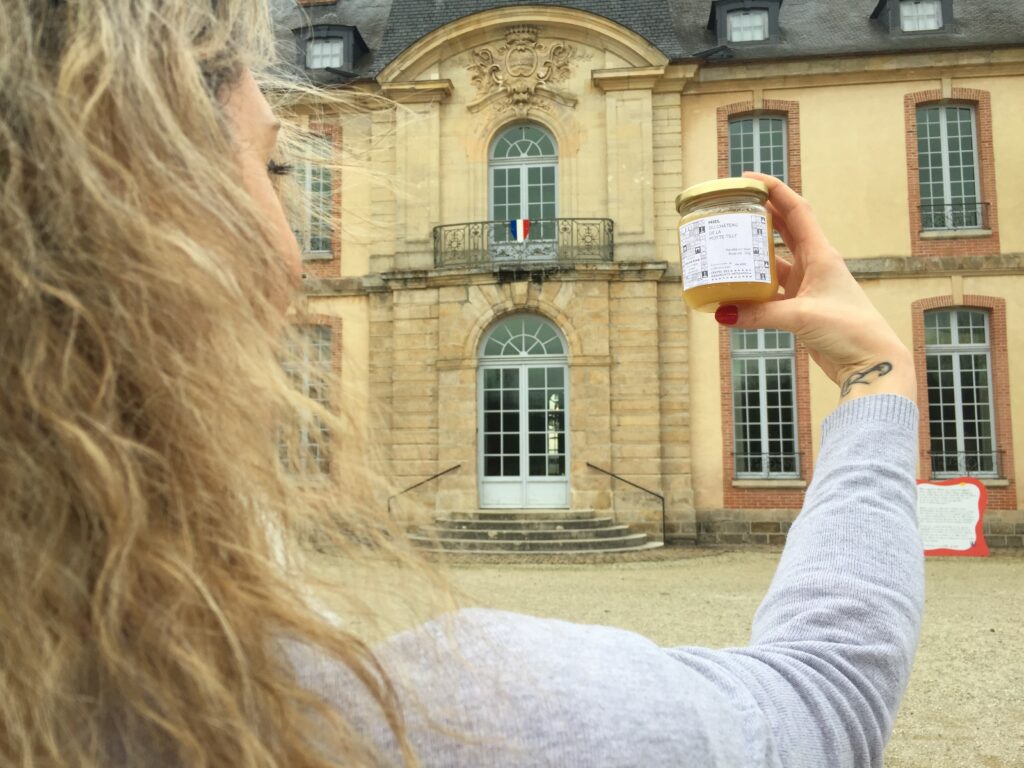 Mme. Grilli noted that, “we are really working with a living product that, like wine, reflects the local terroir, and the flavors and attributes of the honey varies from place to place.”  So, therefore, French honey could be a distinct and unique thing, something that could even be sought after. The first four active monument apiaries  around France are; Château de Ferney-Voltaire, Château de la Motte Tilly (Champagne), Château d’Azay-Le-Rideau (Loire Valley), and Château de Rambouillet. Participating monuments, she realized, could create co-branded labels with local beekeepers, promoting both local agriculture and the monuments together. It was a huge success, she said.

Based on that initial success, they began to look at what other hand-crafted foods could be produced with local artisans at the National Monuments. Now they’re testing cheese affinage in castle caves, brewing beer, and planting potagers (herb and vegetable gardens) with local chefs. Grilli’s team has come up with a perfect way to promote a unique “taste of place” (which is the very definition of Food Tourism according to the World Food Travel Association). And, as Mme. De Baritault notes, “visitors can take home a bit of the monument, and the local product which the artisans and the bees have worked on at the chateau.” 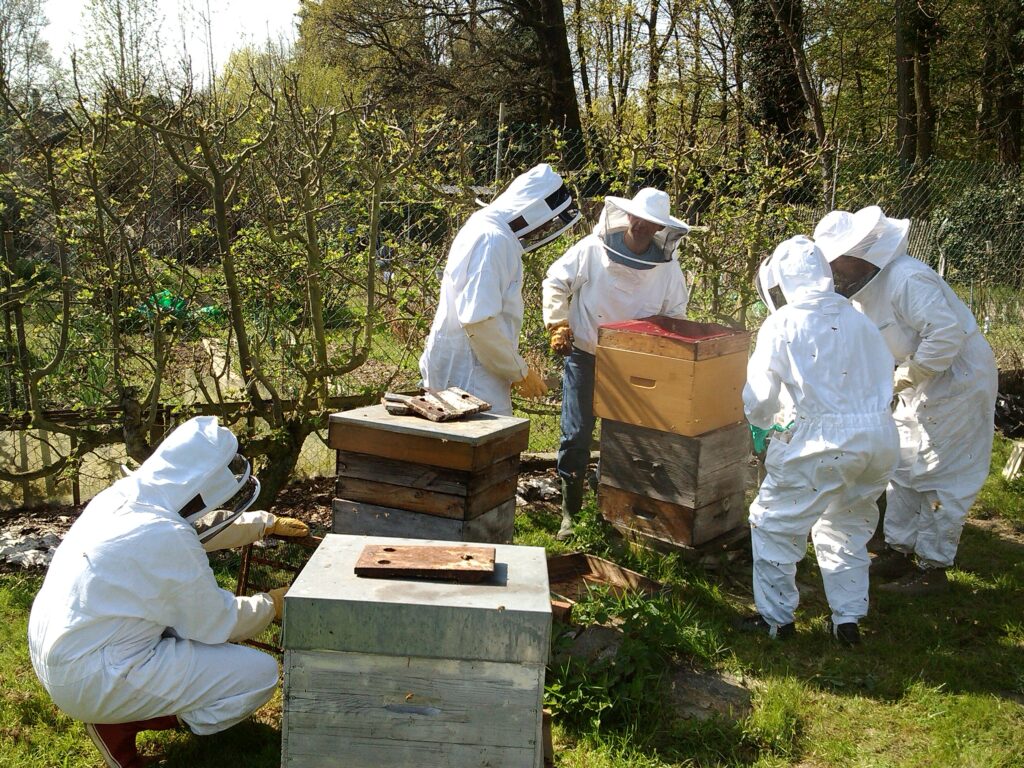 I was drawn like a bee to pollen by the exquisitely assembled booth of the family run honey business, Les Abeilles de Malescot, at the Paris Gourmet Selection food show. Manon Malescot, who left her teaching studies to turn her father’s hobby into a business, speaks about her commitment to bees, honey, and the planet with a passion that leaves no doubt about the quality and importance of their work.

“I grew up in the country on fresh local food. I picked out my eggs in the morning. So when I moved to the city for University, I was exposed to supermarket factory food, that had little taste,” she told me.  When she thought about making honey, which she learned from her father, Benjamin, a beekeeping hobbyist, she says, “I realized that I could offer a product that is clean, actually tastes like honey and offer something that is healthy for people and the bees who make it.” 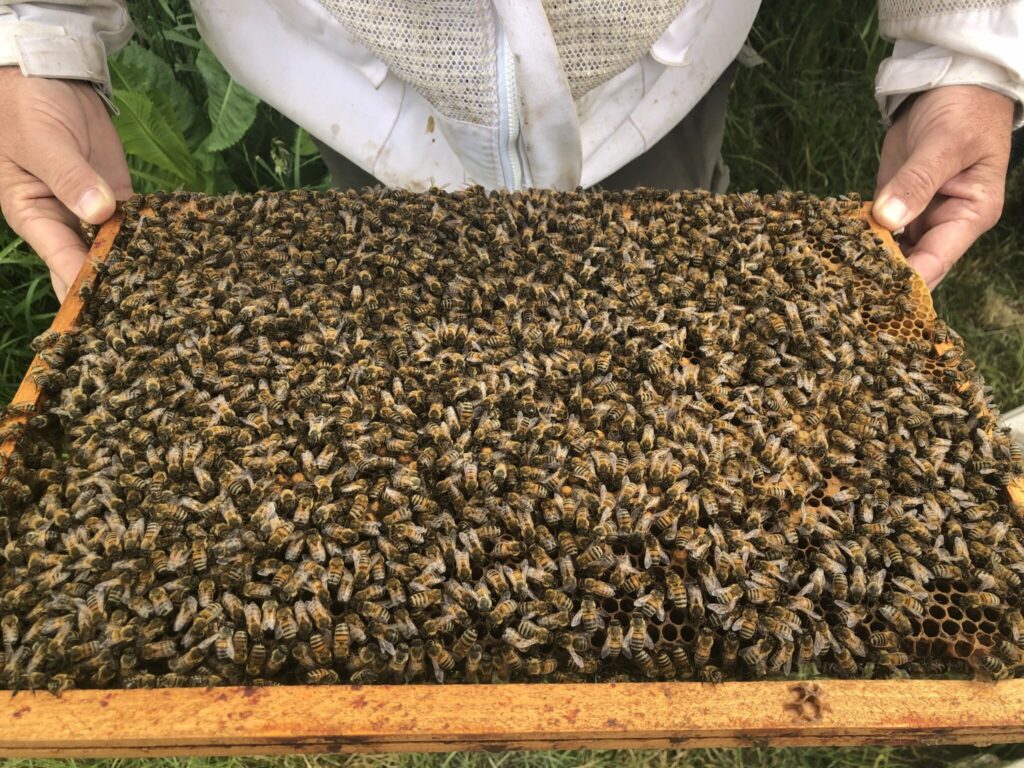 After apprenticing beekeeping in California and New Zealand, she came home to Aquitaine where she was struck by the unusually high mortality rate of bees in France. “I realized it was because the bees were moved from place to place to pollinate crops and these mobile hives don’t correspond with the bee’s natural lifecycle and cause stress, parasites and sickness.” Malescot is one of the rare apiaries committed to sedentary hives, because, as Manon explained, “when the bee works at her own rhythm, it is more humane and she decides her frequency and timing, resulting in much higher quality honey.”  With one hundred and fifty sedentary hives, the Malescots began a crowd-funding drive to develop a program to expand sedentary hive production, awareness, and training.

Manon chose to plant a wide variety of flora “bringing resources to the bees rather than moving the bees.” Her enduring focus is on creating the best habitat for the bees, but not necessarily the highest yield.  “It is so important to respect the bees,” she told me. The result is a honey and beekeeping family that has earned the highest respect through the culinary world.

Malescot exceptional honeys, and honey candy, infused teas, gifts and wellness products are available on their  website (click here) well as at select e-tail and retail in the U.S.