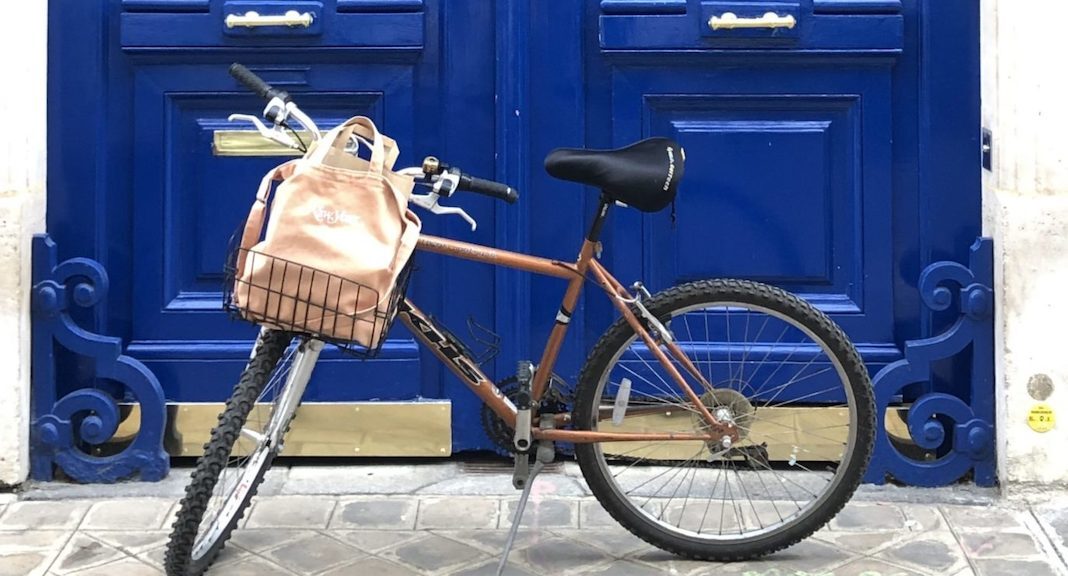 A great way to fall in love with any neighborhood or city is to bike everywhere. When I bike around the 17th arrondissement of my adopted town of Paris, I combine the experiences of exercise, discovery, people watching and, also, shopping for my next meals.  It’s a real-life VR experience brimming with history, people, art, and the sounds and smells of The City of Light. These days, it’s easy to rent a bike (check out ouibike here) to take in the city en vélo, rather than à pied.

Late afternoon, the “magic hour,” when the sun turns Parisian limestone buildings a golden ochre and it’s finally cool enough to wear a cotton scarf, is the perfect time to bike (and pick up groceries for dinner, bien sûr). 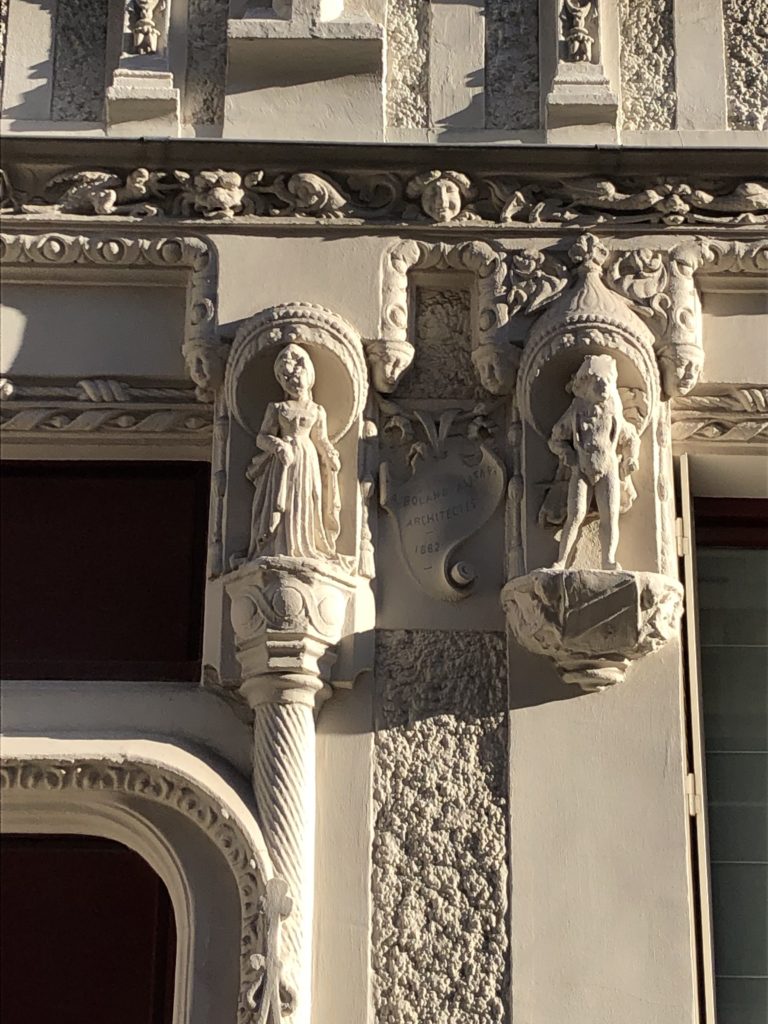 Before I traverse the four blocks from chez moi to the Rue de Prony, I pass as many bakeries. The sweet aroma of custard greets me as I pass the Les Enfants Gatés (“The Spoiled Children”) bakery. Their rows of perfectly glazed pear tartes glistening in the window in the late afternoon sun announce that I’m headed the right way down the Rue Cardinet. Just as that aroma fades, the yeasty smells emanating from the Boulangerie Parc Monceau on the corner ahead reel me in. I pull up to buy two baguettes, which I order “bien cuit” (well done) for a dark honey-colored perfect crust with a hint of a pretzel taste. With the bread in my basket, I glide up the Rue de Prony, and into the center of the city’s largest concentration of nineteenth century mansions, built in a remarkable variety of sizes and architecture. They flicker past me in slow-motion like frames in an old movie reel.

I make a left onto the Rue Fortuny, where there’s no traffic and the street is paved smooth. I pause here so that I can tear with one hand at the baguette in my front basket (the other baguette is safely tucked into my backpack like an arrow in its quiver, ready, should I need it, but best saved for dinner.)  I pause in front of Number 2, where Edmond Rostand wrote Cyrano de Bergerac. Taking another bite, I think about how cool it is that what is possibly the world’s most widely performed French play was written right here, on a street that has hardly changed since. 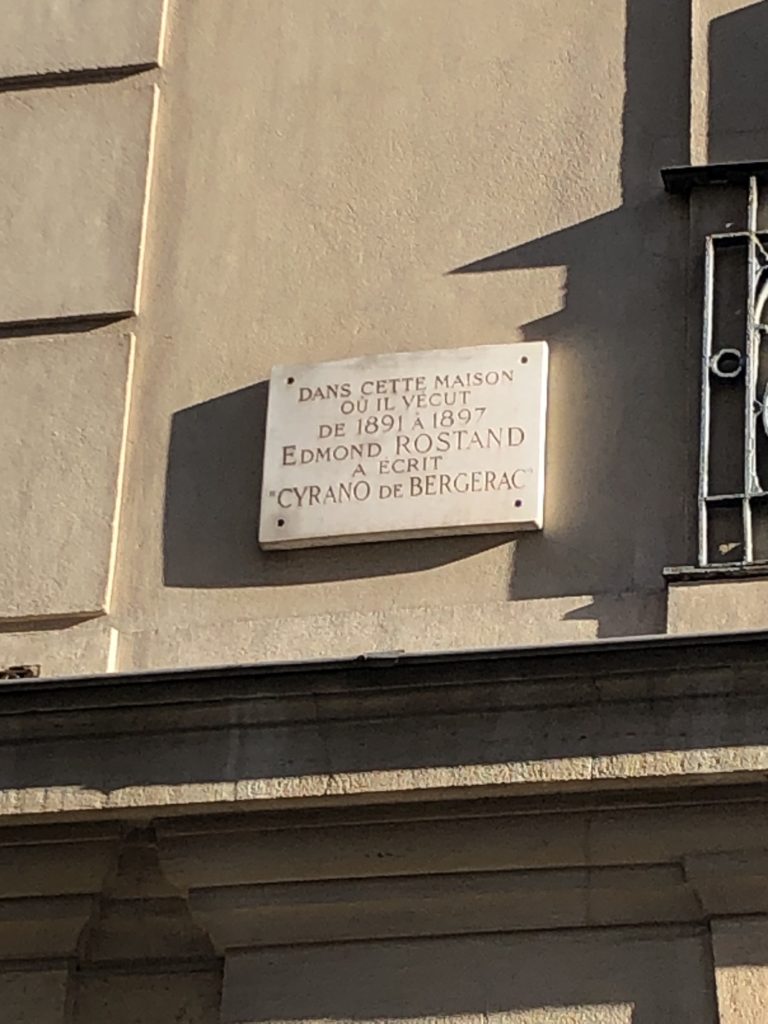 As I come up to Number 35, where Sarah Bernhardt–who was arguably the most famous actress of the 19th century–lived, I’m suddenly startled by the deafening roar of a food delivery motorcycle that thunders past me, one of the apparently limitless armada that has emerged during the pandemic. At the next corner, I make a right onto the Avenue Villiers, and take in a flock of laughing high schoolers. They must be coming from the Lycée Cornot (little has changed in its façade since it opened in 1869– notable alumni include Jacques Chirac and Jean Reno.)

Coasting up the clearly designated bike lane that now webs through over six-hundred miles of Paris, I still have to occasionally swerve into the traffic lane to avoid the delivery trucks parked in my lane. Paris mayor, Anne Hidalgo, may well realize her mission to make this the most bike-friendly city in the Europe, but drivers will need some convincing to become biker friendly.

The avenue soon opens to the Place du General Catroux and the block long neo-renaissance mansion that is now the Cité de l’Économie Museum looms into view. Slowing to a crawl on the blocked-off street, I can hear the laughter and shouts of children playing soccer and scooters echoing off the glazed brick and stone. I gaze up at the stunning spires, gold leafed dragon-headed drainpipes, and whimsical figurative reliefs. (The architect Jules Février even included a stone self-portrait of himself at a drafting table over one of the edifice’s front doorways.)  Throughout the neighborhood, the stone façades are dappled with a remarkable variety of stone faces, called Mascaron which, dating back to the sixteenth century, were meant to ward off evil spirits. 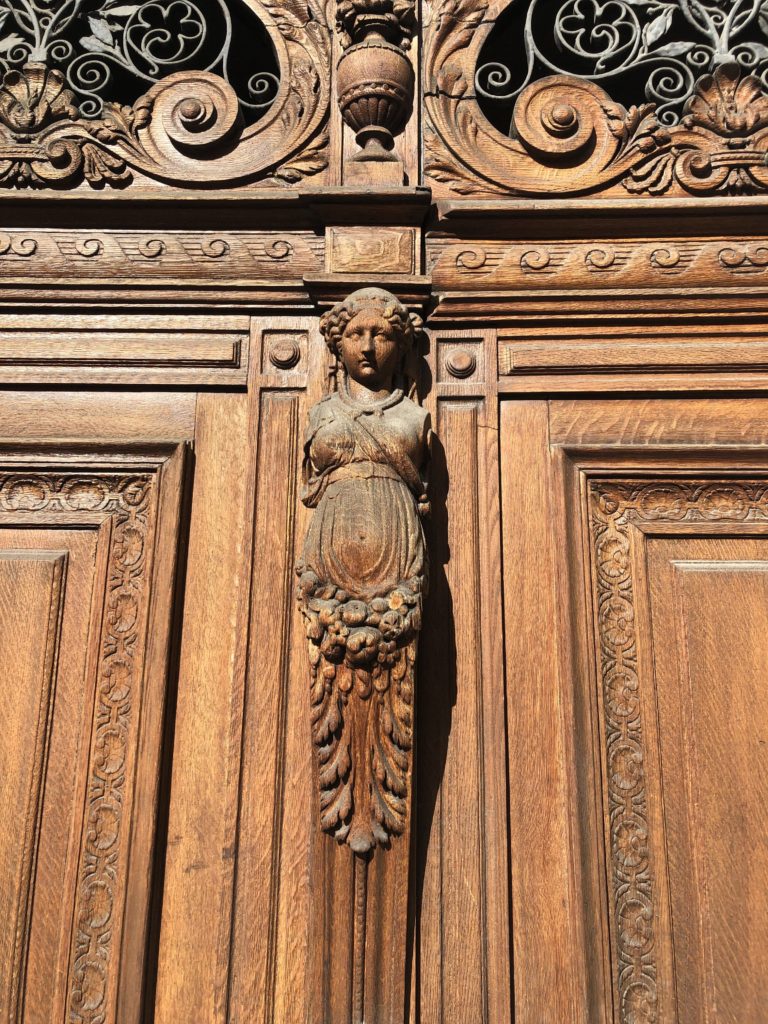 At the next corner, I make a right again onto the Rue George Berger and speed towards the blue domed rotunda and gold-crested wrought-iron gate that marks one of the entrances to the Parc Monceau. This entrance, with the Monceau Metro stop on the corner, is a central after school and work meeting spot, so there are always a few dozen people gathered, usually listening to an elegantly dressed musician playing cool Jazz on his sax.

The “no biking” rule in the park gives me a good excuse to walk across this jewel in the crown of my neighborhood which has been captured on canvas by the likes of Monet and others. Parc Monceau is indeed an old-world fantasy land, with a semi-circle of Roman-style columns at the edge of a large pond, statues, a man-made waterfall, manicured flower beds, and a miniature Egyptian Pyramid. I wait for a break in the flow of joggers where the main path crosses the footpath that circles the park.  When I get to the other side of the park, a cavalry of kids on ponies comes ambling along, their chatting grown-ups in tow. As the sun begins to fade there’s a holiday air about the lights of the merry-go-round near the park’s entrance. The scent wafting from the waffle kiosk by the carousel is mighty enticing. But the long line of eager kids and parents helps me make my decision to push on. 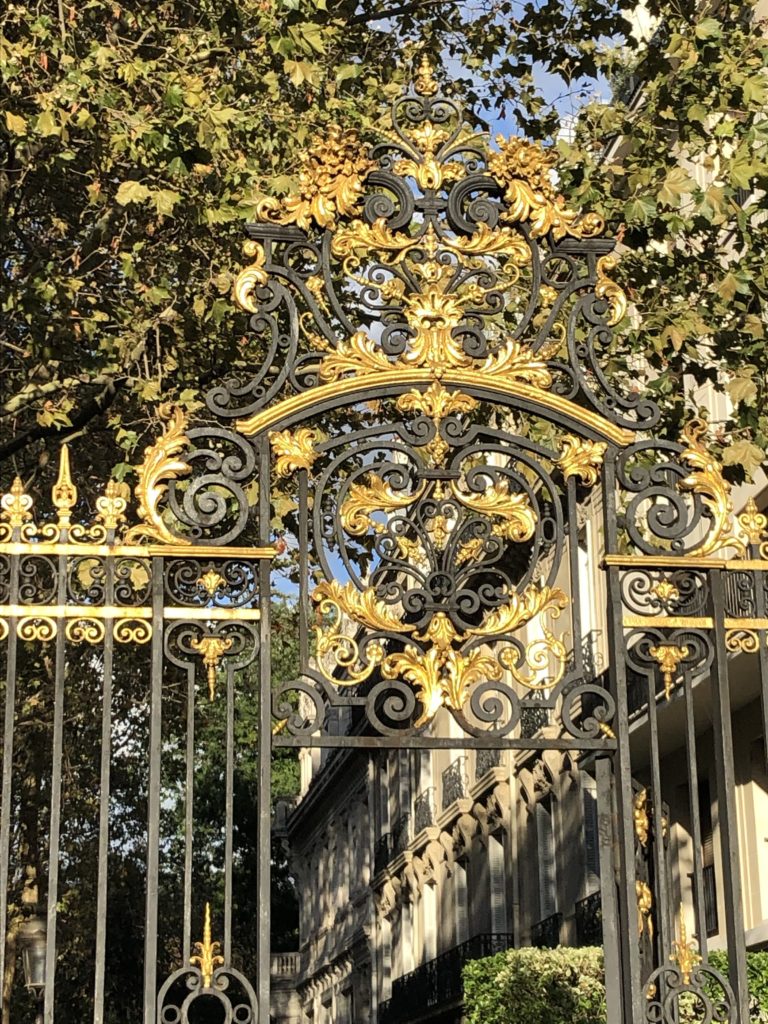 Passing through another imposing gate onto the Place Rio de Janeiro, I cross the street and pass through the satisfied hubbub of dark-suited office workers enjoying after-work drinks and eats on the terrace of the classic zinc bar brasserie, Le Valois.  I like the vibe there; it reminds me of meeting colleagues after work when I used to live in Manhattan. I’m often tempted to stop in for their cheeseburger (one of the best I’ve tasted in Paris) but remind myself of my grocery mission. And so, I continue on, coasting down the Avenue de Messine, my glasses rattling on my nose as I stand on the pedals to absorb the b-b-b-bounce on the cobble stones, and head to my favorite Italian traiteur, La Mia, on the charming Rue Corvetto for unbeatable Eggplant Parmesan to-go. I order and chat about what’s new with Giulia and Andrea, the young couple who own it. 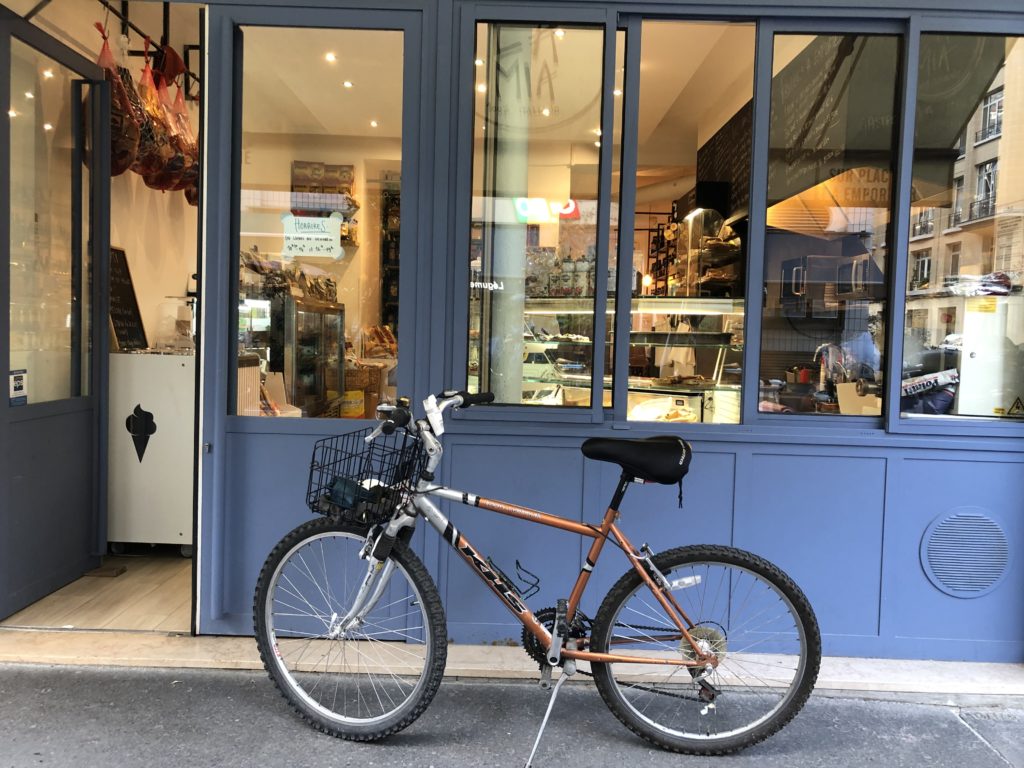 Dinner in a box, I walk my bike next door to La Rôtisserie Parfumée where everything on their daily rotating menu is so tempting it’s difficult to choose. But I settle on a towering slice of Quiche Lorraine. As luck would have it, today they have Tarte aux Pommes Façon Grand-Mère (Grandma-style Apple Pie). I pick one up and head a few doors further down to the Fromagerie to pick up some aged sheep’s milk cheese.

With my basket brimming with goodies, I make a two-block detour to the mansion of the Impressionist master, Caillebotte, on the corner of the Rue Lisbonne and the Rue Miromesnil.

Capturing these Parisian buildings with intricate wrought-iron balconies and the wide avenues of this neighborhood were signature themes of Caillebotte. From there, I backtrack, this time circumventing the park to pass the incongruous Chinese Pagoda mansion on the corner of the Rue de Courcelles, and I take the main drag all the way home.

For me, few things rival this ride that has taken me through two-hundred-and-forty years of architecture in forty minutes. It’s exhilarating, beats away any blues, and I can’t wait to do it again tomorrow.

But now it’s time to turn my attention to le dîner.

Philip Ruskin is an External Lecturer (ESSEC Bus. School), Consultant (food & travel marketing), writer and drummer. He loves to bike around his adopted hometown of Paris. On Instagram