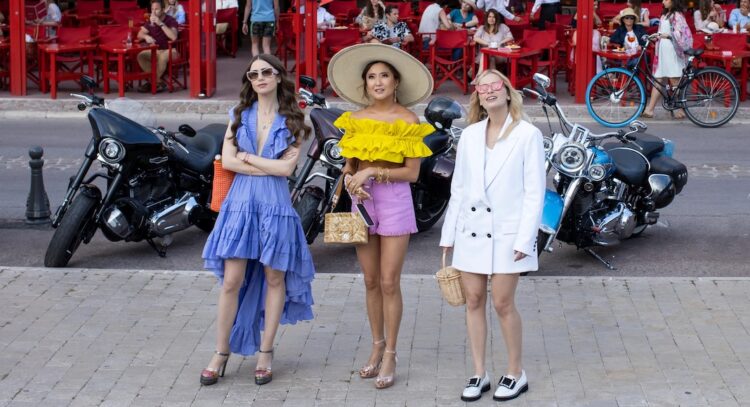 Did ‘Emily in Paris’ Season 2 Learn From Any of Its Past Mistakes?

Netflix’s Frenglish sitcom, Emily in Paris, was last year’s surprise “love to hate it” hit. The show, an update on the American in Paris trope starring Lily Collins, became Netflix’s most-streamed comedy series of 2020, despite near universal derision. Critics complained about the show’s wildly unrealistic portrayal of the expat experience, influencer culture, the French, and pretty much everything else. Not to mention the outlandish fashion choices, chosen by designer Marylin Fitoussi and consulted on by legendary Sex and the City costume designer Patricia Field. Created by Darren Star, best known as the creator behind Sex and the City, Emily had some tall shoes to fill in order to bear the weight of its big name production team.

On December 22, Netflix released season 2 of Emily in Paris, with many viewers either praying for the story to get a much-needed reality check, or giddily awaiting more of the same whimsical balderdash.

So, let’s recap before we dive in. In season 1, Emily moves from Chicago to Paris to work at a French marketing firm recently acquired by her American company. She’s unable to so much as ask for the bathroom in French, let alone handle the nuanced cultural sensitivities of her luxury French clients, and is understandably hated by just about everyone at her new company. Somehow, inexplicably, she becomes an accidental social media influencer, despite not knowing how to take a selfie or use a hashtag correctly. She befriends a Shanghainese zipper heiress named Mindy playing house as a French nanny/cabaret singer (played by Broadway actress Ashley Park), and a French champagne heiress named Camille playing house as an art gallerist. She then falls for (and eventually sleeps with) the hot chef downstairs, Gabriel, who happens to be the boyfriend of the art gallerist. Melodrama ensues, and the season ends with Emily in a twisted knot of her own making.

The Gabriel of it all

Season 2 begins with Emily trying to worm her way out of the complicated mess of affairs she’s dragged herself into. As usual, she fails upwards, into a hotel suite at the Grand-Hotel du Cap-Ferrat in Saint-Tropez. Because don’t wealthy fashion house heirs always leave you a parting gift of a five star vacation when they find out you’re in love with someone else? (Also, why is everyone on this show a wealthy heir to something? Except for Emily, whose only birthright is deep dish pizza.)

Regarding her @emilyinparis Instagram account, we must unfortunately admit that this Boomer idea of what a social media influencer is has not gotten any better. Emily continues to take photos that lack the most basic levels of organization and technique (like one of Gabriel in which the top of his head is not even in frame). It is mentioned that Sylvie, her boss, used to be a photographer, and while Sylvie seemingly has little interest in social media, you would think that she might give Emily the smallest bit of feedback on this content clients are paying top dollar for. Emily’s hashtags continue to make no sense (#huithuitres). Finally, we must beg the question: who still takes this many selfies?

Emily’s continued nonsensical “marketing strategy” is enough to make you slam your head against a wall. In addition to the fact that a 12-year-old on VSCO could make more aesthetically-pleasing content, she lets a random celebrity post about an unapproved potential collaboration without clearing it with anyone at her office… a totally normal thing that would definitely *not* get a real person fired on the spot.

(If you’re looking for some proper French influencer or expat Instagrammer content, we’ve got a few lists to cleanse Emily’s cringe-worthy posts from your headspace.)

In general, Emily’s work makes no sense. Everyone in her office seems to run around making decisions without consulting literally anyone else, and all of her big successes seem to revolve around getting her friends to do free labor for her. She demands that Mindy’s band play an event while implying that they don’t need to pay her, and later gets Gabriel to bake 80 cakes for a fashion show with less than 24 hours notice. Because apparently money doesn’t exist in this show, and neither does the concept of being taken advantage of by your friend with a supposedly “huge marketing budget” who’s still operating on an “it’ll be great exposure” wavelength.

Who’s gonna tell her about the AC?

Much of Season 1’s “humor” made Emily’s language mistakes or cultural misconceptions the punchlines. These jokes often felt like little lessons inserted to teach viewers about French culture, like Emily using the word “préservatif” instead of “confiture,” or confusing the ground floor with the first floor. These bits tended to drag or feel hammered in, but thankfully seem to have been toned down in Season 2. For example, bits like Emily struggling to drive stick shift in an emergency, or discovering that the French don’t believe in air conditioning, feel like things an American living abroad would realistically be infuriated by. Though you’d be surprised how many times they feel compelled to bring up the fact that it’s illegal to work in France on the weekends.

One of the best things Netflix decided to do with Season 2 was to have Emily step aside to make way for spectacular performances from two of the cast’s fabulous French actresses: Philippine Leroy-Beaulieu and Camille Razat. Leroy-Beaulieu plays Emily’s boss, Sylvie, a cunning French vixen of a certain age who takes pleasure in cutting Emily down at every opportunity. Season 2 Sylvie is a divine portrayal of a complex, worldly woman who fights fire with fire, and lives life on her own terms.

Camille Razat plays Camille, Emily’s art gallerist friend whose boyfriend she sleeps with at the end of Season 1. After being slighted by her hot chef boyfriend Gabriel, who is secretly in love with Emily, the sunny, charming Camille becomes icy and vicious. She plays both sides to get what she wants, channeling an arresting duplicity as she plots to tear Emily down.

The return of ‘le bucket hat’

The costume design also seems to have found its footing in Season 2. Patricia Field (who consults on the show) is famous for designing the aesthetic of Carrie Bradshaw, which always veered between fashion-forward and delightfully wacky. Emily feels like a current stand-in for Carrie, skipping across cobblestones in thousand dollar heels that, many have pointed out, would be far out of her budget as an entry-level marketing assistant. In Season 2, she gets a few standout pieces, like a pink bow birthday dress, a ruffled high-low periwinkle beach dress, and a red Giambattista Valli for H&M gown (which feels like the quintessential Emily high-low collab dream)… all of which are, unfortunately, overshadowed by the triumphant return of the bucket hat.

If you’re willing to get past Emily’s general costume insanity (including, of all things, striped cinched gauchos paired with a cardigan with pink fur trim), you’ll notice that the other characters get their own distinct, stunning aesthetics. Camille, once a ray of sunshine in white and cream in Season 1, takes on a cold, Hitchcock blonde noir aesthetic, in stunning black and white creations. Sylvie again displays bold Parisian elegance in a mauve coat slung effortlessly across her shoulders, or a gold snake armband and flowy forest green dress. Meanwhile, Mindy leans far into her new “drag” persona, in full bedazzled Victor Victoria glam.

The other kind of expat

Emily’s romanticization of Paris does get an unexpected foil in the form of Alfie, a sexy (but rude) British banker determined to hate Paris and everything it stands for. The two meet in French class, and while Emily is trying her hardest (well, at least according to her), Alfie couldn’t be bothered. He’s here for work, thinks Paris is an overrated tourist trap, and wouldn’t order a coffee in French if you held him at gunpoint at the Cafe de Flore. Emily becomes determined to convince him that Paris is truly the City of Love, and the two go from enemies to lovers in the time it takes to say, “Parlez-vous Anglais?” Despite the fact that Alfie has no personality outside of liking beer and soccer, Emily falls for him, probably because he’s hot, British, and has air conditioning.

Alfie does serve one crucial purpose, however: justifying Emily’s romanticization of Paris. By coming off as a xenophobic, narrow-minded person with no interest in learning about the world outside his small, boring bubble, Alfie makes Emily seem like someone who is at least trying to appreciate and learn from her new surroundings. All of this builds up to Emily being asked to make a big decision at the end of the season: to return to Chicago, or stay in Paris permanently. It’s a turning point all expats must make at some point. For every American college student who spends a semester in Paris, very few actually stick around for the real work of integrating into society. It’s a tough call, a line in the sand between fantasy and reality. Or, as Mindy puts it: “This isn’t just a fun year abroad anymore. This is your life.”