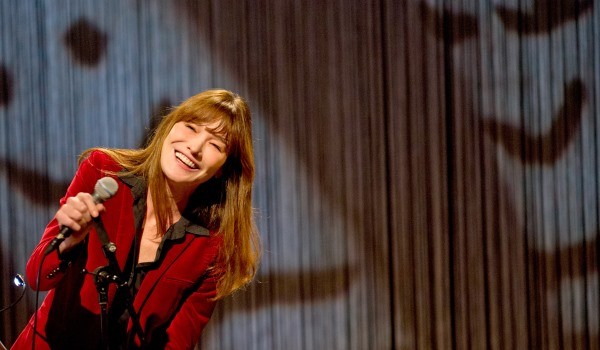 Carla Bruni-Sarkozy, who most recently appeared on world stages in her official capacity as First Lady of France, is taking her music back on the road. The model-turned-singer-turned-First-Lady is touring North America to promote her latest album, Little French Songs, appearances in Montreal, Los Angeles and, of course, New York.

Bruni-Sarkozy is perhaps best known for her hit album Quelqu’un m’a dit, which sold 2 million copies in 2003, a collection of folky, poppy, “chanson”-style songs in her simple, light and graceful voice. Little French Songs is her fourth album since then, but Bruni-Sarkozy has been taking a break from performing ever since her marriage to then-French-President Nicolas Sarkozy in 2008.

Now that it’s back to business as usual (or as usual as business can be for a rock star) Bruni-Sarkozy is happy to be in her element again, though with dates in France, Belgium Switzeralnd, and Barcelona, back-to-back rehearsals and jet lag, fatigue can set in quickly. “It’s tiring — we rehearse when other people are eating lunch or dinner. But it’s so wonderful!” she told French Morning.

Besides her music, Bruni-Sarkozy also pends time running her charity dedicated to offering financial assistance to French and American youth wishing to study the arts across the Atlantic. “When I’m not singing, I’m sleeping. I rest and take care of my children. I’m so happy to come to the US but for me, it’s just a parentheses.” Originally, Bruni-Sarkozy’s tour included dates in San Francisco, Washington and Québec, but several dates were canceled to allow for rest between plane trips. “They offered me a lot of dates and to perform concerts right upon arrival. Maybe there are people who can do that but when I fly six hours I can’t fly right when I land.”

Carla Bruni-Sarkozy is no stranger to New York, calling it the “city of her youth” where she lived when she was a model. In 2009 she also took a rare break from her performance hiatus to sing at Nelson Mandela’s 91st birthday party at Radio City Music Hall. Los Angeles, though, will be a first, and the seasoned artist confesses to a bit of nervousness. “It’s called stage fright. I don’t know many performers who don’t get it.”

Even though her songs aren’t very well known in the US, Bruni-Sarkozy relishes the opportunity to perform states-side. “What I’m interested in is giving as many people as possible the opportunity to hear my music. I don’t have any expectiations in terms of sales — never, especially in a market like the United States that doesn’t really go for French songs,” she says. “I’m not looking to be in the hit parade, that’s for sure!”

Besides her concerts, Bruni-Sarkozy will appear on The Ellen DeGeneres Show, where — she’s been forewarned — she could be asked to get a little silly. When Michelle Obama visited the hugely popular talk show, she was made to do push-ups on stage. “I hope it will go well,” says Bruni-Sarkozy.

Though Bruni-Sarkozy seems generally as easy-going as her music, there are some subjects she’d rather not discuss. When asked about her husband’s current struggle with scandal in the media, the former First Lady doesn’t hesitate to shut down the conversation. “If you want to interrogate my husband, ask him for an interview,” she says. Although there are no plans for Sarkozy to join his wife on tour, he will be there in spirit: one of her songs “Mon Raymond” is dedicated to the former French President.