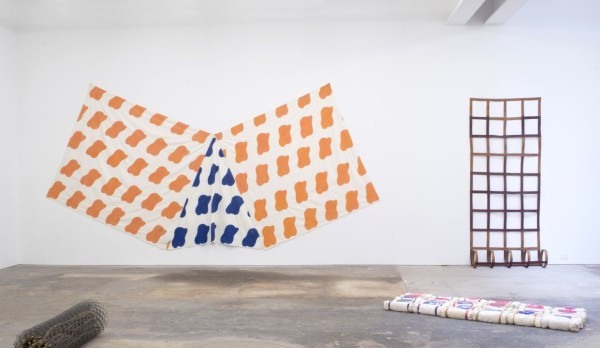 “It’s really fascinating that there’s so little attention paid to French post-modern art,” remarks Canada Gallery’s artist Wallace Whitney. “I’m an artist and I can probably name 10 German post-modern artists who are their contemporaries, but I had no idea these guys even existed until four years ago.”

Less dour and puritanical than the Paris-based BMPT movement in the mid 1960s, Whitney describes the artists in the Supports/Surfaces movement (lasting from the mid 1960s to the mid-to-late 1970s) as “Marxist painters, but also hippies.” Philosophers like Roland Barthes and Louis Althusser greatly influenced these Marxist painters, many of whom were veterans of the Algerian war ending in 1962 and were therefore rather alienated by French society. Hailing from cities in southern France like Nîmes, Nice, Marseille, and Saint-Étienne, the artists adopted a nomadic style of artistic expression, traveling throughout the south and showing their art in informal settings like bars and alleyways. Therefore, most of the pieces of art are easily transportable from place to place: pieces of unstretched canvas that can be folded or rolled, a net made from knotted rope, or a dishtowel painted with a dotted design.

“This is a good example of one you would have seen outside just leaning against a wall of a building,” says Whitney, pointing to Patrick Saytour’s piece Déployé (in English, Deployed), a long rectangle of pink fabric held up against a wall by white plastic posts. It was the informal and nomadic style of the Supports/Surfaces movement that evoked a sense of impermanence and transience.

Canada Gallery’s Supports/Surfaces exhibition maintains the integrity of this informal, nomadic style. The exhibition is transient (lasting only until July 20th) and informal (the pieces are highlighted in two large, open rooms with simple white concrete floors and walls). Although different pieces from the Supports/Surfaces movement have been shown previously in various locations in the United States, this exhibition is the first to pull them all together–somewhere around 45 years after the movement’s peak–and present a comprehensive exhibition that features 11 different Supports/Surfaces artists: André-Pierre Arnal, Pierre Buraglio, Louis Cane, Mark Devade, Daniel Dezeuze, Noël Dolla, Jean-Michel Meurice, Bernard Pagés, Jean-Pierre Pincemin, Patrick Saytour, and Claude Viallat. These artists were fascinated by process and materiality, and they often drew inspiration from Matisse’s use of vibrant color and collage style when creating new ways to make paintings. Rope, colored sheets of plastic, newspaper, dishtowels, sheets, and drawer linings are all part of the artwork on display at Canada Gallery’s Supports/Surfaces exhibition.

“There’s a critical resurgence and interest in this work right now,” Whitney says, “and there is a lot of interesting overlap here with what I see in other Lower East Side and Bushwick galleries.” Of course there is no question that earlier modern French artists are celebrated for their work–Manet, Cézanne, Monet, Gauguin, Toulouse-Lautrec, and Matisse (ranging from 1832 to 1954) are all well known names. But Whitney explains that later French post-modern art is generally under-recognized. “There’s a famous myth that the capital of the art world shifted from Paris to New York after World War II, since many of the artists were refugees. There’s still an artistic rivalry between the two cities today.” But even though New York has pulled a bit ahead of Paris as the art capital of the world, Canada Gallery’s Supports/Surfaces exhibition demands that the art community begins to appreciate French post-modern art. “The Supports/Surfaces movement is a bit forgotten and passé in France” says Whitney, “but what they did was really valuable and groundbreaking. They took a lot of artistic chances and influenced a lot of people.”

The Canada Gallery is open Wednesday through Sunday from 11 am until 6 pm, and the Supports/Surfaces exhibition will continue through July 20th. Several of the pieces are on sale (price points around $60,000 and $100,000). Canada Gallery has also co-published a book with Galerie Bernard Ceysson about the Supports/Surfaces movement for the occasion of the exhibition, featuring photos and writing about the movement’s art.