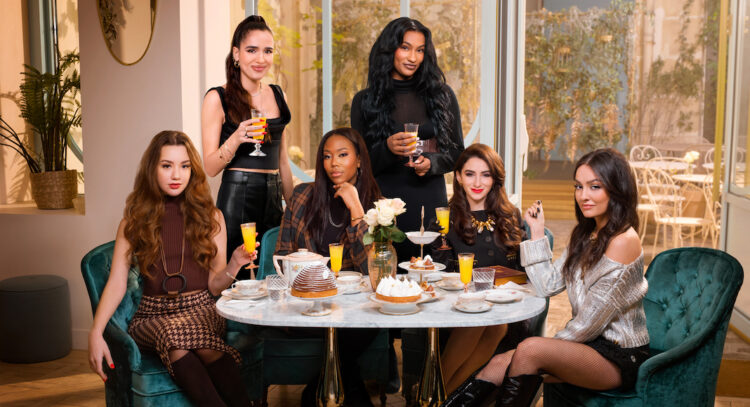 I don’t like reality TV. The over-filled, over-glossed lips, the melodramatic flash cuts soundtracked by campy sound effects, the uncanny valley of naming arguably the least-authentic genre of media, “reality.”

But once in a while, a show will come along that will prompt me to tentatively set down my snobbery and resist the urge to switch channels. The most recent is Bravo’s Real Girlfriends in Paris, a reality show about six young American women living as expats in Paris. There’s Adja, a digital nomad working East Coast hours during French happy hour. Kacey, an English teacher with a questionable visa status. Anya, a personal Louvre tour guide who makes €500 a pop and throws extravagant low-carb dinner parties. Emily, an interior design student. Victoria, a fashion professional. And finally, Margaux, a louche French-American trustfunder adjusting to the recent loss of her $10K/month allowance.

The girls present a mix of the best and worst of the Parisian expat experience. They’re fabulous, funny, and dedicated to living their best lives. But they can also be sloppy, entitled, or just plain desperate. Anya, 32, is a born-and-raised New Yorker and ten-year Paris resident, the group’s unofficial maman and the only American alive who could get away with wearing stilettos with gold croissant pendants on them to the grocery store. “I can’t wait to be a Parisian woman like that one day,” says Emily, the bébé of the friend group, about Anya.

It would be easy to laugh at these women and call them unrealistic, but they hold true to an oft-overlooked tenet of the expat experience: that those who are determined to live a certain way will find a means to do it. No one winds up glamorous by accident—it’s a decision you make every day. And no one exemplifies this as much as Anya, whose carefully curated lifestyle both on and offline speaks to an unrivaled dedication to fabulosity and la vie romantique. (Complete with a French fiancé she met on a solo jaunt to Bar Hemingway, in a made-for-TV meet-cute  straight out of an Elaine Dundy novel.)

If Anya represents the culminating result of Parisianization, and Emily the wide-eyed Gershwin ingenue, then some of the other girls represent the messier side of cultural adjustment. “Dating in Paris is hard, we’re not all falling in love in front of the f— Eiffel Tower,” complains Margaux, who poses comedically for her confessional cam in front of an Eiffel Tower backdrop, in a Patricia Field-approved pink feathered dress. Kacey expresses similar discontent with her love life, getting humiliatingly stood up by a handball player at his own after-party in the second episode, before going home to wallow and drink wine in a filth-strewn apartment.

Some moments of the show manage to toe the line between tacky and hilarious, as the girls find adorably gauche ways to celebrate the things they miss about their home country. “You really never appreciate these things until you move here,” says Victoria in the first episode, after Adja reveals that she has brought her own bottle of ranch to the pub so the girls can dip their mozzarella sticks in it.

It’s a show about chosen family and reinvention, with a pilot that ends, of course, in a quirky and drama-filled expat Thanksgiving. It feels like a perfect combination of the Paris episodes of Sex and the City and Gossip Girl, the best parts of Emily in Paris, and even a dash of Mrs. Maisel (which has a second season Paris episode of its own). With a key difference—a nod, even if a perfunctory one, towards diversity. The show’s creators seem very aware of the backlash these other shows have received for their whitewashed, heteronormative versions of Paris, and have decided to remedy the situation by including two black girls (Adja and Kacey), and one bisexual girl (Victoria). It’s a smart move, and a necessary one to balance out the straight, white, privileged energy that Emily, Anya, and Margaux bring to the table.

Real Girlfriends in Paris isn’t groundbreaking television, and it falls victim to plenty of tropes of the genre: privilege, superficiality, vocal fry. It’s not trying to right the wrongs of generations of films and television shows using Paris as a hollow backdrop for performative self-discovery or semi-consensual seduction. But it is sassy and entertaining, brunch in a beret. And we’ll take this Emily over the other one any day.