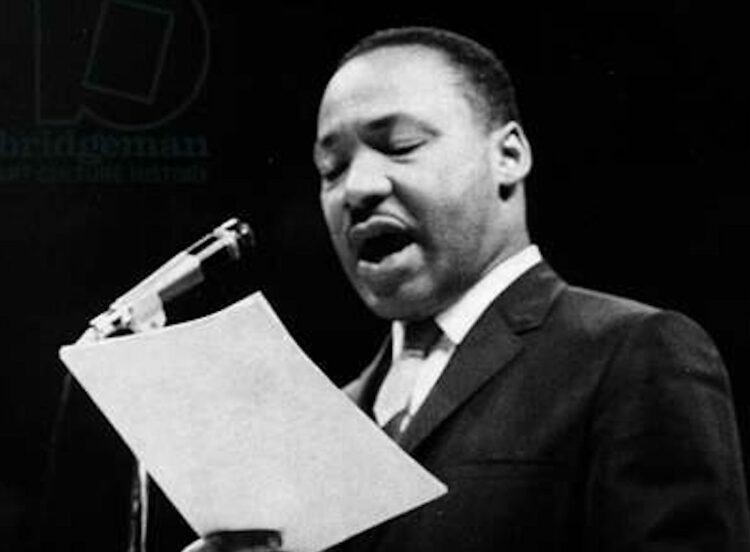 In 1965, the Reverend Martin Luther King, Jr., went to Paris and gave a sermon on Sunday, October the 24th at the American Church in Paris, located at 65 Quai d’Orsay in the 7th arrondissement. This was two years after his famous “I Have a Dream Speech,” one year after he received the Nobel Peace Prize in Oslo, Norway, and a few of months before he came back to France to speak in Lyon. According to the American Church website, King had been invited to speak “by the French Protestant Federation… at the Maison de la Mutualité, on ‘L’Eglise dans un monde en revolution’ ” or, “The Role of the Church in a Revolution.” Unfortunately, there is no recording or transcript of the sermon he gave that Sunday, October 24th, though this blog suggests that the title was “The New Jerusalem.” But a man named Nicolas de Chezelles was there and told the American Church in Paris’ Spire magazine that, “There was so much emotion. It was an honor to be here.” He estimates that at least 750 people packed into the 550 seat church, and that more spilled out onto the sidewalk and street. He said that he remembers the speech as full “words of hope, of expectations. For a young man of 17, you are building your expectations. I was so moved by being near that man,” but that he can’t remember the exact words King used. 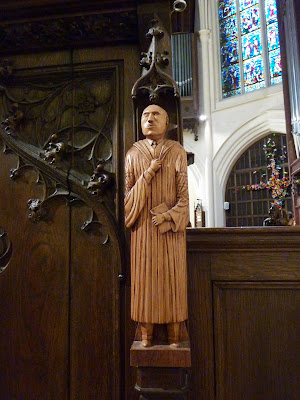 Even though no document of the speech survives, to honor this historic moment at the American Church, the pulpit “is decorated with six carvings by Richard Wessel, a former member of the church, dedicated in June 1984. Handcrafted from basswood, the figures represent six great preachers and reformers. From left to right: Pope John XXIII, John Wesley, St. Paul, Martin Luther, John Calvin and Martin Luther King, Jr.”

According to the blog, Entrée to Black Paris, King’s speech that October morning was, as de Chezelles remembers, packed to overflowing and well received. The blog also explains that on the next day King spoke at the Maison de la Mutualité on ” ‘a Christian movement in a revolutionary age.’ He spoke in English to a full house and his words were translated into French by pastor Robert Somerville. He was repeatedly interrupted by applause and was given an ovation at the end of his speech. Afterward, he met with the press for interviews in a small room at the conference venue. A few days later, Dr. King wrote a letter to Pastor Somerville to thank him for that ‘extremely accurate translation’ of his speech.”

Entrée to Black Paris goes on to elucidate that  King’s visit was packed with meetings and meaning: “Dr. King spent time with French and foreign pastors from across Paris at the Eglise Reformée de l’Annociation in the 16th arrondissement. He was also interviewed by the FPF for a television show called Présence Protestante (Protestant Presence). During the interview, Dr. King responded to questions about the practicality of non-violence as a strategy against racial oppression, how he thought his movement would succeed in the north compared to the southern U.S., how the French population could become involved in his struggle, and what Jesus Christ represented to him personally. In his response to the third question, he indicated that French people could lend their support by writing letters to the U.S. government and making financial contributions to the Southern Christian Leadership Conference. The interview was televised on November 7, 1965. The September 2015 edition of the ACP newsletter, Spire, reports that the FPF collected and donated 6,125 francs to the Southern Christian Leadership Conference.”

In March of 1966, King came back to France and spoke in Lyon. According to St. Louis Public Radio, “There, he reflected on racial discrimination in the United States, thanked France for its financial support of anti-discrimination efforts and discussed working toward a unified world.”

Two and a half years later, King delivered his seminal speech on the illegality of the War in Vietnam at Riverside Church on the Upper West Side of Manhattan, which was presided over by William Sloane Coffin. King said at that time that he had to speak out because, “my conscience leaves me no other choice.”  A year later, King gave his moving and courageous “I’ve Been to the Mountaintop” speech in Memphis, Tennessee. In that speech he indicated that he knew he would be killed for his leadership of a revolution that was now well underway, and had attained global attention. The next day he was assassinated. He was 39 years old.

In 2001, a park in Paris  was named after Dr. Martin Luther King, Jr. as a tribute. Today schools, squares and more all across France are named for the heroic American leader, who preached acceptance and nonviolence, and who began a revolution of social justice that continues in his name to this day  all over the world.

Caitlin Shetterly is the Editor-in-Chief of Frenchly. She is also the author of 4 books: Fault Lines, Made for You and Me, Modified and the upcoming novel, Pete and Alice in Maine, which will be published in 2023 by Harper. She is a native daughter and she lives with her two sons and husband in an old house on the coast of Maine.