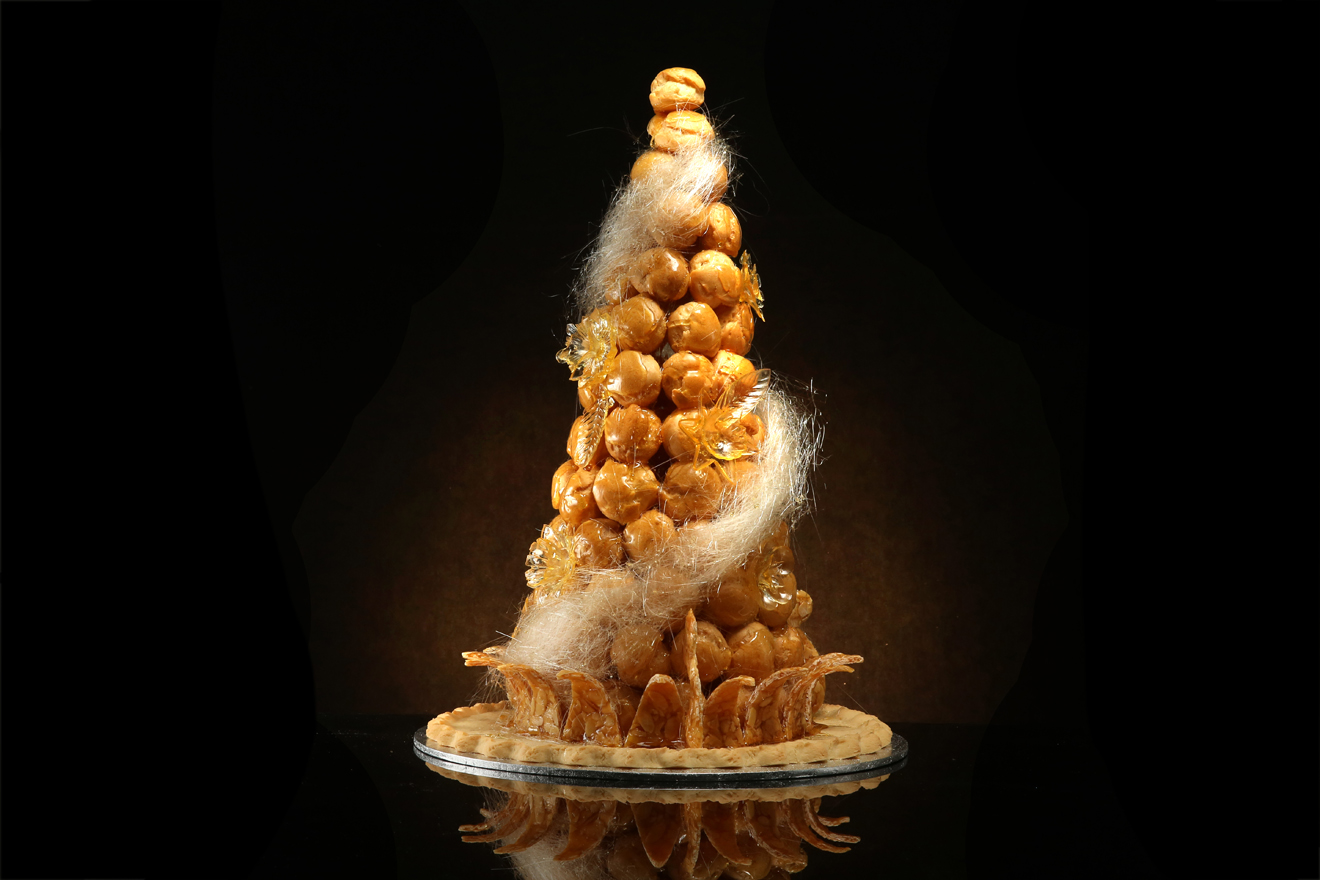 As Summer turns to Fall, the wedding season in France is just beginning to wane. All throughout June, July, August and September, couples plan, stress about the weather, and party until dawn.

Weddings in France are a true social gathering with their own special rules, like who gets invited to the cocktail only or who gets the special invite to dinner. Tempting as it may be to get into the finer details of wedding planning in France versus the United States, our focus today rests solely on one of the greatest photo ops of the night: le gateau.

Traditional wedding cakes in France share one mighty characteristic with their American counterparts: the higher, the better. Stateside, this may mean skyscraper-high red velvet creations, elaborately decorated with Japanese cherry blossoms made of ultra-sweet icing. In France, the skyscraper resembles a pyramid, and icing often finds itself replaced with amber caramel. Wedding goers, meet the pièce montée.

From a pure definition standpoint, pièce montée, which literally translates into mounted piece, can designate all sorts of confections. If we refer to the French Academy dictionary, the pièce montée consists of pastries assembled together in an ornamental fashion that stands out by its height, and is reminiscent of architectural forms. “Well hey, that’s exactly like our American cakes!,” you might be thinking – and you would be exactly right. In definition, classic American wedding cakes are pieces montées.

Now that you’ve thanked us for finding a novel, elegant way to introduce the cake at your upcoming wedding, it’s worth noting that most wedding cakes in France are a specific type of pièce montée. This one is a tad bit harder to pronounce: croquembouche, a word created from “croque en bouche”, or “crunches in your mouth” – with an idea of something snappy, like hard and thin layers of caramel.

The croquembouche was invented by famed baker Antonin Carême, who is credited with creating a vast majority of the fundamentals of traditional French cuisine and pastry, in the early 19th century. Throughout his career, Carême lived in multiple European capitals, delighting the palates of royals and kindling his innovative fire with a fascination for the world’s architecture. Cook to impress was his modus operandi, so it’s no wonder a mile-high dessert was born from his imaginative mind.

When first created by Carême, the croquembouche was an assembly of dried fruits and nuts, held together by caramel. With time, however, the croquembouche evolved to become what it is today: a plethora of little choux, filled with pastry cream and bound together with caramel, styled in expert strands, that adds the crunchy component to the pillow-soft creaminess of the choux. The choux are piled up to resemble a high cone, and guests help themselves to as many choux as their stomachs and sweet tooth can handle after a few hours of foie gras and champagne.

France celebrates many moments throughout life, most of them linked to the country’s historically Catholic culture. If you grow up in France, you’re bound to sample a croquembouche at baptisms, communions, confirmations, engagements, but also fifty-year wedding anniversaries, retirements and birthdays. Traditionally, and throughout all social classes, the croquembouche is the dessert par excellence to mark a special moment in life.

“The same dessert all life long? You mean you eat the exact same cake every time?” Here’s where, yet again, the French tradition of festive cakes has a trait in common with its American counterpart. Decoration is everything. Granted, the basic recipe of croquembouche might remain the same, but the added decoration is where bakers show their expertise and make the pièce montée shine.

To the choux and caramel, fine sheets of nougatine – crispy, thin nut brittle – are added in various shapes depending on the occasion. For a wedding, you might see a croquembouche with nougatine doves and a nougatine ribbon displaying the name of the bride and groom. Nougatine flowers peppered with colored icing bring the dessert to life and lend it the festive appeal fit for a wedding.

With a croquembouche, it may admittedly be hard to reach the chromatic level of an Ace of Cakes design. Some modern French brides, inspired by Pinterest and Instagram, are turning to American-style cakes to achieve that pop of color or shying away from a large cake completely in favor of smaller desserts served à l’assiette (plated).

For the more traditional brides, and for all of us guests, it has to be said that there is something comforting in the familiarity of a dessert that you have grown up with and that has followed you throughout life. The croquembouche immediately sends out a message of gathering, a special moment to be shared, and a sense of belonging to a centuries-old tradition that’s nowhere near extinction.