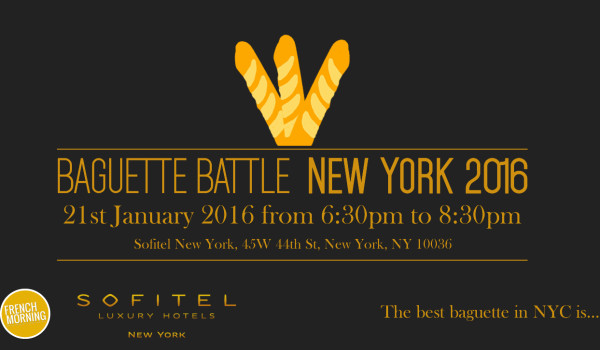 Who makes the best baguette in New York City? The answer has never been closer: on January 21st at the Sofitel, a jury of chefs and food writers will crown a winner, and you can help.

This fall, French Morning launched the Baguette Battle, with thousands of readers nominating their favorite bakeries for the city’s best baguette. Now, as we approach the dead of winter, the competition heats up: twelve finalists will face off in the long-awaited final of the Baguette Battle. Who is confirmed to bring the pain?

The good news: the event (and the bread) is open to the public. And since we’re not animals, there will be an over-abundance of cheeses and charcuterie (thanks to our sponsor, D’Artagnan), as well as (and of course) wine.

While the attendees sample the selections, the jury will deliberate over a blind taste test of baguettes and other finalist breads. And our jury, they know taste:

— Charlie van Over, bread expert, bakery consultant, and author of The Best Bread Ever.

This jury of experts will award the competition’s Grand Prix; the public—that’s you—will also decide who wins the Readers’ Prize, which will remain secret until the announcement on January 21st!

Register now: the first 50 people to sign up will receive a 50% discount on tickets!