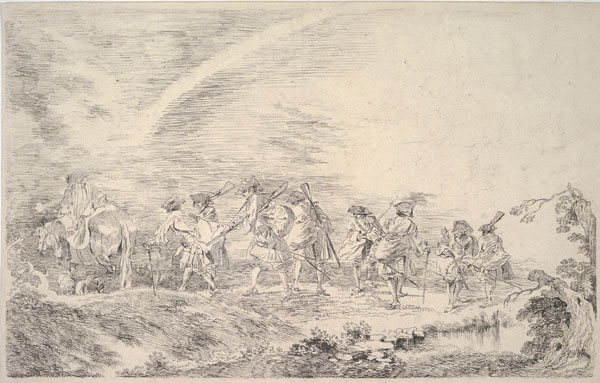 Artists and Amateurs: Etching in Eighteenth-Century France at the Metropolitan Museum

Every curator loves to discover some little known aspect of art and bring it to the attention of the public. For this reason, Perrin Stein, curator in the Metropolitan Museum’s Department of Drawings and Prints, took great pleasure in putting together the delightful “Artists and Amateurs: Etching in Eighteenth-Century France”.

The exhibition runs from October 1-January 5, 2014. It includes 130 etchings by such major artists as Antoine Watteau, François Boucher, Jean-Honoré Fragonard and Hubert Robert as well as by their patrons, Madame de Pompadour, the mistress of King Louis XV, among them. Open to the art of other countries, they looked to Rembrandt and Castiglione for inspiration and took as their subjects historical and Biblical scenes, portraits and landscapes.

In a rare instance of artists teaching their skills to men and women of the social elite, people from various walks of life came together in this period to learn and perfect the highly accessible printmaking technique that resembles drawing. “This whole body of work has been completely neglected,” says Stein, “largely because paintings are usually considered more important than smaller works. These etchings share a wonderful delicacy and intimacy and were meant to be handheld in order to see all the detail. Although visitors can’t hold them in our exhibit, we’ve made it possible for them to get close.”

At first a stylized technique only available to the highly trained, etching became simpler when artists discovered that they could coat a plate with varnish and draw on it with a stylus. Many of those who struggled financially then began earning money by making copies; for instance, Bouchard learned his craft by making etchings of all Watteau’s works. Yet when they achieved success, they continued etching, finding that it allowed them stylistic freedom and the opportunity to experiment and to interact and exchange ideas both among themselves and with their patrons, without having to answer to the demands of the market place.

One the most exciting consequences of the popularity of etching was that “artists otherwise trained as architects, portraitists, or painters,” says Stein, “discovered in themselves not only a natural facility for the medium but a determination to push it to new heights.”