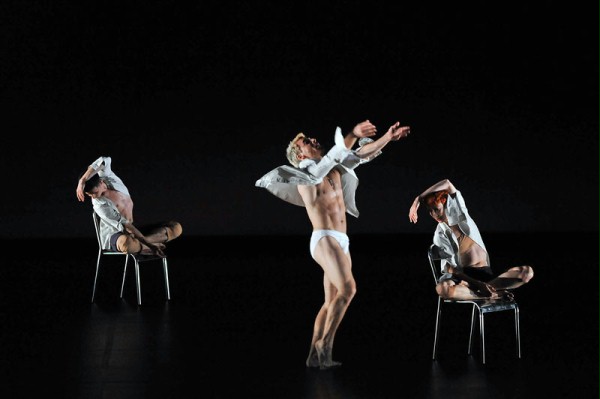 Most choreographers wouldn’t dream of taking on the Apocalypse of St. John as the subject for a dance. Usually only big budget film companies go in for such grand topics.

But then most choreographers don’t think like Angelin Preljocaj, who comes to the Brooklyn Academy of Music November 7-9 with “And then one thousand of peace”. Director of 26-member Ballet Preljocaj, based at the National Choreographic Centre in Aix en Provence, he has created more than 45 provocative works since founding the contemporary troupe in 1984, as well as commissions for the New York City Ballet and the Staatsoper in Berlin, among others.

“And then…” features electronic music by DJ Laurent Garnier, mixed with samples of Beethoven, and striking staging by artist Subodh Gupta.  “Preljocaj is a clever choreographer,” Judith Mackrell wrote in “The Guardian,” on its premiere in London in 2012, “superb at eliciting a raw, uninhibited physicality from his dancers, yet equally skilled at distancing the images of lust and anger he creates, and making them compellingly strange.”

The work grew out of Preljocaj’s experience with the Bolshoi Ballet in 2010. Called upon to set a dance from his repertory on the company, he changed his mind when he met the dancers, deciding to create a new piece for them. He proposed that it be performed by a combination of his dancers and members of the Bolshoi Ballet. While considering what he should do with these two groups of people, he decided to re read the Apocalypse of St. John. A fortuitous decision. “I thought, wow,” he says “it is a very nice thing, because there is a lot of metaphor, a lot of images, very powerful. St. John was talking about the seven Revelations. Wasn’t it true that the two nations collaborating on this project, France and Russia, both had very violent histories and volatile revolutions in their histories? The French with their 1789 revolution and Russia the 1913 Bolshevik revolution.” With these thoughts in mind, he began the dance.

A native of Paris born to Albanian refugee parents, he first studied classical ballet before turning to contemporary dance, which he studied with Merce Cunningham and other leading choreographers. Consequently, he brings elements from all forms of dance into his choreography, combining them with his own distinctive sizzle, sensuality and philosophical point of view. “For me,” he says, “what’s important is to ponder our present times and the society we live in.”