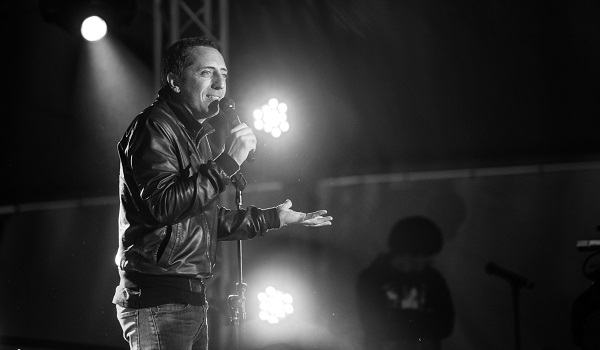 “So, they announce a guy from France and everyone leaves, is that it?!” Climbing the stage at Austin’s Fun Fun Fun Festival on Saturday afternoon, Gad Elmaleh had to fight to win over the audience. It made for a drastic change for the star, who has enjoyed massive success as a comedian and actor in the French-speaking world and who has a child with Charlotte Casiraghi, the great granddaughter of Princess Grace of Monaco. Elmaleh is probably best known to American audiences as the bumbling private detective in Midnight In Paris.

Without a doubt, he wasn’t in France anymore. The audience had come to see Wu Tang Clan’s GZA, who had 25 minutes to woo the crowd; Elmaleh only had 10 minutes (versus fifteen planned minutes) to perform his set in English.

Making fun of Americans’ speech and geographical illiteracy, however, the charming Elmaleh made quick work of the audience at Fun Fun Fun, a festival known for showcasing new and emerging talent. He warmed the room up by talking about his first contact with Americans, who couldn’t remember their French classes.

To those who wonder why the Franco-Moroccan star would do a show in English, he responds, “I needed to challenge myself, and now… I’m living the American dream.”

The show, worked out over two and a half weeks in New York earlier this fall—two years after his first performances in English—was thus launched, and the comedian could combine jokes about the differences between French and American culture—on fighting terrorism, vacation, or love—plus a nod to Texas, which Elmaleh was visiting for the first time: “The American dream in Texas. Mmm… I didn’t expect that!”

Hours later, the Austin audience had a new encounter with the star at the North Door, a bar downtown. In the Texan capital, as in all cities of his US tour (Dallas, Vancouver, Portland, Seattle, San Diego, San Francisco, Philadelphia), his international audience is gobbling up tickets.

The room was frenetic with the noise of the French diaspora, but the show had nothing to do with that: “Bon soir, ça va?” Elmaleh said, launching into his set. “That’s the only French you’ll hear tonight. I’m not doing my French show for twenty dollars.” The comedian did make several asides in French and Arabic, however.

“My English-speaking American audience is composed of people who have connections with the French world,” Gad Elmaleh acknowledged to French Morning in a posh hotel in downtown Austin—but not the hotel where Elmaleh spent the night. “Promoters put you up in cheaper hotels when you play the smaller rooms. I’m twenty minutes from downtown,” said the artist, who is not dissatisfied with this radical change.

This “new life” with his “feet back on the ground” allows him to walk the streets in peace, even though it’s harder to work every day, improving his English constantly, when deprived of the comforts usually reserved for stars of his stature.

In the wake of the show at Fun Fun Fun Festival, Elmaleh seems to still be processing the shock of that first performance as part of an American festival. “What you saw, me performing while people walk out, is one of the hardest things I’ve ever done,” he says bluntly, “If there were crowd before the show, it was probably by mistake.”

“I’m truly starting from scratch,” Elmaleh said. “ I have to memorize my lines and rely on a list of the main ideas written in English, when I could comfort myself by using French keywords.” He said that it’s a difficult process, but necessary if he wants to be convincing to an American audience. “I believe in the American dream, of course—although I think it requires some manhandling.”

“There’s an audience for what is original and unique here. When you see these people in the room who are discovering you for the first time and are laughing, you say, ‘Merci.’”

The greatest gift that Gad Elmaleh’s francophone fans living in the United States can give the star is to bring an anglophone friend to his show. But in Austin, it seems like most expats’ English-speaking spouses stayed home.

He still hasn’t grabbed the brass ring, but Elmaleh seems to be winning over his English-speaking audience. After the performance at Fun Fun Fun, a young Austinite expressed a desire to find out more about Elmaleh and discover other francophone comedians. Standing at the exit of the show, the local said she was not worried that Americans would take offense at Elmaleh making fun of their shortcomings or their customs, because, of course, “He makes fun of everybody.” 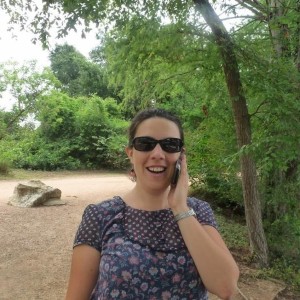