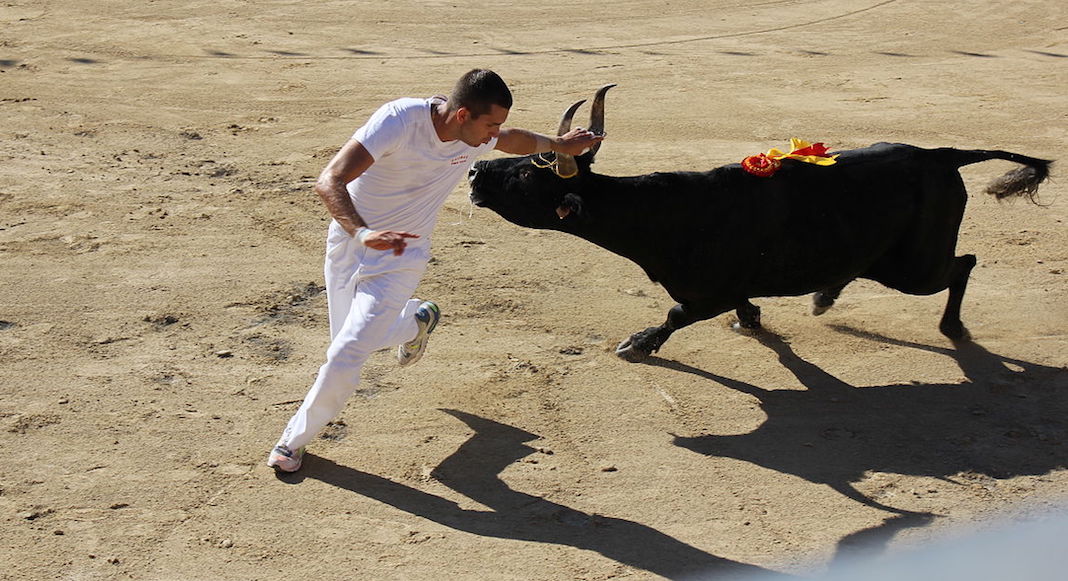 11 Traditions from the South of France that Everyone Should Experience

France is a country with a lot of traditions, and some of the best come from Provence. Here are a few fun ones to experience on your next visit.

The sport of Course Camarguaise lets the young men of Provence show their bravery and daring. Or maybe their stupidity. In a Course, a bull has ribbons and other doodads attached to its horns and the razeteurs (bold young men) have to get them off. It’s a sport that involves a lot of sprinting and jumping, and the traditional outfit includes tight white pants. Very popular with the ladies.

Go to any Provencal village and you’ll find old guys standing over metal balls and arguing. They are playing pétanque, where points are awarded based on whose ball is closest to the cochonnet. This sometimes leads to arguments, most of which are soon forgotten over a glass of pastis. The game is easy to play so try it yourself!

For centuries, shepherds walked with their flocks to higher pastures for the summer, passing through village after village in what was called the transhumance. While the sheep mostly ride in trucks these days, the tradition is remembered in transhumance festivals where thousands of sheep, along with shepherds, sheepdogs and the occasional goat, parade through town before adoring crowds. But after all those sheep, it’s advised to look where you walk before crossing the street!

Provence produces most of the truffles in France and this “black diamond” is precious indeed. So precious that the town of Richerenches holds a Mass every January where the truffles are blessed by the local priest.

On Christmas eve, you’ll want to go to Midnight Mass in Provence because of what you get to eat afterwards—not one, not two, but thirteen desserts. Talk about an incentive to stay up late!

6. Gypsies to the Sea

Remember how in The Da Vince Code, Jesus and Mary Magdalene got married, moved to France and started a royal dynasty? Author Dan Brown wasn’t the first to think that Mary Magdalene came to France.

Provence legend has it that after the crucifixion, she was cast out to sea in a boat without oars or sails and left to die. Joining her in the boat were Mary of Bethany, Martha, Lazarus and other Biblical figures. Guided by the hand of God, the boat landed on the shores of Provence.

This event is commemorated every year in May bye a huge festival in the town where the boat landed, Saintes-Maries-de-la-Mer. Saint Sara, who was also on the boat, is venerated by Romani gypsies and tens of thousands make the pilgrimage to participate.

7. Telling the Legends of Provence

The Tarasque once lurked beneath the waters of the Rhône River, coming out to feed on the people who lived along its shores. It was a huge beast that breathed fire and smoke and was so clever that it was never trapped. Saint Martha, who was on the boat with Mary Magdalene, finally subdued the Tarasque with the sign of the cross and ended its reign of terror.

The Drac was another monster that lived in rivers and lakes, luring people to their deaths by floating precious jewels on top of leaves, kind of like fishing lures, but in reverse.

8. Put on your best Arlesienne

The traditional lady’s outfit is called l’Arlesienne, after the Provencal town of Arles. Women wore this regularly until the early 20thcentury, and it’s still popular at local festivals.

9. A Procession for Water and Wine

Centuries ago, Saint Gens left his hometown of Monteux to live as a hermit among the barren rocks of Le Beaucet. During a long drought, the local people begged him to help bring rain. After a night of prayer, storm clouds appeared and the drought was ended. Not only that, Saint Gens also poked two of his fingers in a rock and soon streams poured forth from the holes—water on the left, wine on the right (this is France, after all). Saint Gens is remembered every year in an 8-mile procession that goes from Monteux to Le Beaucet.

The untamed south of Provence is the Camargue, famous for its bulls, wild white horses, and pink flamingos. Watching over them all are the gardiens, both women and men, the French cowboys who still live as their ancestors did long ago. Many festivals include gardiens who guide charging bulls through city streets in an incredible display of horsemanship and bravery.

Saint Eloi is the patron saint of horses and so on one day each year they don’t have to do any work. Instead they are paraded through town wearing colorful harnesses and are blessed by the village priest.