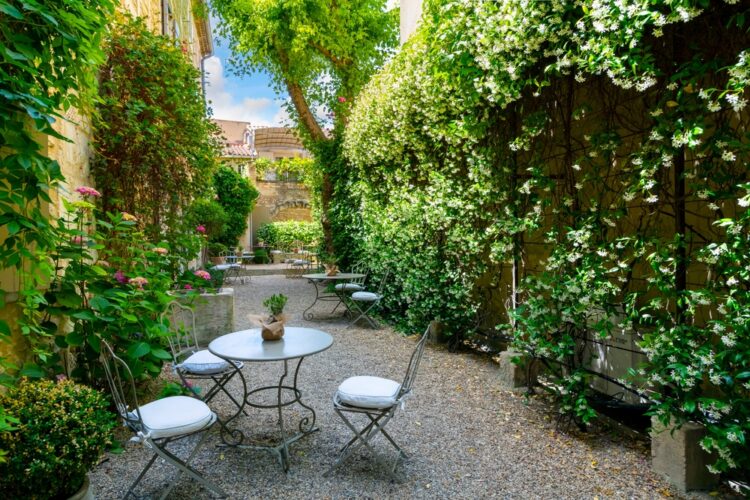 9 Classic Provençal Dishes to Try Before the End of Summer

From simple dishes dating back to the tiers-état (third estate) to the opulent culinary canon, Provence is home to classic and summery French dishes. These are some of the can’t-miss specialties found in that special corner of the south of France. 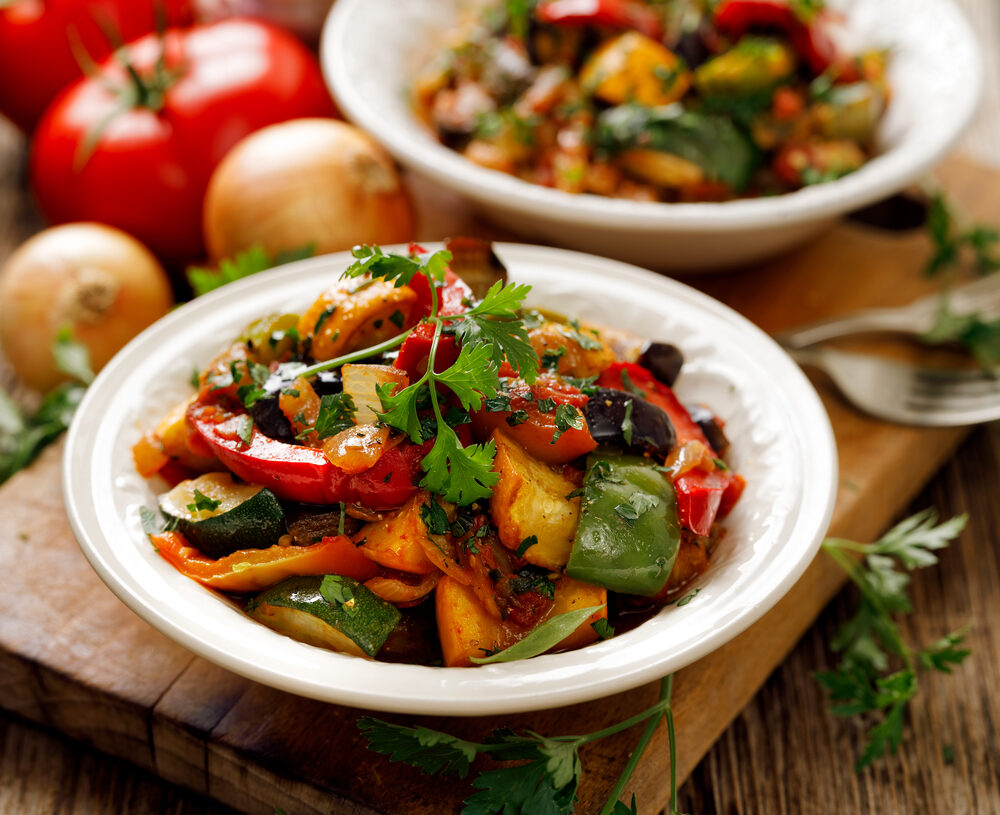 No, it’s not just a cute animated children’s movie about—of all things—a rat who likes to cook. It’s actually a vegetable stew originally made by peasants in the South of France (particularly in Nice) when they didn’t want to waste a bunch of random ingredients. Ratatouille is tomato based, with zucchini, eggplant, onions, and a variety of spices, and it is slow cooked until the vegetables gain a smooth, creamy texture. 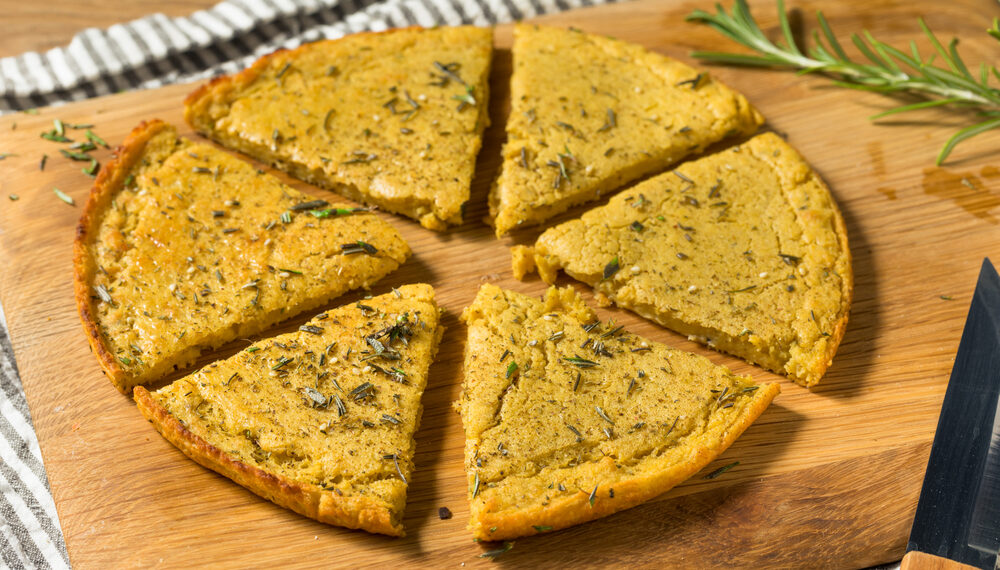 Like many of these dishes, Socca is an example of Provence’s Mediterranean influences, both Italian and North African. Socca is a thin, unleavened pancake made from chickpea flour. It’s typically baked in a tinned copper plate as a street food in Marseille or Nice. 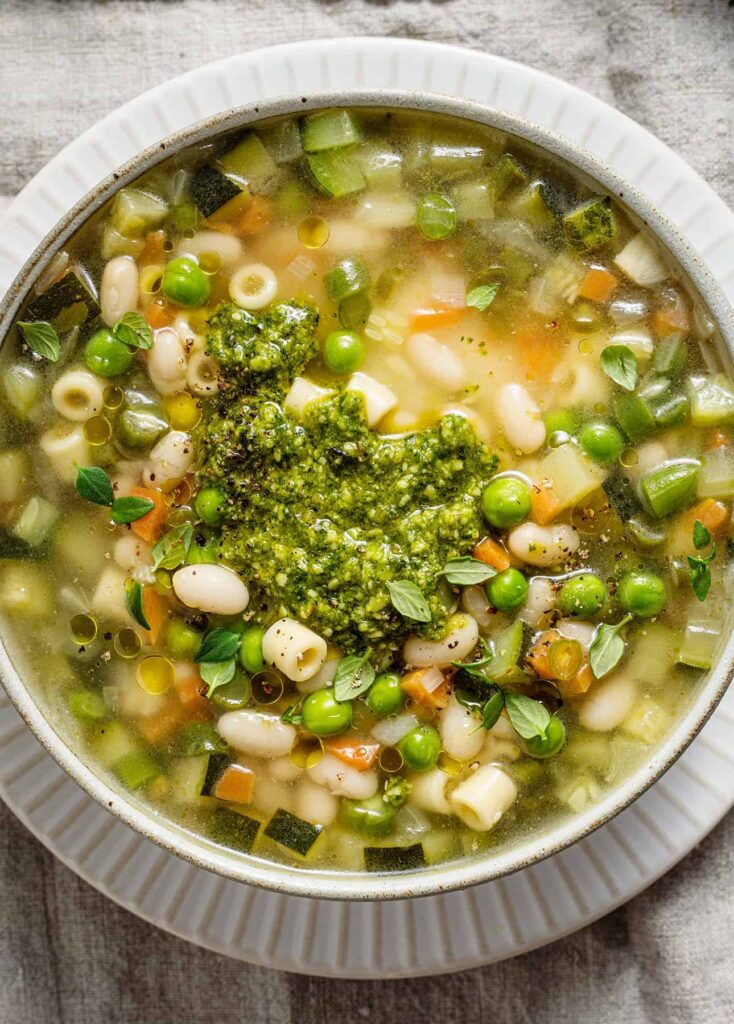 This vegetable and bean soup is similar to the Italian minestrone, but a bit tapered down, and designed to highlight the vegetables of the season. White beans, tomatoes, onions, green beans, squash, and pasta are common ingredients. And the coup de grâce is the spoonful of pistou, pesto made without pine nuts, plopped right on top for you to stir in. 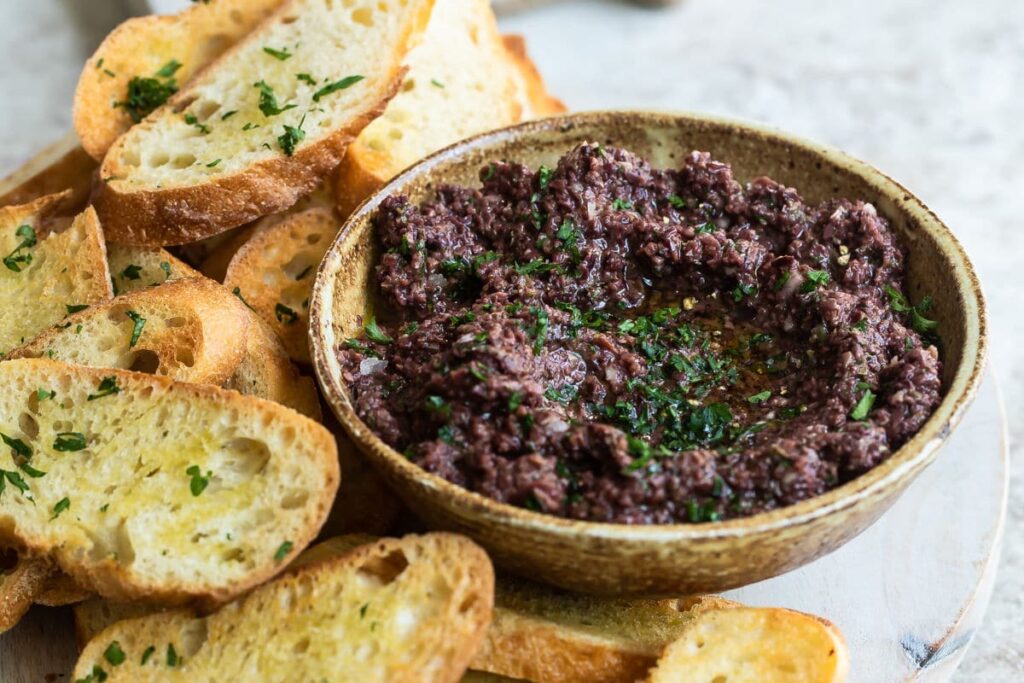 This simple spread is made from finely chopped or pureed olives, capers, and olive oil. The name comes from the Provençal word for capers, tapenas, and is often served with bread for an apéro or used in fish or poultry dishes. 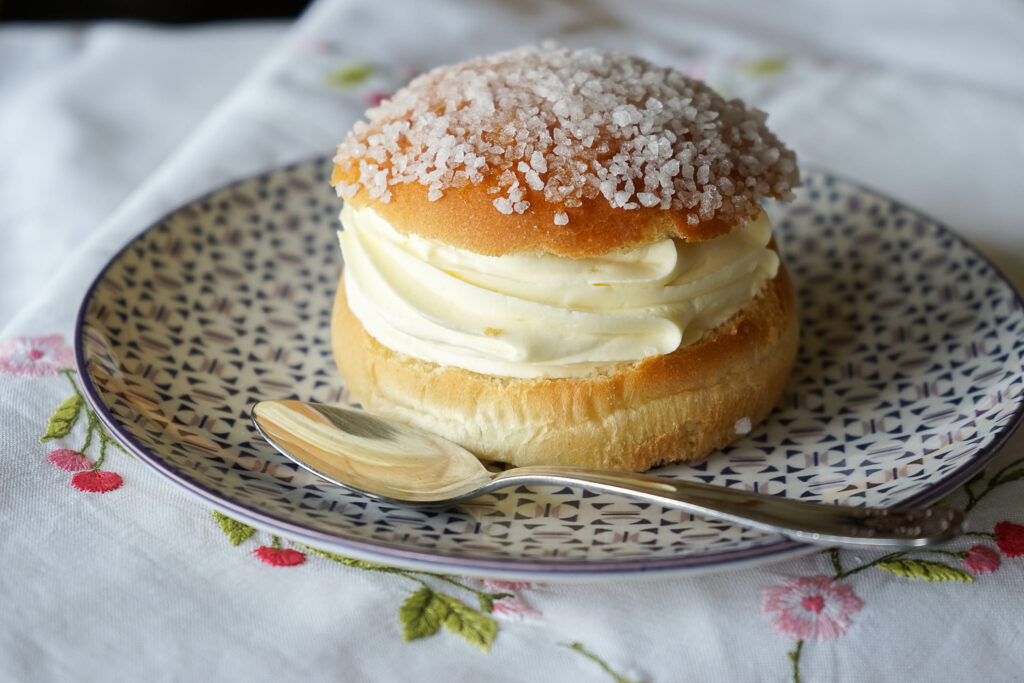 Invented in St. Tropez off the Côte d’Azur, this dessert became a favorite of actress Brigitte Bardot when she was filming the movie And God Created Woman. Bardot even suggested the name of the sugar-coated brioche cake filled with sweet cream. 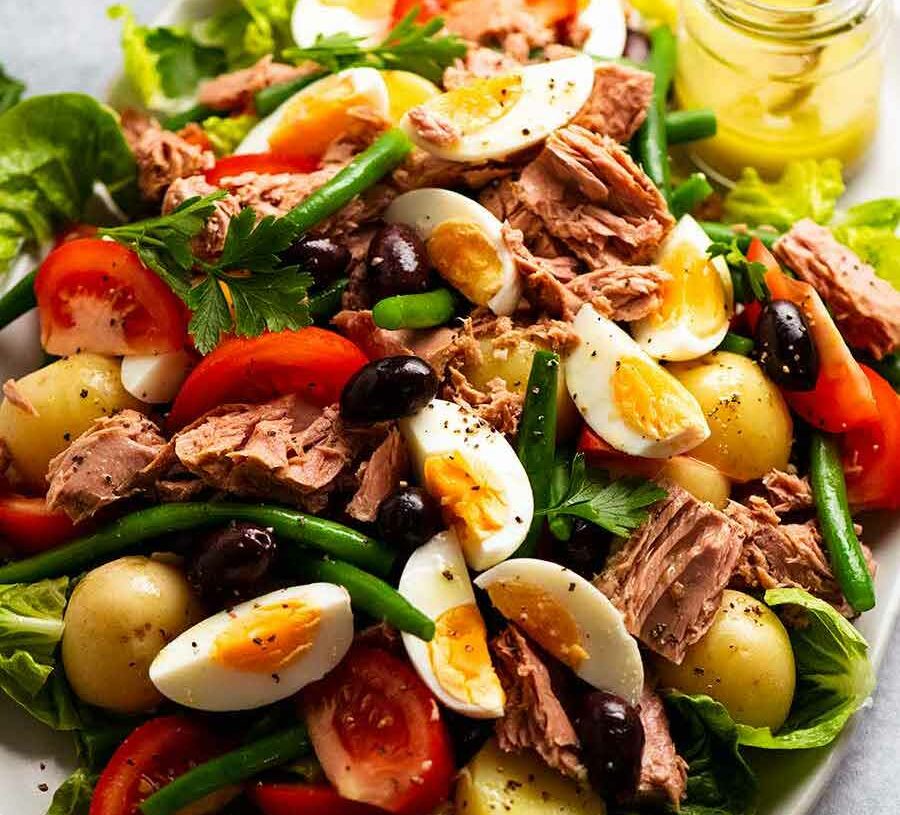 As you may have guessed, this salad comes from the sunny beachfront town of Nice. Though many chefs debate the precise ingredients — to the point of a perennial culinary controversy — it generally includes hard-boiled eggs, anchovies, tomatoes, canned tuna, and lettuce. The dish originated as a poor man’s “kitchen sink” style food, made with anchovies and whatever seasonal vegetables were available. The salad was popularized in the U.S. with its recipe published in Julia Child’s Mastering the Art of French Cooking in 1961, a non-traditional recipe using potato salad and blanched green beans. 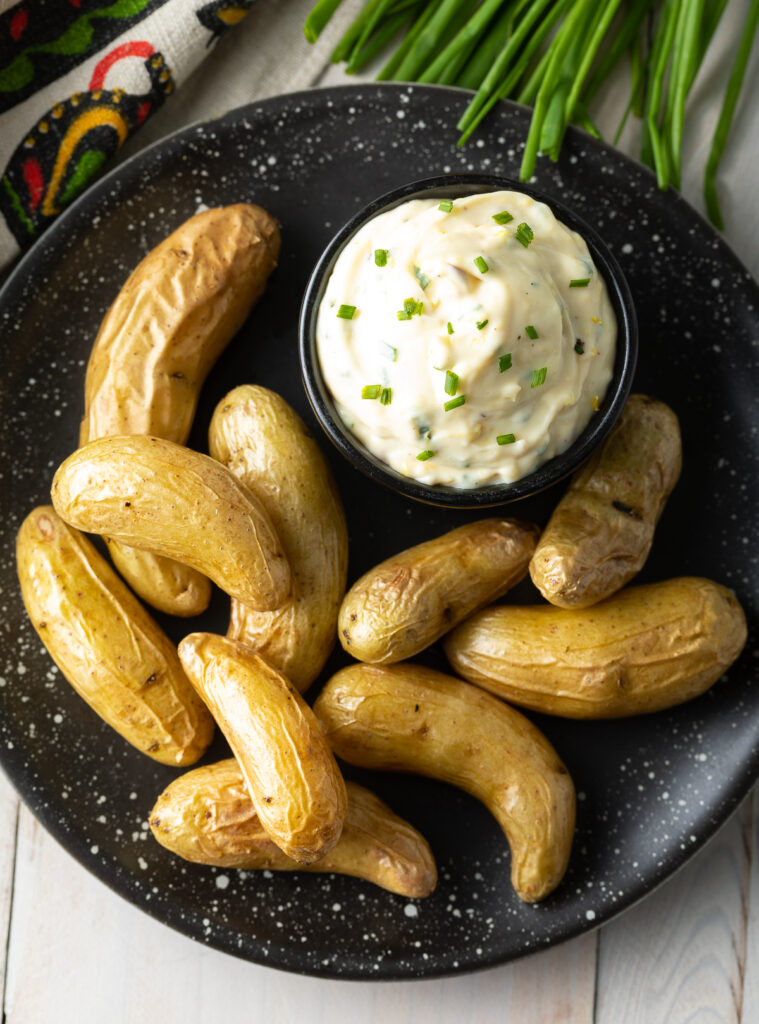 It’s hard to get more basic than this garlic and oil spread, whose name literally means “garlic and oil” in the Provençal dialect. It’s essentially a garlicky mayonnaise used for dipping fries, or as part of an elaborate crudité platter called the Grand Aioli. Serve it with anything dippable, whether fresh or fried. 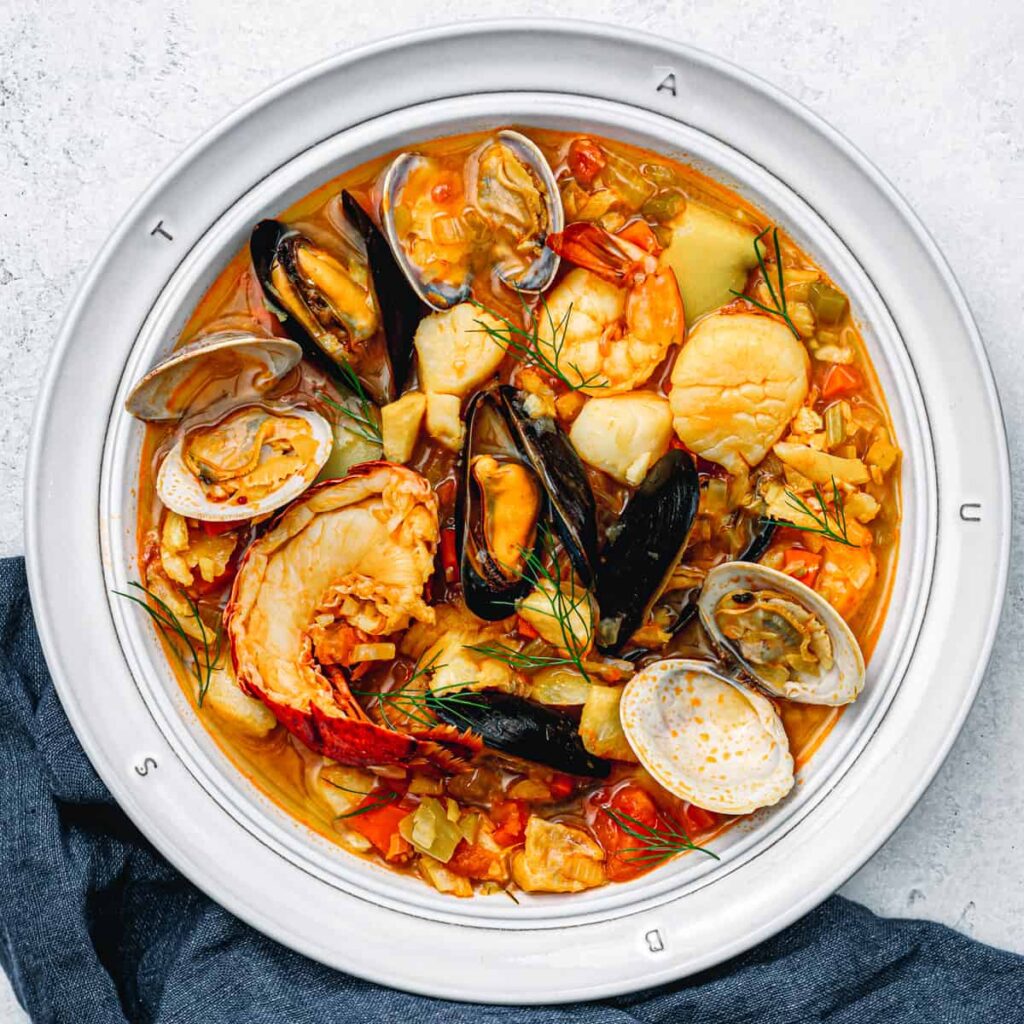 The dish the port city of Marseille is most famous for, bouillabaisse is a fish stew invented by resourceful fishermen to use the fish they caught but couldn’t sell. Mainly they used rockfish like red rascasse, sea robin, and European conger, all bony fish that didn’t do well on the market. It can also use mussels, octopus, and crab, and the broth tends to include veggies like leeks, potatoes, and onions. When the stew is served, the broth is typically served first, with slices of bread and a spread called rouille, and the fish is brought separately and added to the broth. This Julia Child recipe is low on rockfish, but contains ingredients you’re more likely to find at a market in the U.S. 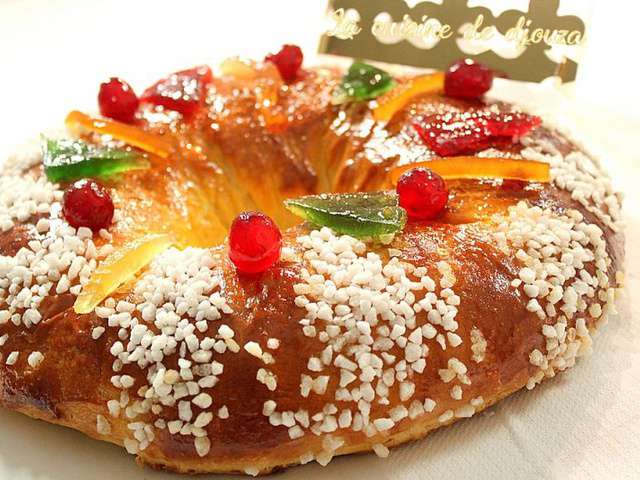 This variation on the traditional galette de rois is a little bit different in the South of France, made with candied fruits and more of a brioche-style bread. Whoever finds the fève baked into it gets the luxury of being king for a day.