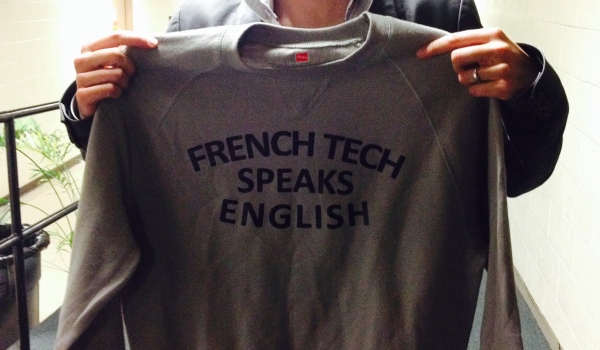 There have never been so many French start-ups in New York. The French consulate has counted some 200 tech businesses launched by French entrepreneurs within the last few years in every domain from data to dating. Here are some of the standouts to watch in 2015:

Mathieu Vaolatto’s start-up, which sells works of art online, raised $1.9 million this fall. It offers only limited and numbered series of digital works. The company is based between Paris and New York and has carried out half its sales through its site and the other half through distributers like Gilt and Fancy.

This app hit the virtual shelves of the Apple Store last September, and you can use it to leave voice messages with your correspondent via a pretty, colorful interface. Frenchman Thomas Gayno co-founded the company with a former colleague after the two left Google. It’s based in Brooklyn and has raised $1.8 million, much of it from Google investment funds.

Benjamin Bernet, a former L’Oréal employee, came up with 1.5 million dollars in 2013 in order to launch Doobop, an e-shop for beauty products developed for “brown skin and curly hair.” The site rose to prominence quickly thanks in no small way to Oprah Winfrey who has spoken about Doobop on several occasions. Bernet, who has a staff of four based in New York, is currently concluding his next round of fund raising.

A dating site that lets people narrow their search for love to alumni and current students at their alma mater, Date My School was founded three years ago by Jean Meyer, an engineer from Toulouse who was finishing up his MBA at Columbia. Based in Brooklyn, this start-up has raised $3 million since its creation, employs a staff of ten, and boasts a million users.

Described as the “YouTube of 3D,” Alban Denoyel’s Sketchfab allows people to display 3D files, including drawings and objects, on the web and make them available to download for 3D printing. The platform launched in France in 2012 and has continued to grow in New York since 2013. The start-up received an award from the TechStars incubator and has raised $2.5 million, employs 10 people in Paris and 5 in New York. Sketchfab also recently signed a partnership with the British Museum, which launched an exclusive collection through the platform that is free to download and is 3D printable.

Florent Peyre and Alexandre Winter are the brains behind this big-data jewel, which uses a specially-designed box to count the number of people passing in front of a store, crossing a street, or waiting in line on the sidewalk. Placemeter raised $6 million in September, employs about a dozen people, and has received an award from the TechStars incubator.

This smart calendar created by Pierre Valade raised $6 million this summer just two years after it first launched. It’s a free app that allows users to consult all of their schedules and data from their mailboxes, cloud and social networks in one interface.

FreshPlanet has two games for mobile devices including SongPop, its star with nearly a million users per day. “We’ve passed the 100 million mark in terms of downloads,” says founder Mathieu Nouzareth who has been living in New York since 2010. He plans to launch four new games over the next few months. Freshplanet employs 35 people in New York and has raised $10 million since its creation.

Adore Me is Morgan Hermand-Waiche’s online lingerie shop. It launched in 2012 and since that time its growth has been exponential. Its revenues are expected to pas $10 million in 2014. Inc magazine ranked Adore Me 2nd for growth among e-commernce start-ups in the US. The site has raised $11.5 million since it was created and has a staff of about 50.

PeopleDoc is a start-up that was launched in Paris in 2007 and is exploding in the US. It allows human resources departments to go completely paperless by converting everything from pay sheets to work contracts to performance reports to their digital forms, and allows employees to access these files via the cloud. Two years ago, founder Jonathan Benhamou moved his company’s headquarters to New York, and he raised $17.5 million in May.

Emmanuel Schalit’s Dashlane has become an essential presence in the world of digital identities. His app allows users to manage and secure their many passwords and payment methods. With headquarters in Paris and New York, Dashlane has a staff of about 40 and raised $22 million in the spring, bringing its fundraising total to $30 million since its creation in 2009.