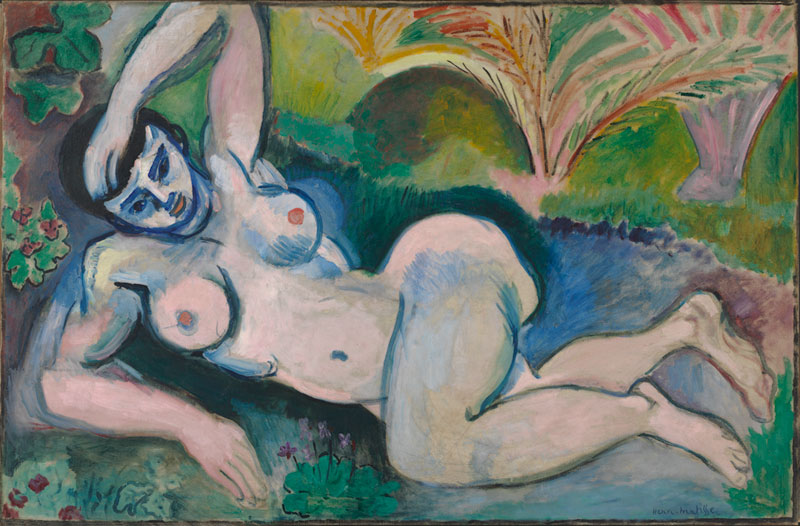 Few art exhibits have caused such an uproar as the Armory show in New York City in 1913. In the 30,000 square foot drill hall of the Armory at Lexington Avenue and 25th St, 18 galleries presented 1400  paintings and sculptures by 300 artists.

Though Americans and Europeans were equally represented, it was the European avant-garde, particularly those from France, Marcel Duchamp, Henri Matisse, Pablo Picasso, Francis Picabia and Constantine Brancusi, most of them new – and shocking – to most Americans – that had everyone talking. Artist Marsden Hartley compared its effects to that of an earthquake. Suddenly, the public was confronted by works that were not instantly intelligible.

To celebrate the exhibit’s 100th anniversary, the Historical Society is putting on view 100 masterworks from the 1913 Armory show, including then controversial, Henri Matisse’s “Blue Nude” (1907), Marcel Duchamp’s “Nude Descending a Staircase” (No.2) (1912) and Francis Picabia’s “Dances at the Spring” (1912). It will also feature major paintings by Americans, John Marin, Albert Pinkham Ryder, and Europeans who had come to be accepted, precursors to the new avant-garde, Paul Cezanne, Paul Gauguin and Vincent van Gogh.

“The Cubists and Fauves were the most daunting,” says Orcutt. “The Duchamp painting with its multi perspectives was something that had never seen before. Matisse’s `Blue Nude’ included blue shadows never associated with naturalism.” Art critic Duncan Phillips went so far as to say that Matisse’s “paintings are repellent because they turn humanity back to its brutish beginnings.” After New York, the exhibit traveled to Chicago and Boston, becoming a national event as audiences beyond the East Coast establishment were introduced to the European avant-garde.  In Chicago, students burned paintings by Matisse in effigy. Quoting  “The New York Times” in her excellent essay accompanying the show, she explains that the newspaper considered the new art part of a general worldwide movement to “disrupt and degrade, if not to destroy, not only art, but literature and society.… The cubists and futurists are cousins to the anarchists.”

Realizing that it might be difficult for audiences today to understand why these now acclaimed paintings would cause such consternation, Orcott explains, “In a period of widespread change and uncertainty, the prospect of evolution in centuries-old standards of art and beauty seemed to threaten the basis of Western civilization, particularly when accompanied by the term `Futurism,’ with its implications that it was the inevitable shape of things to come.”  She points out that the period’s social and intellectual changes, such as the women’s suffrage movement, workers’ strikes for better labor conditions and fair pay, were already fundamentally altering society as were architectural advances like construction of the new Grand Central Terminal and the Woolworth Building, which became the world’s tallest building in 1913.

In its show, the Historical Society offers a context for the legendary Armory exhibition with displays of  artifacts, historical documents and archival photographs. These include postcards of some of works, scrapbooks of press clippings, telegraphs, copies of newspaper and magazine articles and letters written by the artists, collectors and the organizers. It also plans educational programs, including talks by the curators. “For all the negativity that first greeted the exhibition,” says Orcott, “it did make modern art a subject of conversation. A new artistic language had to be dealt with.”