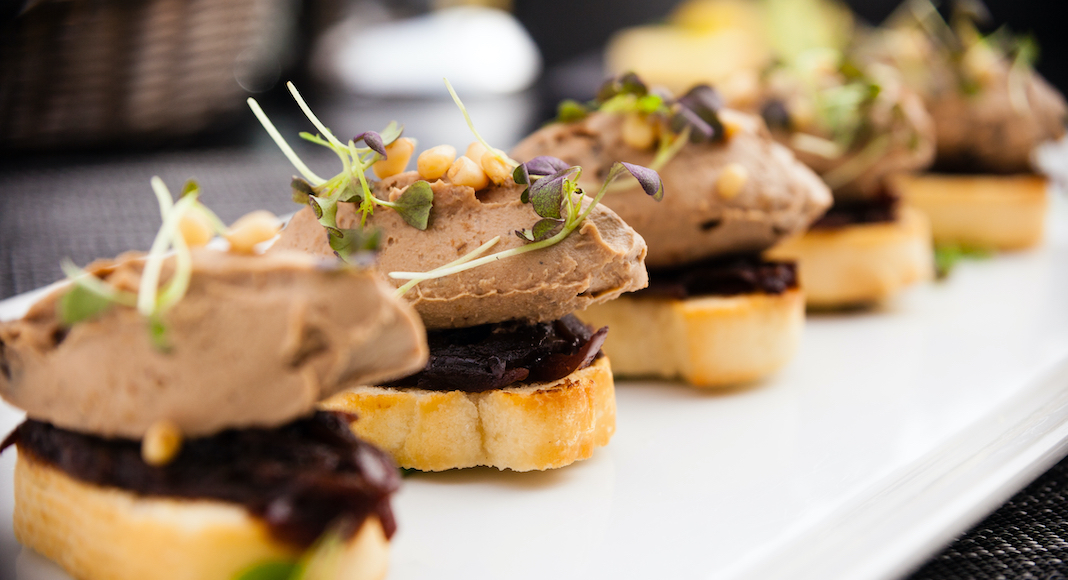 When ordering a charcuterie board, even the most diehard fans of cured meats like saucisson sec and chorizo can be stumped when confronted with the softer end of the meat selection. Dishes like pâté, rillette, and terrine are beloved by some and despised by others, but regardless of your position, you’ll want to be able to tell the difference, because the variations can be enormous.

Pâté is something called a forcemeat, i.e., a dish made from meat and fat that is either ground or pureed together to form an emulsion mixture. Spices and sometimes alcohol (like port, brandy, or wine) are added for flavoring, while milk, egg, or bread may be added to produce a certain texture. This explains why some pâtés are spreadable, while others are sliceable. Pâtés are usually made from organ meat, such as liver, which both gives the dish its famously earthy flavor, and also acts as a binding agent.

One common type of pâté you might come across is pâté de campagne, or country pâté, which is generally coarser than other versions, and pork-based.

Foie gras is also technically a kind of pâté, made from the livers of fattened geese or ducks. But it would be a major faux pas to refer to it as a pâté, because of its elevated status… kind of like ordering Wagyu beef and saying, “I’ll have a steak.” Due to the graphic nature of the process for fattening goose or duck livers, some places in the U.S., like New York City and the state of California, have banned foie gras on the basis of animal cruelty.

Sometimes pâté is baked in pastry, which is called pâté en croûte.

Terrine, or pâté en terrine, is a type of pâté, molded in a dish called a terrine. It’s common to see a terrine wrapped in pastry, or a terrine en croûte. But technically, a terrine doesn’t have to be a pâté, because it doesn’t have to be made of meat! Many other foods can be prepared in this style, as the porcelain or earthenware dish it is cooked in is the defining characteristic of a terrine.

Rillette, also known as potted meat, tends to be on the chunkier side. It is made from leg, thigh, shoulder, or rib meat (generally pork, fatback, duck, or rabbit), that is shredded and then cooked in its own fat, and later ground to create a spread. This means that rillette is technically a type of confit. The main difference between a rillette and a pâté is that in a pâté, meat and fat are combined before cooking, while with rillette, that process happens afterwards.

A mousse is light and airy, composed of cooked meat that is whipped with fat and then passed through a tamis (fine-meshed sieve). As you may have guessed, like a terrine, a mousse does not have to be made of meat, as it defines the preparation method, not the ingredients.

Aspic is a kind of savory jelly made with meat stock. It is sometimes layered over a pâté in order to preserve the meat and protect it from bacteria. You’d be most likely to see it in the upper portion of a slice of pâté en croûte, as the meat shrinks when cooked and creates an unseemly air bubble that some fill with aspic.