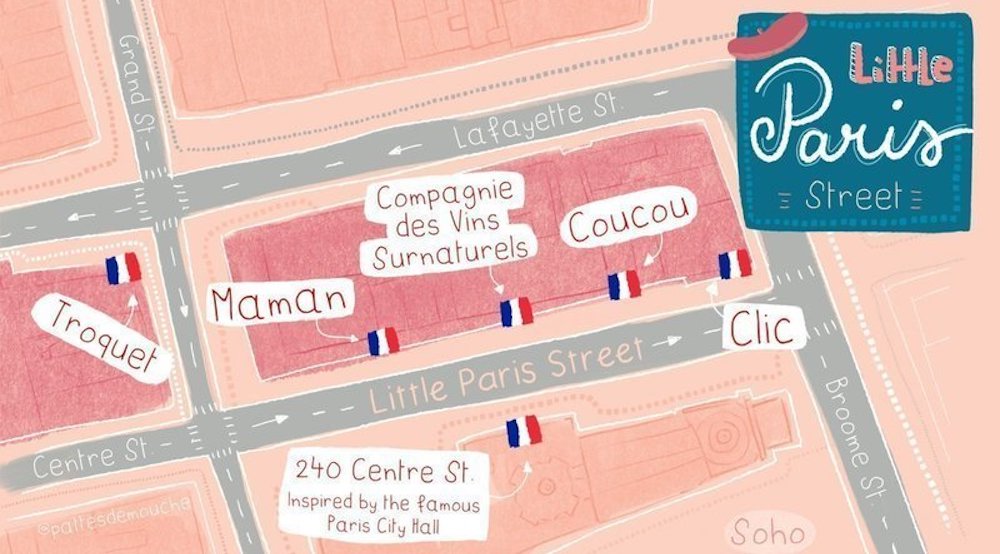 Little Italy, Little Russia, Little Senegal… why not a Little Paris in New York? Two French women proposed the idea in a petition, “New York’s Francophiles Need a Little Paris!”, posted Tuesday, June 4, on Change.org. Their aim is to name the part of Centre Street between Broome Street and Grand Street in Manhattan “Little Paris Street.” And, secondly, to change the name of the neighborhood from Nolita (North of Little Italy) to “Little Paris.”

Behind this initiative are Léa and Marianne Perret, owners of the Coucou French Classes language school located on Centre Street. “It was a French quarter until the 19th century,” explains Perret. In the petition, she refers to an article in Scribner’s Monthly, dated 1879, which describes the neighborhood as the “French quarter of New York.” More than a century later, this observation was confirmed by journalist Olivier Brégeard. Based on French business addresses listed by lawyer Augustin Maugé in 1864, he confirmed that the French community of the time was concentrated in southeast Manhattan.

Today, several French shops are still present. For the French teacher, “renaming the street and then the neighborhood would provide a place to express [her] Francophilia.” You have to wonder, is this a publicity stunt for Coucou? “It may have the potential to make us known, but we’re already well established,” says Perret, whose school welcomes 500 students every week.

She and Marianne, her cousin, are in contact with Community Board 2, the neighborhood council in charge of the Greenwich Village, West Village, South Village, NoHo, SoHo, Little Italy, Nolita, and part of Chinatown. The first condition to change the street name is to get 100 signatures on a petition. “We put it online on Tuesday and in 24 hours, the goal had already been reached,” says Perret, who still wants more signatures.

With the first hurdle surmounted, the Community Board will consider the application and, if it gives the green light, forward it to the New York City Council. They take it to a vote and, with a majority in favor, the street could be renamed, unless the mayor objects.

Nevertheless, for the Nolita area to become Little Paris, there are no steps to take since the change is informal (Nolita isn’t a formally named area). The two cousins hope that when passersby see the name Little Paris Street, New Yorkers will start calling the whole neighborhood Little Paris.

Perret says she has received comments from French people who live outside of Paris who do not like their country being reduced to Paris. “I myself come from a region (Toulouse) but behind the new name of the street, there is the idea of a Parisian brand, of shops that represent the capital,” says Perret. “It’s also prettier and more catchy.”